Would it be possible to have a giant velvet worm? Not huge but big, like the size of a small dog, 20 kilograms?

There are two major issues with scaling up a velvet worm: mechanical support, and oxygen transport.

Coconut crabs can get to be as large as a small dog, so clearly invertebrates with open circulatory systems as a general category can get that big, even in the current atmosphere. But crabs have some advantages over the much simpler velvet worms; for one, they have a rigid skeleton (usually considered a problem for scaling up invertebrates, but at this scale, its an advantage, as it would prevent the worm's flesh from simply collapsing into a blob); for another, they have a heart to assist in circulation. Velvet worms, on the other hand, have strictly hydrostatic skeletal support, and rely entirely on diffusion for oxygen transport.

So, now the question becomes "as big as a small dog in which dimensions"? If you just want it to be as massive as a small dog, that's not a problem--just make it really long. All of its tissues will be near the skin, so oxygen transport isn't a problem, and it won't be supporting much weight above the ground, so it won't smush itself.

Scaling up the body diameter is a harder problem, but the combination of structural support and oxygen transport issues might actually help solve each other. If the worm develops muscles capable of compressing the body wall laterally, it may be able to increase and decrease the internal pressure in particular segments to alternate between a flattened-out, gravity-dominated profile and a more circular, taller, pressure-supported profile. That won't work at arbitrary large sizes--eventually, muscles just can't be strong enough anymore!--but it should be fine for something with the diameter of a small dog's torso. And the alternation in shape would also serve to mix the haemolymph to improve oxygen transport. Even so, it will probably be a fairly lethargic creature, so as to minimize oxygen demands. 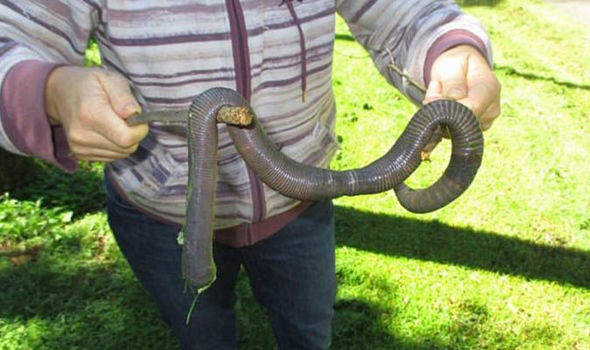 I am not attaching link to source because site of origin is doing sketchy stuff.

It is strange to me that the Gippsland worm is such an outlier, an order of magnitude larger than other soft bodied terrestrial organisms. I wonder if it uses the surrounding earth to support it in the way aquatic organisms do. These worms never look too lively in pictures.

Your dog sized velvet worm could be similar - maybe a predator inhabiting the burrows of something larger like the Gippsland worm or vertebrate burrowers.

Not in the current atmosphere, their breathing mechanism (trachea) and circulatory system (open) do not scale up well, it is the same reason we don't have large insects. Larger animals need have more complex and efficient breathing and circulation than velvet worms have to get enough oxygen out of the current atmosphere. During the carboniferous however oxygen levels were much higher so you did get insects almost as big as us, so a velvet worm that size would be no problem with a different atmosphere.

5
Making the Apocalypse Leech
5
Biological and ecological considerations for a giant worm
11
Building a Giant Spider
6
Making a slow orbit around a large gas giant
33
How would giant, secluded, underground-cave-dwelling insects get enough food?
3
Could a giant floating self-supporting city survive a thousand year voyage?
27
How big is my Giant?
6
Giant bug noises
4
What theoretically is the limit or max size and length for a serpent/worm before they get crushed by their own body?