How can my creature keep sand out of its mouth?

”The Dark God, the Tayan, was first formed when the gods above sent a curse down to the surface, to remind our people of our dependence on our gods. If the Tayan is not fed, it will rise from its slumber in the underrealm and devour the Cosmos”

I have been working on a creature lately, called the Tayan. It is a biologically engineered being, created by an amazingly advanced civilization to be used as a torture device. Creatures the sizes of Earth bears can be swallowed whole and land in the Tayan's stomach, where they are slowly digested over 5-30 years in agony.

The Tayan, during its adult stage, is immobile and waits for prey to fall into its sand trap. The sand trap is angled in a way so that when a creature tries to climb out, the sand crumbles away, and they fall into the Tayans mouth. Inward pointing, slippery teeth make sure that prey can't climb out, and its tentacles, mostly its main tentacle, help drag prey down.

Prey falls into the Tayan's throat. A muscular flap separates prey into one of two stomachs. Larger prey goes into the main stomach, smaller prey goes into the secondary stomach. Once inside their respective digestive chamber, prey is held back by tentacles to the Tayan’s stomach walls, were needle like tendrils inject prey with a paralyzing neurotoxin, that also causes intense pain. Prey wearing synthetic clothing can not be injected with neurotoxin.

Digestive juices slowly eat away at the prey's skin, until they resemble skeletons, with only their nails, hair and (sometimes) eyes still (mostly) intact. Full digestion takes 5 years in the main stomach, and 30 in the secondary stomach. Prey is alive during this entire process, as the Tayan injects their brain with nutrients, and acts as a biological dialysis machine. Intelligent victims have their consciousnesses saved by the Tayan, and essentially become one with the monster, living out the Tayan’s 10,000 year lifespan with it.

Here is a visual representation for your convenience. My main character is in the secondary stomach 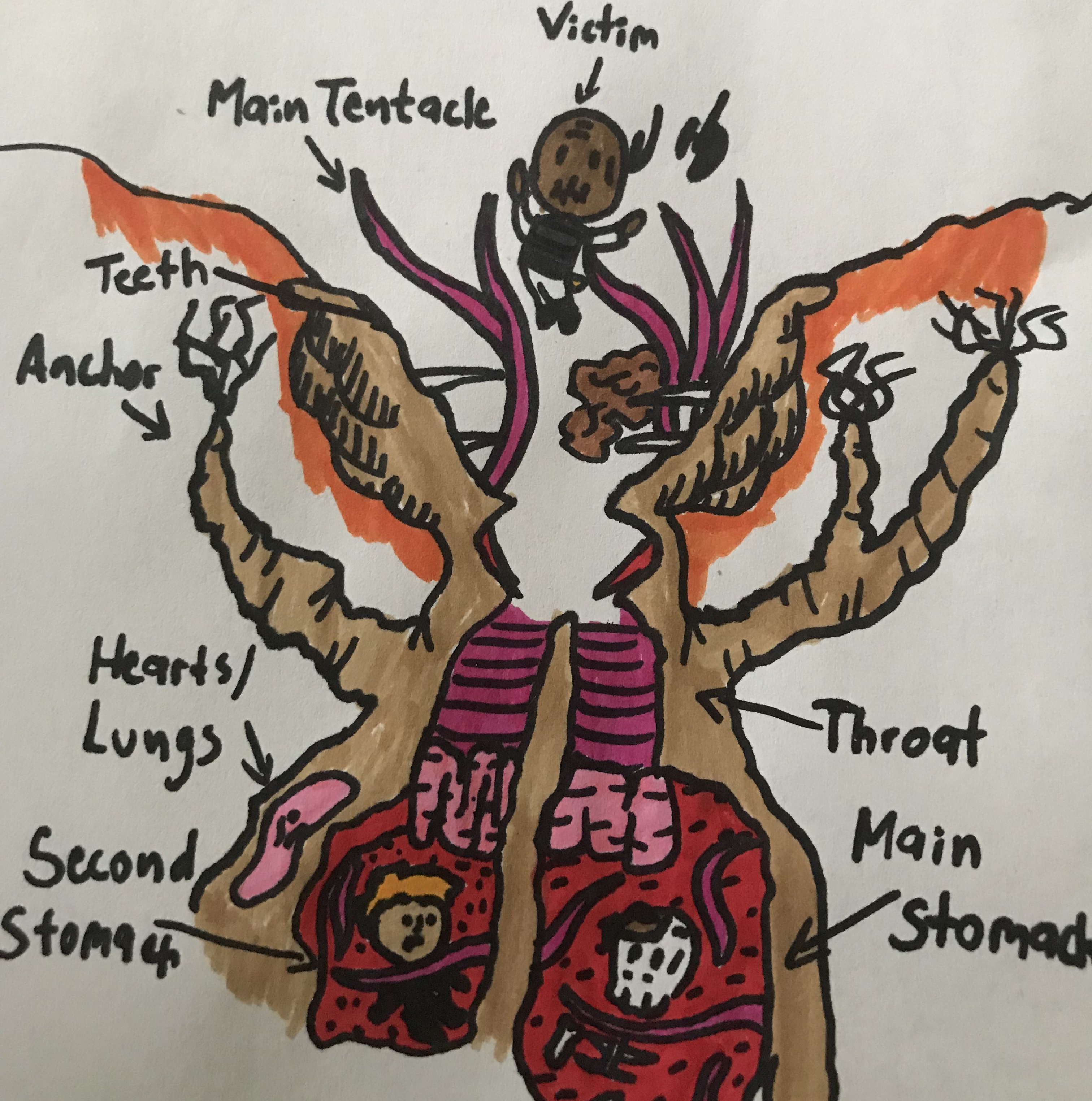 So, now that we have that out of the way, let’s cut to the chase. The specific Tayan in this drawing lives in a semi-arid climate, were sand storms often hit, and when prey struggles to get out of its mouth, sand falls into its mouth. The Tayan cannot digest sand at all, and if too much sand fals down its throat and into its stomach, it would die. So, my question is how could the Tayan keep sand out of its mouth?

What if some sort of symbiotic insect removed sand from the creature's body? The Tayan has its body cleaned, and in turn, the insects get to feed off of the victims. As far as the victims are concerned, its just another layer of torture.

Your creature can use a similar approach. Casually ingested sand can be agglomerated by some mucus contained in the upper part of the throat, and the balls of mucus and sand can be the simply spit out from the mouth of the creature.

For bonus, the creature can spread the mucus balls on the sides of the trap, so that when the mucus dries up it can leave the slippery sand in place.

Sand removal could work the way it works in oysters. The Tayan can form a pearl-like coating over the sand layer by layer. Then the Tayan can use its tentacles to move the pearls just outside the mouth of the Tayan. The pearls would be a status symbol for any warrior who manages to get to them without falling in. The Tayan wouldn't mind this because that is more would-be warriors falling into its mouth. People would notice the Tayan in a sparse desert pearls or not, so camoflauge doesn't matter, and the pearls would attract crows and children because they are shiny.

The Tayan simply swallows the sand and passes it through its digestive system. Several species of worms living in mudflats do this, like the lugworm.

Lugworm swallow sand and filter it for nutritious particles, but since sand itself is not digestible, it's excreted unchanged, creating distinctive forms. 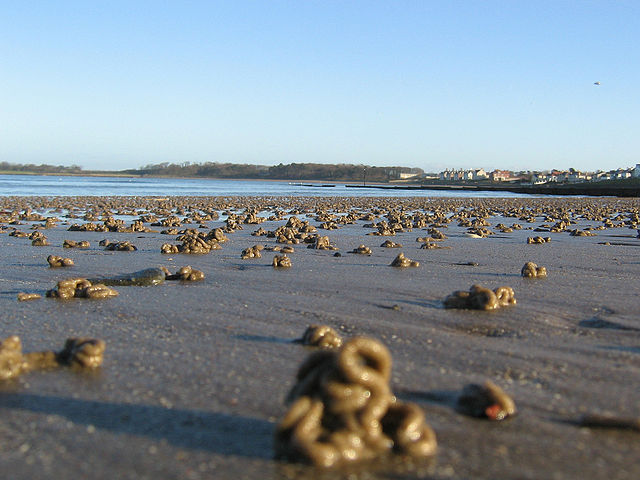 By excreting swallowed sand, the Tayan can incorporate it into its sand trap, increasing the height of the traps funnel without wasting energy for digging.

Both stomaches hold back big chunks for a long time but let small particles pass into the intestines, thereby quickly emptying of swallowed sand. Since the sand is drenched in saliva and/or stomach acid, it moves through the intestines as easily as any regular food.

If the Tayan closes its mouth while resting that will definitely help! think of it like a biological trap-door over the mouth opening, upon feeling footsteps above it, the trap-door suddenly opens and the Tayan feeds as normal. The fast jerking movement of the door is analogous to the pouncing of snakes or the snapping of venus fly traps.

This will stop sand falling in from sand-storms but some sand will still get in during digestion. That I advise you deal with the same way humans deal with sand getting in our digestive tracks! Sand is biologically inert so while indigesitble can ultimately be passed with little difficulty by whatever consumes it.

This is assuming that the Tayan has an, ahem, other end. (possibly going back up to meet the surface?)

You can design filters that let in big things but not small things.

Multi stomachs make sense, just not how you expect them.

"Traditional" wet mouths feel like a problem though. So something that acts like a big mesh bag as a first stage. Have it "breach" the sand, and let the excess come out, and blast the rest out, as it poisons the victim. That minimises the sand ingested. Then shut the sand exhaust orfices and pull the stomach in before transferring it to the "Wet" stomach for your long and painful digestion needs.

So have a "dry" stomach and "baleen" handle the sand, use the tentacles to pull in the victim and digest with minimal sand intake in the "wet" stomach.

Might even have an intermediary stage to clean the victim, maybe washing them in some mild and very painful stomach acid or neurotoxin that periodically gets flushed into the surroundings.

The digestive system has a filter.

Specifically, from the mouth downwards there is a steep slope to one side. The slope has little holes where sand falls through and out of the Tayan.

Prey doesn't fit through the holes and slides down the slope. If you want, you can use this to separate between the stomachs too. Another set of holes for small prey further down the slope makes that prey fall into the first stomach. Only what's too big for those holes goes into the second stomach at the end of the slope.

Makes for interesting plots, too. Trying to cut a hole into the first filter to hop out or closing the holes to make the Tayan suffocate from the sand that isn't filtered out anymore.

Bonus points: it's a mechanical solution, your Tayan is already wasting a lot of energy with those tentacles and keeping prey alive, it needs to save energy at some point. If it was engineered, that's basically a design choice.

My creature, which is heavily inspired by yours, has a similar problem and deals with it by turning itself into a glorified biological pit trap that uses the sand to help it hide in plain sight. I'm just going to quote a question relating to this creature.

Its mouth remains closed, sitting just below the surface and covered in sand until it senses a victim above it. At this point, the creature's mouth opens, and the sand falls into the creature's throat, along with any hapless victims that may have been on the sand (kinda like the 'death from below' attack used by a sandworm on a spice harvester in both the trailer of the latest Dune movie and the movie itself). Tentacles within the throat reach through the sand, grabbing all living things within a certain size range (by the way, humans of all ages and sizes fall within the alforementioned size range) and ensuring that anything stuck on, carried by, or attached to the grabbed victims (such as parasites, clumps of sand, or in the case of humans, clothing or equipment) is removed. Once this is done (it typically takes just under a minute), the creature vomits everything not grabbed by the tentacles up out of its mouth and high into the sky above it and then shuts its mouth. The falling sand then lands on top of the creature's closed mouth, and the trap resets. As an added bonus, anything of value also lands atop the mouth, serving as bait for more prey.

Your Tayan could do something similar, setting itself up as a pit trap that situates the tentacles inside its throat, where they grab prey before the Tayan chucks everything out of its throat, to ensure prey can't escape via being spewed out with the rest of the sand.

Not the answer you're looking for? Browse other questions tagged reality-check xenobiology .

-1
How could the Tayan keep its victims from moving?

10
What is a plausible reason why the creature keeps its victims alive in this stomach?
4
How to escape from a Tayan’s maw?
7
How can my Tayan creature excrete waste, whilst buried underground?
4
How to safely drop victims into the Tayan’s mouth?
22
An animal that is physically separated into multiple parts
10
Having a split lower jaw while maintaining a strong bite force
5
Square Cube Law and The Titan Whale
9
How to design a digestive system for filtering insects out of sand?