Essentially, I'm designing a solar system for form of alien life. For the sake of ease, the star is roughly similar to the Sun, and the habitable planet follows an orbit anywhere between Earth and Mars.

However, from what I've been able to research, it seems that a large amount of extrasolar planets discovered so far are Hot Jupiters. Whether or not this means that this kind of planet is actually common or simply the easiest to detect is debated, but regardless, I've decided to include a Hot Jupiter in my solar system. However, that's raised a question for me -

If a solar system contains a Hot Jupiter, what effect would it have on a nearby habitable planet?

Quick note - I have yet to determine how close to the star my Hot Jupiter orbits, if that helps in anyway.

Conventional wisdom says that terrestrial planets and hot Jupiters are not likely companions. These gas giants in close orbits aren't thought to form in situ, but rather to form further away from their stars and then migrate inwards. Two main mechanisms have been proposed:

It's clear that if hot Jupiters mainly migrate via scattering, the inner portion of a planetary system will be severely disrupted (see Mustill et al. 2015); any terrestrial planets would have to be much further out. However, it's possible that only the so-called warm Jupiters, which orbit 0.1 to 1.0 AU, use this method, while true hot Jupiters use type II migration to go even closer, according to Levison et al.

Whether gas disk migration would be just as problematic for terrestrial planets is up for debate. Some simulations (e.g. Fogg & Nelson 2008) imply that in such a scenario, material from the inner protoplanetary disk would be expelled into orbits outside the hot Jupiter's. Terrestrial planets could then form here, in a gentler region of the system.

The simulations by Fogg & Nelson indicate that volatiles from beyond the snow line would be mixed with the inner disk debris, leading to terrestrial planets with heavy elements and water. This seems to show some good prospects for habitability. Mandell et al. 2007 found that these planets would likely accrete icy planetesimals, leading to even more water; indeed, they could readily become worlds with oceans covering their entire surfaces. Some, in fact, could even end up in the habitable zone, with surface temperatures suitable for this water to stay liquid. 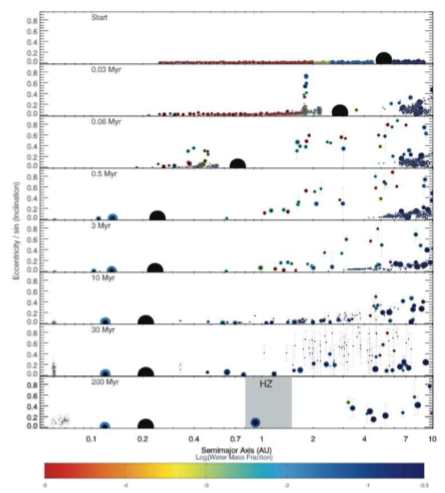 Fig. 2, Mandell et al. One of the authors' simulations. While most scattered protoplanets end up beyond the snow line, there's a chance for one or two to have stable orbits in the habitable zone.

Hot Jupiters often have their atmospheres ablated by the winds of their parent stars. This can result in atmosphere loss, forming a plume that trails behind the planet. My order-of-magnitude estimates indicate that this shouldn't be a problem for planets orbiting further out - and it certainly won't cause the ablation of their atmospheres, or some sort of mass transfer.

We do have a couple examples of systems with hot Jupiters and terrestrial planets coexisting. WASP-47 is an interesting case. It contains two planets with masses slightly above Jupiter's - one close in, and one further out. There are also two terrestrial planets: one inside the hot Jupiter, and one between the two giant planets. This is a setup similar to some of the results of Mandell et al. In simulations with two giant planets, this sort of result was not unlikely. One giant could stay where it was, while the other migrated inwards. However, the furthest giant planet has an unusually high eccentricity relative to the other bodies, and so a more complicated mechanism may be at work.

The effects would vary

Gravitationally, hot Jupiters are known for their very low density, but their overall mass can go from roughly a third that of Jupiter, to ten times as big. While their distance to the habitable zone (HZ) in a Sol-like star is large (over ~0.5AU), a planet with 11 Jupiter masses would cause strong gravitational disturbances even at that distance. Possibly strong enough to push a planet in said HZ into an eccentric orbit that dips outside of it.

Brightness-wise, a low density, massive hot Jupiter may be able to block a significant portion of the sun with every orbit, meaning that every ten days or less (by the definition of hot Jupiter) your planet would suffer large dips in sunlight which may strongly affect habitability.

Essentially, a small hot Jupiter would have little effect upon a planet in the HZ, while a large one may even make the planet non-habitable, regardless of orbit.

Not the answer you're looking for? Browse other questions tagged planets solar-system habitability .

5
Effect of Hot/Warm Jupiter atmosphere loss on Habitable Zone
4
Habitable planet in a multistar system
9
How do I design the solar transit of a hot Jupiter?
14
Are trojan planets possible? Are habitable trojan planets possible?
3
Can giant planets in the habitable zone have rocky moons?
13
What is the theoretical maximum number of habitable planets in one solar system?
2
The major effects on the habitability of exomoons orbiting this Brown Dwarf
8
Orange Suns and Blue Jupiters
8
Are Geologically Dead Planets Habitable?
6
What would happen on the surface of a terrestrial planet captured by a gas giant?