Scansoriopterygidae was a family of theropod dinosaurs that lived during the Jurassic, the most well-known member of which was Yi Qi. They are thought to have been arboreal insectivores, and convergently evolved bat-like wings. 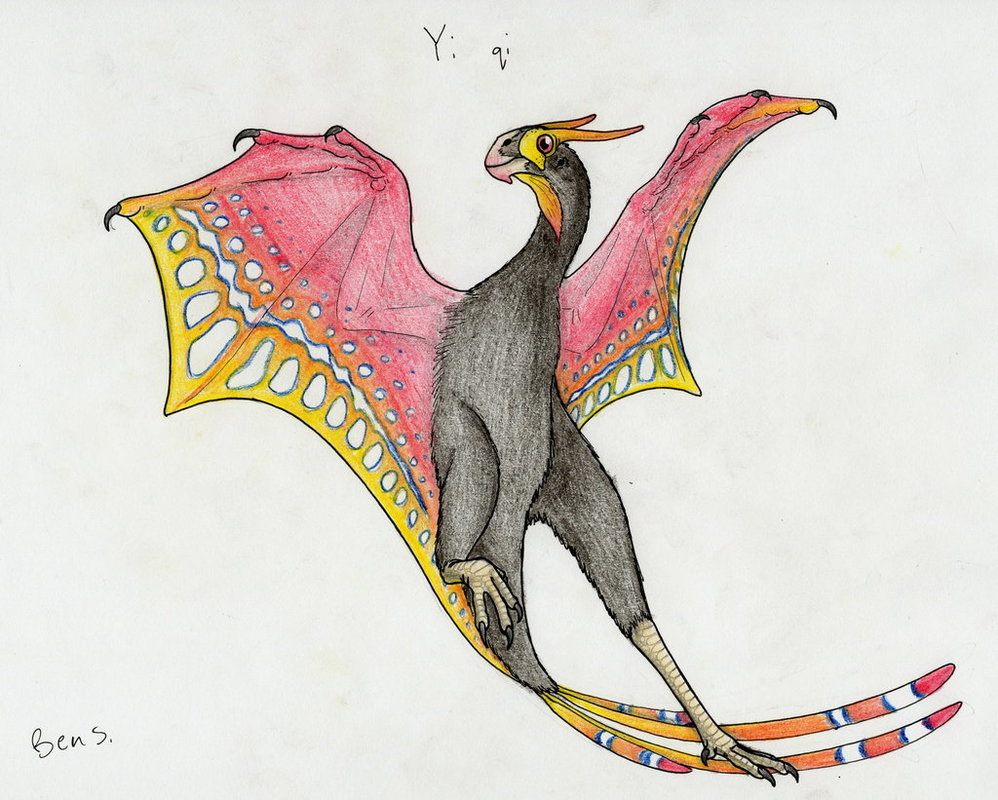 Paleontologists currently think that it may have been capable of very weak flapping, but was likely an exclusive glider. The Scansoriopterygids went extinct in the late Jurassic, about 156 mya, but had they continued to live through the Cretaceous, I'd say that they'd be at least potential K-Pg survivors.

In my project (See also these questions on cockatrices, hydras, griffins, giants, sea serpents and merfolk), the Earth is inhabited by many creatures from human mythology that are supposed to be as scientifically plausible as possible (Note that in the project, the biology is the primary focus, and the story comes second). One such animal I'd really like to include are dragons - or, rather, wyverns.

The question is: is the premise of large, flying theropods descended from Scansoriopterygids which survived into the Cretaceous and Cenozoic plausible? Let me explain a bit more about my wyverns:

One of the problems that may exist for this concept is that Scansoriopterygids were gliders - and, according to many people I've heard - "gliding animals can't evolve into flying ones". Is this correct? Can I achieve gliders evolving powered flight, without having them lose the ability to glide and then evolve flight? If Yi Qi really was capable of weak flaps, this problem could be overcome by enlarging the pectoral muscles.

Then, there is size. A lot of the time, it's hard to just scale up a small animal and end up with a biomechanically functional organism. So, before asking this question, I thought about why bats can't grow as big as birds or pterosaurs. The main ideas I came up with were:

Could these problems be overcome?

Lastly, there is the fact that they "haven't taken over the world". The bullet point was a bit vague, but I pretty much mean that I don't want them to be nearly as ubiquitous as mammals or birds. Ideally, there should be about 500 species or less, almost all of which will be small-ish, hawk-sized ones, with a dozen or two species that are very large.

If I haven't mentioned it in the list of bullet points, you don't need to address it in your answer - so the likes of fire-breathing, scales vs. feathers etc. can be left to me.

If you require more information, please say so, and do the same if you suggest it to be broad, off-topic or opinion-based.

Gliding animals have evolved into flying ones at least twice, anyone who says otherwise doesn't know what they are talking about. Birds did not evolve from gliders but they are likely the only ones. It is also the reason birds legs are not involved in flight, because they evolved from cursorial jumpers, both locomotions systems needed to be seperate.

Bat don't get as big because mammals are pretty crapily designed for large size, our breathing is in efficient and live birth works against us for fliers. Note bats are more maneuverable in flight (larger percentage of mass in the wings and curlable wings) than birds so the bat design is not all negatives.

Yi qi the Scansoriopterygidae is just bleeping weird, If you want dragon like wings it will be a great choice. the wing support prong is not preserved in Scansoriopteryx bit it does not have the greatest wrist preservation and there are some suspicious splinters of bone, since it is juvenile if that prong is ossified cartilage they might not be preserved. Note also the tail from Yi qi was not preserved so that is just artists fancy, the closest relative we have has a much longer tail.

However the two seperate locations systems will limit the size far more than it does in pterosaurs, unless you regress it to a more pterosaur like posture (quadrupedal). There is a reason the biggest flying birds are nowhere near the size of the biggest pterosaurs. Alternatively there is no reason you could not have earlier pterosaurs develop bat like wings instead of the monodigit ones they had.

Now to deal with your bullet points.

As for them not taking over, that is easy just isolate them mostly on a single continent for most of their history, this is where competition will work in your favor. It does not work as well with a flying animal but oceans are a great way to isolate groups of animals. maybe they evolved in Australia and only the largest of them have spread further. Keep in mind though a wingspan of 20M is almost twice the largest pterosaur.

Not the answer you're looking for? Browse other questions tagged evolution fauna mythical-creatures dragons dinosaurs .

8
Is petrifying vision plausible in an animal?
13
Hydras as parasitic-mating, polyandrous amphibians?
8
How can I explain the evolution of my giants?
9
How CAN a Wyvern be a Scansoriopterygid Dinosaur?
5
Could an intelligent race of seals craft tools effectively?
4
Anatomically Correct Cockatrice
10
How large could my sea serpents be?
8
Are my wing-walking griffins viable?
0
how reasonable is it for wyverns to evolve on earth?

14
How plausible would a fully aquatic bat be?
12
How to evolve a reptile into a wyvern, 100 million years in the future?
4
How could wyverns fight effectively if they can't carry stuff around?
9
How CAN a Wyvern be a Scansoriopterygid Dinosaur?
3
How could six-limbed dragons launch like vampire bats and giant pterosaurs?
8
Is my idea of Wyverns realistic?
4
What are the limits of leathery wings?
4
Could bats evolve to have beaks?
3
Flight drag and the superior limit size for hexapod dragons?