Is it possible for a naturally occuring star system to have 120 planets?

In my book series (link here), there is a star system at the northern edge of the galaxy called the Ryu system. I am planning for this star system to be huge, encompassing 120 planets.

The vast majority are too close to the star to be habitable, while all in the habitable zone except 2 (Ryu 97 and Ryu 108) are uninhabitable due to toxic atmospheres. The rest are too far from the star and thus too cold for habitation.

How large would the star have to be for this to be plausible as a naturally occuring system, and if this could not be made possible by changing the size of the star, how could I get this setup to work?

The vast majority are too close to the star to be habitable, while all in the habitable zone except 2 (Ryu 97 and Ryu 108) are uninhabitable due to toxic atmospheres. The rest are too far from the star and thus too cold for habitation.

Reality Check. It does not sound realistic. If I read it in a book, I would take it for allegory or fantasy.

Before I explain why that can't happen, I'll link to the wikipedia page for Circumstellar Habitable Zone (which will give you many ideas for habitable-fails) but the following graphic sums up an important concept. 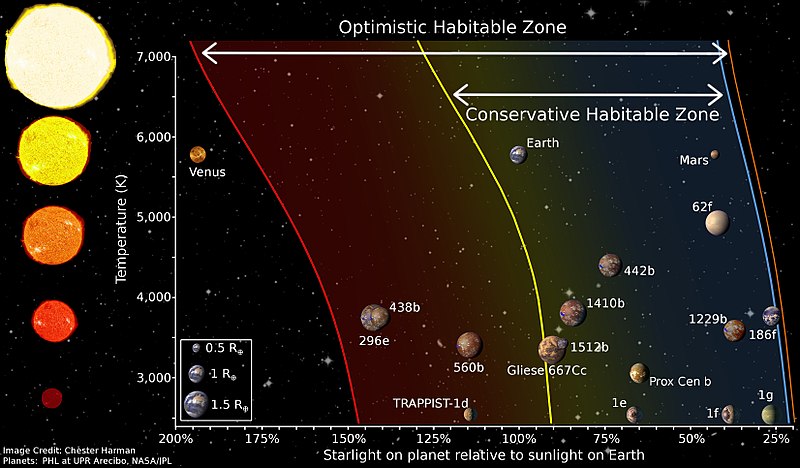 Notice how there is an "optimistic" zone and a "conservative" zone? In your case, the optomistic zone is bad because you have even less room to pack those 90 planets.

The habitable planets are either sharing a horseshoe orbit, or orbiting in close proximity but in opposite directions, or they will need to have a safe distance from each other (and all other planets) to both remain in the star's habitable zone.

But your real problem is that you have a lot of rocks hanging very close to your sun. To prevent them falling in, they must be counter-weighted with a Super-Jupiter that pulls them back out every time it orbits. The Super-Jupiter tugs these inner hot zone planets out of their death spiral, but not enough to escape orbit. They dive back towards the sun, only to be pulled out again when the Super-Jupiter passes overhead again.

The current best theory of how our solar system formed is called the Nice Model (after the city in France). It involves the 4 gas giants moving around and tossing other planets out of the system, until they eventually settle into resonate orbits. Jupiter is anchored by Saturn, Saturn by Uranus, Uranus by Neptune, and Neptune is anchored by the Oort Cloud and Kyper Belt. It's the same concept as the inner planets being pulled from their death spiral by just the right amount of tug, away from the sun.

So the thing I am most skeptical about is how you can have a Super Jupiter large enough to pull 90 planets from the jaws of death, and there's another Super-Jupiter anchoring that one, and so-on, but you still have 2 habitable planets in the zone between them. The Super-Jupiter would yank them out of orbit, or send them crashing into each other. If it is large enough to pull 90 hot zone planets out of the sun, it would easily knock 2 closer planets in the habitable zone out of the system.

My gut feeling says no, it's not possible.

Let's do a back of the envelop calculation. For the inner planets of the solar system, it looks like each planet is 1.5 to 1.8 times further from the Sun than the one before it.

That would span more than the visible Universe (about $10^{10}$ light years).

There is no problem designing a solar system where all the planets are uninhabitable for humans, or where none of the planets have advanced multi celled life forms, or intelligent natives, or any of the stuff that makes most science fiction planets interesting. You don't have to worry about the parameters since there are so many different ways for a planet to be dead and uninhabitable.

Having twelve planets beyond the habitable zone and too cold for life is perfectly plausible.

But having up to 96 planets closer to the star than the inner edge of the habitable zone is a bit of a problem.

Thus in our solar system, planets too hot to be habitable are outnumbered at least two to one by planets too cold to be habitable, and that makes sense, because nice and warm planets have to be close enough to the star, too hot planets have to be even closer, and planets that are too cold can orbit farther and father away from the star, each farther planet getting colder and colder and colder, out to some vast distance.

Possibly Ryu could be as luminous as Rigel, Beta Orionis, which is is about 1.0 to 1.5 times ten to the 5th power as luminous as the Sun. That is about 100,000 times to 150,000 times the luminosity of the Sun. Thus if an Earth like planet was about 316.227 to 387.298 times as far from Rigel as Earth is from the sun, it would receive about the same amount of radiation from Rigel as Earth gets from the Sun.

So how wide, proportionally is the Sun's habitable zone? As I said above, that is controversial and uncertain.

So, assuming that 325.00 AU from Rigel would be the equivalent of 1.00 AU from the Sun, the most pessimistic Rigelian habitable zone would stretch from 308.75 AUs to 328.25 AU, a difference of 19.5 AU. Uranus orbits the Sun at a distance of 19.22 AU, so in our solar system there are 7 planets orbiting the sun within less than 19.5 AU, as well as space for another planet in the asteroid belt.

It is not surprising that Jack Vance, in his famous Demon Princes series, put 26 habitable planets in the habitable zone of Rigel.

Thus the star Ryu should have remained on the main sequence stage of stellar evolution for at least 3,000,000,000 years. Unless the two habitable planets in the Ryu system originated in another star system and remained there for billions of years until super powerful aliens brought them to the Ryu system for some reason. Or unless the two habitable planets originally orbited a different star for billions of years and a very unusual close passage between that star and Ryu caused them to be captured by Ryu.

And the really, really annoying fact about astrophysics for science fiction writers is that more massive and luminous stars use up their nuclear fuel much more quickly and remain on the main sequence for a much shorter time.

Astronomers have discovered thousand of exoplanets around distant stars, and sometimes more than one planet in a solar system.

The narrowest difference between the orbits of two planets in the same system is between Kepler-70b and Kepler-70c. Kepler-70c orbits about 0.0016 AU farther out than Kepler-70B. That is about 240,000 kilometers, less than the distance from Earth to the Moon.

Another important factor is the relative spacing of the planetary orbits. The smallest ratio between the orbits of two consecutive planets is 11 percent. Kepler-36b and Kepler-36c have semi-major axis of 0.1153 AU and 0.1283 AU, a difference of 0.013 AU and 1.1127493 times the smaller orbit.

So 12 planets each spaced at 1.1127493 time the orbital radius of the previous one would end up with the outermost orbit 3.2386983 times as wide as the innermost orbit. That is too great a ratio for the optimistic habitable zone. But the really, really optimistic habitable zone that could be made by taking the innermost edge from one study and the outermost edge from a different study, would have a ratio of 26.3157, several times enough to contain a ratio of 3.2386983.

So possibly you might want to consider having a ring of 96 planets in a single orbit, orbiting closer to Ryu than the inner edge of the habitable zone, or possibly two such rings with a total of 96 planets.

Note that spacing the planets by the smallest known distance made them fit in well, with plenty of room to spare, even when the star was no more luminous than the Sun, but the 96 planets closer to Ryu than the inner edge of the habitable zone wouldn't fit even if the smallest known orbital ratio was used to space them.

If the planet orbits are spaced by the smallest known distance between planetary orbits, making the star more luminous will increase the space available and make it possible to fit in more planets.

But if the planets are spaced by the smallest known ratio between planetary orbits, making the star more luminous will not increase the relative width of the habitable zone or the too hot zone, and you will have to make many of the planets double planets, or put a lot of planets in a ring, or find some other highly unusual (but hopefully possible) arrangement, to fit them in.

Since multiple planets in star systems have only be discovered for a comparatively short time. it is possible and rather probable that planets that are spaced more closely than the current record, both by distance and by ratio of orbits, will be discovered.

Not a complete answer, but it certainly helps with clarifying the bleak state of things for your current proposal. As far as 120, I don't know, but if having a high number of planets is part of the storyline to paraphrase @JBH in the comments, at least in comparison to other systems, a fraction of 120 will likely suffice. Of known solar systems, the most populated one has nine planets, placing our own high on the list. That and the fact that the confirmed mass of the lightest exoplanet is about 2 Lunas lets me have faith that about half of your original number is somewhat feasible.

But, I've gone to your website. Since your stories turn humans into anthropomorphic animals via a curse from "The Gods" and they migrate to another galaxy through portals after radioactively sterilizing Earth in a global nuclear war, I don't think science has a right to quench the diversity of your imagination.

Not the answer you're looking for? Browse other questions tagged science-based reality-check planets space solar-system or ask your own question.

22
Can a gas giant have its own habitable zone?
11
Is there a planetary setup with extremely long tide cycles?
24
Equatorial icecaps and polar jungles a fantasy or reality?
5
Can this planetary system remain stable?
6
Please help me calculate acceptable planet sizes & eclipse shadows cast by my binary planet system
8
How can I find out the length of seasons and solar year on this planet?
9
Are Trojan Planets Possible? Are Habitable Trojan Planets Possible?
3
How many planets should I have in my planetary system?
5
Could Ice Age vikings practice large-scale domestication?
2
Is it possible to make a stable planetary system like this, and what would the orbits have to be?