How would a life form conform their anatomy to fit whatever they wear?

In the sci-fi setting that I've had on the backburner for a while now, there is a species known as the Azmarans. They are a very socially adept species, between them having a rather communicative psychology to their unique ability to conform to whatever shape they might need in dealing with another species.

How they do this is through the use of artificial, inorganic exoskeletons, which are designed based on whatever bodily arrangement they so desire. They can also change their exoskeletons like a hermit crab would change their shell once they've grown too large for it. But for the Azmarans, this is more to achieve certain physical characteristics for social or practical benefit. For example, if they wanted to deal with a dog, they would make a dog-shaped exoskeleton, meanwhile if they wanted to deal with a human, then they would merely remove themselves from the dog exoskeleton and reinsert themselves into a human-shaped exoskeleton.

The way I'm imagining it is that their anatomy and the arrangements of their internal organs shifts and changes so that they can fit into whatever exoskeleton they want to. They have no mouths, as their diet consists of large amounts of bacteria and other microbial lifeforms, they are very sensitive to sound when naked, due to the atmosphere of their evolutionary homeworld having been rather thin, and they have a set of eyes developed for ultraviolet light, though they can perceive other wavelengths through the aid of their technology--which is often integrated into their exoskeleton's visors.

But something I can't quite wrap my head around is; how do they change their anatomy so that they can conform to the shape of their exoskeleton? They have no endoskeleton, that's for sure, and I'm wanting to make them a single organism rather than a symbiotic colony of smaller lifeforms like the Lekgolo from Halo, but beyond that I'm unable to figure it out. How might such a species develop their biology in such a way that their organs, veins, arteries, and so on would shift and reshape for the shape of their exoskeleton?

[EDIT] This is distinct from the other question because the Azmarans are supposed to be able to take on any selection of limb numbers and structures (10 limbs, 100, 1,000, etc.) and they are generally rather formless without an exoskeleton; resembling more of a mass of living flesh with eyes than a true animal when they don't have an exoskeleton. The idea of the Azmarans being many smaller intelligent lifeforms is tempting, but for your information, my brother had already introduced me to the Portuguese Man O' War, which is more of a colony of unicellular organisms functioning as one larger organism. This, however, is not what I'm looking for, as they are supposed to be distinct multicellular organisms. Not to menton that they are also supposed to be able to take the form of only what the exoskeleton is. That they use metamorphosis for this is out of the question, as they are expected to change their shape and physique depending on the shape of their exoskeleton.

I've also seen the comments regarding their size and whether I'm looking for that to change as well. I'm not. I'm wanting them to be stuck to their own regular mass and volume in what is possible, so if they were to take a mouse-type exoskeleton, then they would look like a massive mouse in their silhouette. Though the use of silhouettes that an organism would be comfortable with that are other than the organism's own is certainly a good idea, such as the dog issue; although simply being a large dog would typically suffice, they'd just as likely take a humanoid appearance, as dogs had been bred and raised to love humans and do what their human master says. In addition, I'm certain that humans wouldn't mind interacting with a humanoid of larger or smaller size, as the Azmarans would have different sizes depending on factours and variables similar to how size works for humans; age, nutrition, health, genetics, and the environment.

Your aliens are amoeboid, without fixed shape.

Amoebas move by exerting leverage against one area and pushing out another via fibers extending through their protoplasm.

It has a cytoskeleton, a network of fibers stretched across the cell which it can shorten and expand (by adding or subtracting actin monomers which build them) in a coordinated manner to more-less arbitrary change shape.

Your aliens do likewise. They will move exoskeletal appendages via pushing protoplasm down into the appendage (or pulling it out) and increasing / decreasing pressure relative to the rest of the exoskeleton.

Sidenote - your adept aliens might know to avoid the "uncanny valley", in which something which is like a human but not close enough gives off super weird vibes. It would be cool if the shape they chose for a human was not humanlike at all - maybe even customized for individuals. One human would get a Shmoolike snowman. One would get something like a walking tree stump. One would get something like a hedgehog. Dogs would get fire hydrants. Each entity would feel comfortable with the manifestation the Azmaran chose, because they are that good.

I tend to approach my fictional species from an evolutionary perspective, which isn't a necessity in science fiction due to uplifting, self-genetic modification, and artificial sapients. That being said, I'm still going to try an evolutionary approach for your Azmarans.

Okay, so the first thing about Azmarans is they are clearly not claustrophobic. They have no qualms about spending a good majority of their lives in these stiff suits, which is almost like humans being okay with wearing deep-sea-diving suits all the time. That makes me think that they evolved to appreciate tight spaces, likely to avoid predators or secure food.

With that in mind, I totally agree with Clay Deitas that these creatures would have a lot in common with an earth cephalopod, specifically the octopus and squid. In addition to very malleable anatomy (I'm imaging a long body with several tentacles with smaller branching tentacles on them, severing the same function as fingers, but that's just me), the Azmarans will have multiple hearts and a decentralized nervous system. This would not only allow for a unreal amount of flexibility, but gives them access to more far more brainpower than most animals.

With that kind of anatomy in mind, you have a species that is great at hiding and tool use, but has very few defensive options. For most of their prehistory, they would survive by planning out well defended settlements, making traps, and forming groups for hunting more dangerous animals. The beginning of some "suits" could be seen here, with some Azmarans making suits of wood, bone, or stiff hide to give them more leverage and protection in a fight. After a few technological revolutions (agricultural, metallurgy, mathematics, scientific method, warp drives, etc.), I can totally imagine this mindset leading to the diplomatic exoskeletons you're talking about.

Here's some miscellaneous brain-drizzling regarding this idea:

Sooo, yeah. A before the Azmarans were talking to humans while wearing a human suit, they had a long history of being squid(-like organisms) kicking around in these: 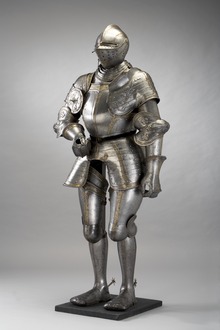 If your species has evolved in such a way that one organ or another can do any job that it needs to do, as well as a form of proprioception which allows the individual to know where its internal organs are and re-purpose them to different functions. This way the organs don't have to go very far at all, they just change what they are going to do.

If they are just eating bacteria, they can be blobs. They don't need any large organs anyway, just nuclei, ribosomes, and some other organelles. The problem won't be shrinking, they can just dump a bunch of cells off of themselves (or exocytosize some of their cytoplasm if they are one big cell), the problem will be scaling back up in size, for which they will need some stored cells/cytoplasm they can use, which might be contained in canisters in the suits.

Not the answer you're looking for? Browse other questions tagged science-fiction aliens species .

15
Reasons why an advanced alien species might uplift the human species
34
How are there so many species on the space station 'A long way from anywhere V'?
4
Plausible homeworld for an insectoid-ish alien species?
5
How do the aliens maintain their transformations, even after they die?
6
Defense procedures in case of encountering robotic alien locusts
5
How to plausibly justify a species growing mineral-based protrusions that resemble horns or spikes?
6
metal/alloy based lifeforms? how would they function?