Could an intelligent race of seals craft tools effectively?

A while ago, I asked a bunch of questions about my alternate Earth timeline, which contains plausible fantasy creatures. One of the concepts I've devised more recently is a solution for mermaids (Most people make them aquatic primates) - seals.

Specifically, descendants of phocid seals. My premise is that mermaids are an intelligent race of derived seals, which - preferrably - have at least basic technology. I'd like them to use their flippers to make tools, so, the question is as follows:

Is there any way that the flippers of seals could evolve to be able to manipulate, make tools and use tools? If you're wondering what kind of tools I'm thinking of, think Paleolithic-level.

I'm not up on seal anatomy; but I think the main thing to evolve is some sort of grip on, for example, a stick or spear.

That does NOT require an opposable thumb. Our opposable thumb gives our grip strength, but I have known a man that lost his right thumb in an accident (stuck it into an exposed boat propeller, had it surgically amputated). Using four fingers he could still grip and hold things and write with a pen: He held the top part between his index and middle finger, and near the tip of the pen between his middle and ring finger. So the middle finger wrapped over the pen.

Just gripping a stick, one can break off branches to form a shaft, and rub it against rocks to sand one end down into a sharp point. Likewise, one can form thicker shafts used as levers, and sand flattened ends to use as shovels. Or, as paleo people seem to have done, attach handles to the shoulder blades of animals to make them shovels.

A grip likewise allows the winding of cordage, the application of natural tars or pitch. And you don't need an opposable thumb to hold a rock and knock chips off it, by striking it against a larger rock on the ground. It is possible that using their lips, seals could tie knots as well. And don't forget, if the seal can grip a handle, it can have fine-pointed and sharp tools for details with large handles on them; such as drills, or picks. In that way they can also finely carve bone to make tools.

It is an extremely anthropocentric and misguided view to think opposable thumbs are the be-all and end-all of tool production; it only shows a lack of imagination. Even birds make tools with just their beak, and sometimes feet (which are adapted to grip branches (the precursor of sticks)).

Intelligence is the key, if the seals can grip a stick, and have human levels of imagination and problem solving, I'd expect them to develop a wide repertoire of tools, furniture and shelters. I'd expect them o master fire. It won't look like a tool for a human hand, of course. Those are just an accident of our own development, we made stuff easy for us to use. They will make stuff easy for them to use, using one flipper, two flippers, and perhaps their lips, teeth and jaw. Heck, we humans still use our teeth to get a grip on some things our fingers cannot grab.

If they stay aquatic animals, they cannot lose the steering ability connected to their flippers.

Therefore, if you want to add advanced manipulation abilities, you probably need to add an inter-digital membrane, which allows proper interaction with the water. 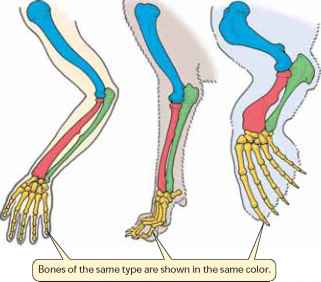 Since the anatomy of the flippers is not that different from the hand of a human, it "just" requires switching of some genes at the right moment during the embryo development. (source of the image)

It seems that whatever changes you make to the front limbs to alter their purpose, the rear limbs evolve accordingly to compensate. For instance, front limbs that resemble human arms are less efficient than flippers. This means the "seal" or mermaid cannot use them in the same way. It will extend its front arms forward in order to streamline the body. The rear limbs, on the other hand, will assume the shape of a dolphin's tail and the back muscles will provide a stronger propulsion. The back muscles undulate the spine. They create a "wavy" motion which sways the tail up and down in the same way a dolphin does.

Dolphin kick for swimmers is the same https://m.wikihow.com/Dolphin-Kick

that is plausible. Mermaids might have been inspired by marine mammals. Dugong literally means "lady of the sea", it has dolphin-style tail, and has finger bones that only get rigid with age: https://en.wikipedia.org/wiki/Dugong

Seals are a better starting since they are predators, and hunting requires more brainpower than grazing. And otters (another kind of aquatic carnivorous mammal) are known to use rocks to break seashells.

You are right that they could not advance beyond stone-age tools, unless they come on land to make fire and work metals. But they still have rocks, shells, corals, bones to be used as edges. Seaweed or animal materials for binding. Driftwood or Corals for handles.

Besides evolving fingers (with webbing between them), they will also need to get their hands long enough to hold an small object with both hands (to work on it, or to use a tool on it).

You cannot swing weapons or tools underwater, so no axes. And no bows. For hunting, they could make spears that they will ram into prey. For close combat, probably short knives.

Not the answer you're looking for? Browse other questions tagged creature-design evolution fauna fantasy-races merfolk or ask your own question.

15
What could make an insect race intelligent?
4
How a flying intelligent race communicate?
3
Evolving an intelligent avian race with a human-like appearance
9
How could chocolate bunnies evolve?
7
Could An Intelligent Werewolf Talk?
8
Could a Dinosaur make tools with only three fingers?
7
Could an intelligent worm-like race invent and build computers?
6
Alternate paths to orthostasis
39
How could intelligent animals defend against humans?
12
How might a highly intelligent aquatic species (mermaids) communicate underwater?