How would an attacking army take a port city by surprise on land in medieval times?

Imagine a busy port city with hundreds of ships in a medieval setting without gun power. The city is not heavily walled, and is located on a remote corner of the world, away from the jurisdiction and protection of the Empire. The city is a bit smaller than Amsterdam and it's northern, western and eastern sides are surrounded by a sea. A stretch of land to it's south connects it to the rest of the continent (think of the heel on the boot of Italy). The city has a small barracks and city guards with a small naval fleet to protect against pirates. Lets say the amount of guards and soldiers is 500 (is this number too low?)

Is it believable, or possible, for an enemy army to successful conduct a sneak attack on land to the city without warning? What would the enemy force need to execute in order to interfere with the personnel of the city from relaying an impending attack? The land leading to this city is mostly green with some hills, but no mountains. This army does not have access to ships of their own, and travel on horseback. They total somewhere between 500-1000 men (is this too little or too many?).

If relevant, the attacking army has magic which can manipulate minds, but the access to this kind of magic is limited.

I do think we need more details regarding the geography of the land around the port city, but I will do my best with generalized cases.

Here I assume the enemy army wants to attack and take the city quickly, breaching the walls/gates before the city guard can mobilize effectively. To do this they will likely need some aid from geography and maybe weather. Given enough cover, either by trees, hills, moon-less night, the army might be able to get close enough such that they can close in on the city quickly on horseback and overwhelm the guards. Maybe a fog rolls in at night time, or a whiteout caused by heavy snowfall in the winter, that might provide cover, even if there is no traditional cover. Perhaps even then, the army isn't able to get close enough to surprise the guards. In that case a better strategy would be to have a smaller strike force sneak in further ahead, able to seize the gates and/or distract the guards long enough for the main force to reach the city. Even better, the strike force has already infiltrated, disguised as refugees, travelers, or via secret abandoned/forgotten sewage tunnels. A plausible scenario would be, starting a fire or riot in one part of the city, that will distract the guards, then capturing a gatehouse. They then need to just hold on to the gatehouse long enough for the rest of the army to come riding in.

Cutting Off The City

Without ships, it'd be tough to blockade the port city, but imagine the port city is on a peninsula extending into a protected bay. The enemy could then seize control of the bay's entrance/exit, thus preventing the port city from sending ships for aid, as well as send the main force to block the only land passage, effectively isolating the port city. They can then initiate a traditional siege of the city.

Think 'flashmob'. Build up a force over time. Claim a distant war is causing refugees in small groups to arrive in the town. Attack at once, first securing the means of communication.

Use the pirates as diversion / decoy

Since you overpower the port city by numbers and their strength is with naval combat, you can feed their ego by giving them what they want: the advantage they think they have.

Hopefully you have some kind of contact with the pirates because without them, the plan would fail.

EDIT: The persuasion isn't necessarily conducted at sea. Preferably when the pirates dock to some remote town to take a break. The army will not need ships to do this.

TLDR: Use pirates, split their forces 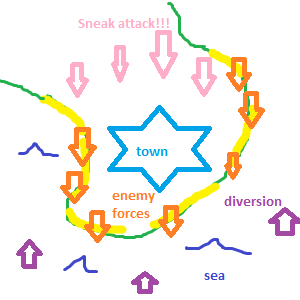 I think we need to do some thinking about what it means to take the city "by surprise". In those days armies didn't have radio or telegraph, and they wouldn't be in a constant state of readiness. So you could be fighting with a few guards (who wouldn't be surprised) but if you prevent them from getting a message to HQ or you prevent HQ from alerting the garrison, you're still taking the city by surprise. In that sense a surprise attack is really a "head of the snake" attack -- you're trying to force the general or the prince to surrender before he can mobilize his defenders.

Given that, the kind of a ruse that you might see in a silly movie could actually work. Think of how Westley, Inigo, and Fezzik got into Prince Humperdink's castle in The Princess Bride, or how Mel Gibson's William Wallace in Braveheart tricks the English garrison into opening their gates (by wearing uniforms taken from a captured patrol). Realize that in the days before gunpowder, each fight is man-to-man. A small group of infiltrators can fight a small group of guards, take the gate, and let their comrades in. Arrive at a time when you're not expected, for example, in the winter. Before the American Revolution, armies generally didn't fight in winter but sheltered in place. Washington was able to win the vital battle of Trenton by attacking at dawn on December 26th, when the enemy simply had no expectation of possible attack and hence were not in a state of preparedness. (This was of course a desperate risk by Washington, whose troops might not have survived if they had to retreat, so that's the trade-off.)

Once within the city walls, your army's task is to get to the enemy headquarters and capture the prince or the general, forcing him to surrender. Now, if your attacking force is really small, eventually the lower-ranking commanders of the garrison will realize that you're bluffing and may re-take the city. So you have to act fast to consolidate your win, perhaps by demanding they disarm, keeping them separated, turning them to your side, getting the church to officially recognize your right to rule, or bringing in reinforcements.

Not the answer you're looking for? Browse other questions tagged magic medieval military .

22
In a world of magic, why would cities still find high walls useful?
10
How can I encourage storming a castle to be more practical/safer/better rather than slowly sieging it down?
17
How would a city with high defences fare against airborne creatures?
7
"Peace through superior firepower" Why is it so effective and how to employ it in medieval fantasy times without the direct use of magic?
3
I need a huge castle that can hold of vast numbers off invaders, there is magic, medieval tech
1
How would a medieval army conquer a treetop city?
12
How might my sea dwelling civilization defend against land-dwellers?
6
How Many Soldiers are Needed to Patrol/Defend a Medieval Wall?