What would cause termites to be the dominant herbivores on a savanna?

I am building a world where the flora and fauna is based on that of Gondwana, the lost supercontinent that consisted of South America, Africa, Madagascar, India, Australia and Antarctica. One of the key biomes of this continent, linking all the other regions together, is a vast savanna stretching across the continent in the tropical and sub-tropical regions.

The wildlife of this continent is based on those creatures that evolved after the fall of the dinosaurs, but only on the southern continents. Many of the most common land mammals that we know of today evolved in the north (Laurasia, at the time) so the only mammals on the continent are prototheres (egg-layers), marsupials (opposum and kangaroo and more), xenarths (sloths and anteaters), and afrotheres (elephants, elephant shrews, hyrax, and aardvark).

If you look at those animals, you will see preponderance of insect eaters, such as aardvark, armadillo, anteaters, echidna and more. So, this sort of mammal ecosystem is best justified by a dominance of termites as the primary herbivores. 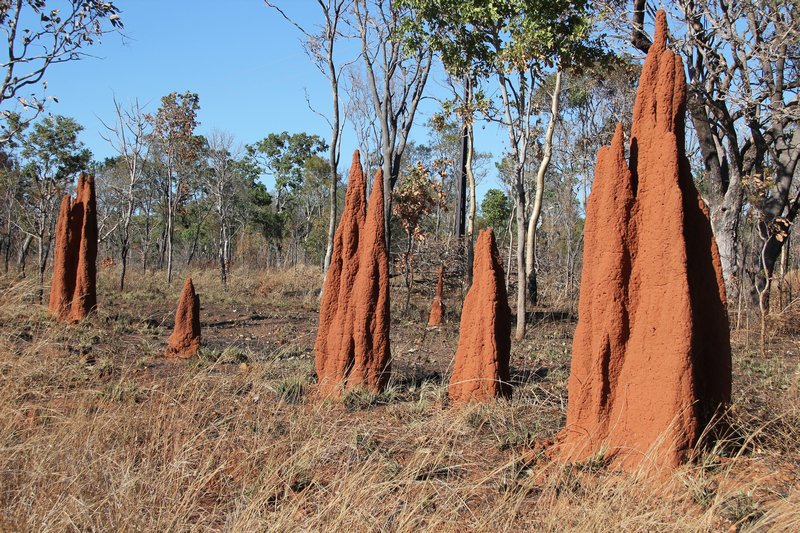 What changes, if any, do I need to make to a world to justify termites being the primary herbivores on a semi-open savanna?

Make grass a bad source of nutrients. It's not the competition from termites that causes grazing herbivores to never evolve, it's their lack of a suited food source.

Grazing animals rely on grass as a fast regrowing source of nutrients. In turn, they drop their manure on the plains, fertilizing the soil for the next generation of grass. If this cycle is broken (or doesn't exist to begin with), there's much less fresh grass than one would expect and bush fires may regularily destroy what's left.

Grass blades have sharp edges, occasionally causing little cuts if you draw them through your fingers. The sharpness is caused by little crystals lined up on the very edge of the leaf / blade. In addition, the flat of a grass blade is covered with little hairs that act like barbs. You can draw a blade through your fungers in one direction, but not in the other.

If you eat grass, you have to cope with these defence mechanisms. These could have caused herbivores to specialize on "less defended" food like bushes or roots, where thorns can be evaded.

Another consideration is the water source of plants. Grass cannot reach its roots as deep as bushes or trees, so it depends on regular rain. On a continent like Pangea without major moutains or diversity in biomes, how often does it rain? There might be one rather short rain season a year (if at all) like in the african savanna. Gigantic herds of grazing herbivores have to literally cross the african continent twice a year to find sufficient fresh grass to survive. Pangea might be too big for such migrations, killing grazing species on the continent alltogether.

Termites, on the other hand, are detritivores, consuming dead plants at any level of decomposition (according to Wikipedia). Different species have specialized on different plant matter, including wood, faeces, humus, grass, leaves and roots. Some even practice fungiculture (they grow their own fungus). Wikipedia further states: "It is assumed that more than 90 percent of dry wood in the semiarid savannah ecosystems of Africa and Asia are reprocessed by these termites."

If you massively increased the use that grass makes of silica, to the point where grass leaves are made primarily of silica rather than cellulose, the leaves become inedible leaving too little nutritional value per unit area to support large herbivores. Termites, ants, and other insect herbivores can continue to harvest the stems and roots of these glass-leaf grasses as cellulose feedstock for their fungal gardens but mammals can't get a good meal.

Win the multi-million year-long war against the Ants.

The dominant animal species, by weight, in almost every ecosystem on Earth are ants, which are the main predators of termites.

Given that scientists estimate that there are 1000 pounds of termites for every one living person on Earth, I'm going to assume that they are the dominant herbivore in any place where ants account for the majority of the terrestrial bio mass (nominally, 15-20%; in the tropics: 25% or more).

Ants and termites have been at war for millions of years. Ants communicate by the use of pheromones, so if you trick their soldiers into thinking it's their job to protect you, by say: smelling like ant eggs, not only have you essentially defeated your greatest advisory, but depending on the type of ant and the level of their now symbiotic parasitic relationship, e.g., leaf cutters, you also have slaves bringing you food if you can convince them to live at your house.

There are only trees. 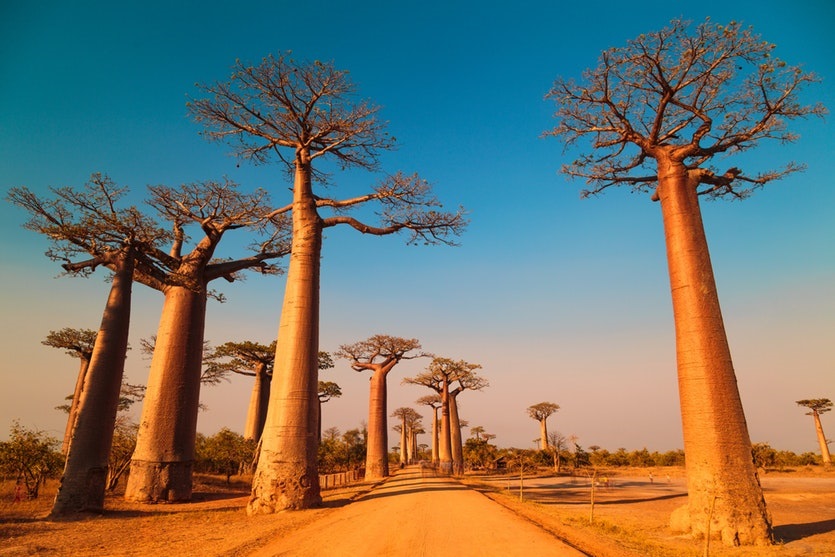 Grazers need grass. Browsers need browse. In this world it is too dry for that. There are only trees - big ones that can reach the water deep underground. Wood is the only readily available vegetable matter. Termites are the only animals that can subsist on wood.

Perhaps a disease would be a good way of doing this. If you only had a couple of grazing mammal species to begin with, they could infect each other, or through the water.

Some bison equivalent to black plague or ebola, that would drive the population down to below the threshold for genetic variety.

I think that species appear very gradually, and disappear suddenly. Species appear from similar previous species. In this case, nothing similar is left, and the termites have taken over the ecological niche of eating plant and being food for predators. It's similar to the way Madagascar has lemurs in the niche that monkeys fill elsewhere. Monkeys never reappeared there.

Make your grass analogs toxic to mammals but not to insect life; termites in particular use Naphthalene as a repellent to protect their nests from predation. If the grasses themselves were high in a toxin that the insects harvesting them were immune to, or better yet had a use for, then they, and possibly a few specialised grazers, could exploit the grasslands. Doubly so if they preprocessed the material, stripping the toxins out for defensive use and feeding the purified cellulose to fungi as a food source. Leaf cutter ants and a number of termite species use a "fungus garden" to process leaf cellulose while other termites carry gut bacteria that do the same job. Mammals trying to eat those same high naphthalene grasses would be poisoning themselves with every mouthful.

The gut fauna allowing for cellulose digestion in a Ruminant gut never developed. The only microorganism that can digest the cellulose are the flagellates that live in the termite gut. This way they are the only species that can get any gain from cellulose.

The Savanna is subject to frequent fires, the trees are sturdy enough to survive, but the grasses take a few months to a year to regrow. Termite mounds are relatively immune to the fires, but grazing animals can't survive the frequent lack of fodder.

Not the answer you're looking for? Browse other questions tagged reality-check environment fauna or ask your own question.

6
Why would smaller be better for anteaters?
0
How can I predict what the evolution of ants tends towards?