How would a century of disuse affect this structure?

In my story, an ancient building has been abandoned for a whole century without any care or use from the inhabitants around. They refrain from approaching it because they believe it is cursed, which is why it hasn't been scavenged for resources.

The building is located near the sea on top of a hill, around 20 meters above sea level and 100 meters away from the coast. It doesn't get flooded but there is only grass surrounding it, nothing that would stop wind. The winters are mild, and the summers quite hot (mediterranean weather, I imagine it as north-west of greece in terms of temperature)

The structure describes a large circle, whose floor is 4 meters (around 13 feet) under ground level, it has no roof, no windows and does not go above ground level (consider it as a well). It has a 40 meters diameter (~130 feet), the wall is entirely covered in stone held by mortar, while the floor is a mix of stone and large metallic shapes incrustations. Those shapes are made of copper. There is one stairway large enough for 4 men to walk side-by side, made of the same stones+mortar. It is not very steep and protuberates from the circle by a few meters. It connects to a dirt path.

After a whole century, exposed to wind, rain, what would this building look like?

The biggest unknown factor here is what the quality of the stone and mortar is. Also, since you mentioned it never floods but is basically a big hole in the ground, there must be a drainage system which has not been clogged for a hundred years. I find this fact very hard to believe.

Let's start with the most straight forward piece first, the copper inlays. These will undergo considerable corrosion due to the sea spray which is inevitably available given your location. Here is a paper to describe the damage salty water sprayed on copper can take. Since you exclude the possibility of fresh water filling your building thereby protecting your copper insets, your copper would be heavily corroded (how much depends on a huge number of factors).

Secondly, a hundred years of debris (dead plants, animals, insects, etc) blowing detritus of all manner in to building will create quite a pit of nasty. Presumably the rain is washing this away and then draining somewhere without being clogged? This would be difficult without some rather large outlet holes in your floor (and it must be graded to allow the flow of water).

On to the stones/mortar. If the building is limestone, it will be heavily eroded. If it is granite with modern (even Roman) quality hydraulic cement, there would be minimal erosion. Again, your ebb and flow of water going in to the building and then exiting is causing you more erosion here than if the building was filled with water. Also, any plant life which gains hold (depends on your construction) could cause mechanical destruction of the stones/mortar, allowing even more water in, which creates a cycle of damage.

If you consider allowing it to flood as a plot device, it would be believable for the building to be filled with rain water (mostly non-salt water) and the dead organics have caused a blockage in the drainage system. The intrepid explorer who first visits it could clear the debris and allow the structure to drain, exposing quite possibly near-intact copper insets. After some cleaning of the rotten organic material (which would also include a layer of sludge on the bottom), it wouldn't be hard to believe that the structure could be mostly intact.

It could last a very long time. 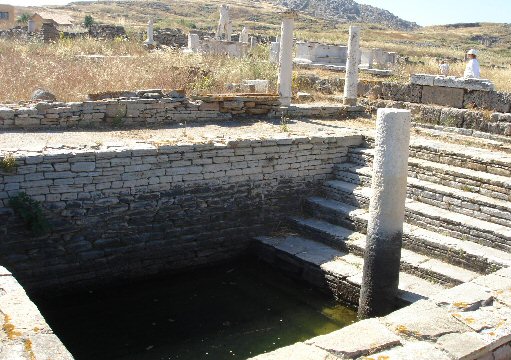 Delos is a Greek island, so a climate similar to or a little warmer than what you propose. This cistern is well over 1000 years old.

I think the trick will be water - fresh water. A hill over the ocean is a good place to find a spring because erosion cuts through the various sedimentary layers.

The spring keeps water in the bottom of your structure. The level will vary according to rainfall in the hills. The fresh water will keep the copper on the floor from oxidizing in the salt spray. The cistern is a little porous and will slowly drain if the spring slows down, and this will tend to carry windblown particulate debris away. The water level changes (as you can see in the image). Your "well" might be dry at some times of the year, if that helps your story.

If there is a low wall surrounding the edge that will deflect larger things like blown weeds; the Delos site has a low wall which also keeps drunk people from falling in. The hilltop site means nothing is uphill that might roll down and in. Copper is toxic to plants, so standing fresh water containing copper ions from your floor inlays will discourage plant growth.

Storms would hit your site, as is the case on Delos. The cistern is hunkered down below ground level and so protected, and has done a lot better over the centuries than the surrounding above ground structures.

Wind and rain will have easy access to your structure.

Wind will blow dust and solid objects into it, including seeds. Rain will make the structure a swimming pool of mud, either wet or dry according to the season.

The seeds carried by the wind will have an easy growth, shielded by the winds. Grass and other weeds will grow in the mortar, breaking it, allowing an even more efficient trapping of solid particles. Since the building is located in Mediterranean climate, it is likely that some bird will poop some seeds there, too.

If these seeds happen to be from fig or capper, the structure is doomed: 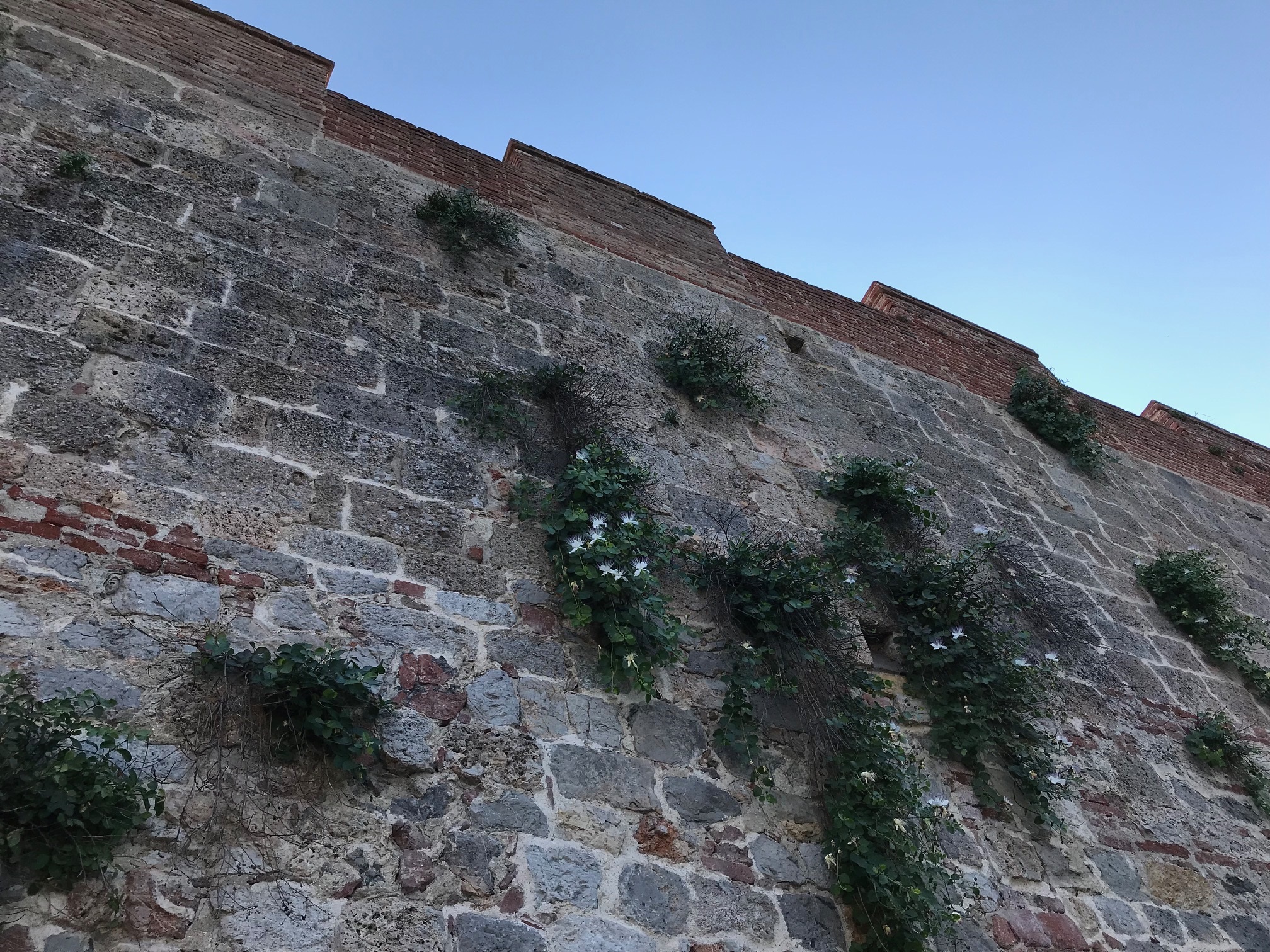 the roots of those plants are not afraid of walls, and can grow into them.

After 100 years most of the wall would be collapsed and filled with vegetation, the hole filled with dust carried from the wind and other biological remains.

Well, as AlexP said in the comment, your well would be half-buried under the rubble from the walls that cave in, and filled with plants and small bushes. But seeing its located just 100 meter from the coast, I think the most likely thing to happen is this: https://en.wikipedia.org/wiki/Ruins_of_the_church_in_Trz%C4%99sacz

It took a little bit longer than a hundred years for the church to disintegrate, but then again it was a bit further away from the sea. In your case, I would think that there might be something like half of the well left (and it won't be a well anymore), if anything - but that's up to you, as it is you that's writing the story.

In these mild winters, does it occasionally freeze? If so, depending on material, weathering can go a lot faster, especially when combined with a lot of rain. Concrete and mortar can act like a sponge, soaking up water, which expands when it freezes and lead to cracks in the material. Even a little night frost can cause a little pointing to come off, exposing just a little more surface for next year's night frost and so forth and so on. Over time the process can turn the entire structure to dust, again depended on the materials used.

Without maintenance, this wall would probably be a pile of rubble in a 100 years.

Not the answer you're looking for? Browse other questions tagged time materials or ask your own question.

15
How would common time-travel affect a language?
3
How do you capture this magical critter?
12
How to make this base-10 metric time concept work
2
Glass in Concrete?
2
How to affect history in a positive manner and reduce negative 'butterfly effects'?
3
Smaller Planet But Similar Time Structure
3
Mechanics and structure for an artificial giant creature?