If Earth's Core had ALL Of the Heavy Metals

Back home, Earth had gone through an impact-coalesce cycle only once. Since then, its core has been 84% iron, 6% nickel and the rest being labeled by The Encyclopedia of Earth: A Complete Visual Guide as "Other".

In this alternate scenario, Earth had gone through multiple impact-coalesce cycles over a course of 600 million years. As a result, iron still makes up 84% of the core, but the remaining 16% has the greatest concentrations of the planet's heavy metals, all of them. (List of heavy metals in this link.)

Not much (but see below). Here's why:

Let's start with some background

The core–mantle differentiation event was the melting event which caused separation of the rocky mantle and the metallic core. It separated earth into two phases (in the chemical sense):

What are the "metal" and "rock" made of?

The metal is mostly metallic iron and nickel, it is possible there are other lighter elements in there, but they are probably negligible and do not exert control on the chemistry. The rock are silicates: Basically magnesium, calcium, aluminium, iron, bonded to chains of silicon oxide. You can see why "rock" is less dense than "metal": it has lots of silicon and oxygen which are very light elements.

Notice something interesting: the "rock" also has iron. Why is this iron in the "rock" and not in the "metal"? The answer is oxygen. Earth has a bulk chemical composition - it has a fixed amount of elements: iron, magnesium, silicon, etc., and most importantly oxygen. Oxygen is, well, an oxidiser. It will want to bond to other elements. When elements are bonded to oxygen, they start behaving like "rock" and not like "metal". However, certain elements will want to bond to oxygen more, quicker, easier, than other elements. Out of the major elements that exist in the Earth, Si, Mg, Al, and Ca really love oxygen. Fe and Ni less so, but they will bond to it if it's around.

Turns out that the amount of oxygen in the Earth was enough to bond all Si, Mg, Al, and Ca and make them into "rock". A little was leftover to bond to some Fe and make it into "rock" as well. The metallic Fe (and Ni) is basically the leftover of this oxidation. Because they had no oxygen to bond with, they remained as "metal", thus forming the core.

Good, now what does it mean for the minor and trace elements?

Note that I'm not using the term "heavy metals" here, because it's a loosely defined term. For example, the list in your link includes titanium, whereas most people in the alloy industry will consider it very light. Instead, I'm using the term "minor and trace" to refer to anything that's not Ca, Si, Mg, Fe, O, Al, etc.

These minor and trace elements are controlled by the presence of "metal" and "rock". They will partition to either the "metal" (i.e. the core) or the "rock" (i.e. the mantle and ultimately the crust), not according to how heavy they are, or their atomic number, or density. They will do it according to their chemical affinity to a metallic phase or an oxide-silicate phase. This is known as Goldschmidt's classification - the cornerstone of modern geochemistry. It categorises elements into several groups: 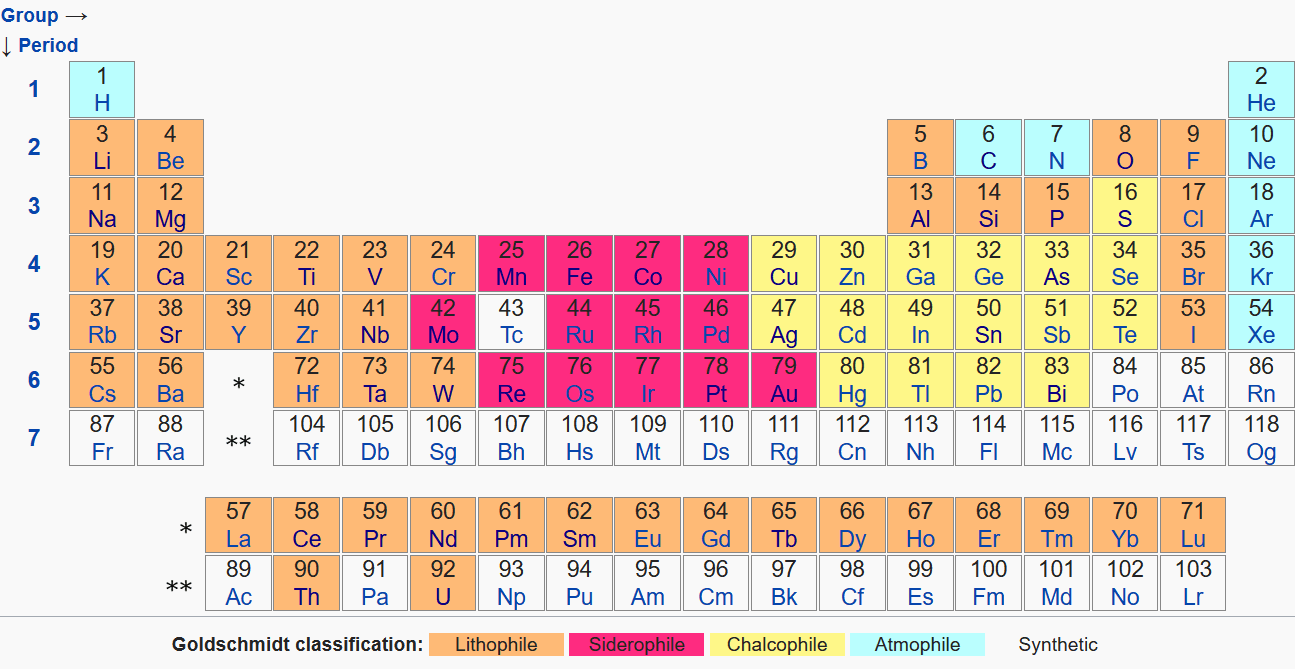 From the relevant Wikipedia page.

So even though thorium and uranium, for example, are very heavy, they will partition to the mantle and not much is in the core. Cobalt is relatively light, but it will go to the dense core. This is one of the reasons why there is so little gold and platinum in Earth's crust - it's all locked up in the core, far away from our reach. They are in the core not because they are dense and sink. There is too little gold and platinum for them to significantly affect the density of the metallic "blob" we call the core. They are in the core because they really like being in molten iron-rich metal (which happens to sink because it is dense). Likewise, thorium really loves being around silicon and oxygen, and the oxygen is in the mantle "rock". This is why it's not in the core despite it being one of the most heavy/dense metals in existence.

Here's an example: take some ice and solid vegetable oil, crush them to small flakes and mix together. Now put them in the sun for a bit. The now-liquid ice and oil will separate, oil on top of water. If you add in a bit of oil soluble and water soluble (e.g. salt) materials, they will partition to their respective phases (i.e. water or oil). Now put it in the freezer again. And take it out again. Not much will change. This is how the Earth will be.

But there's one very important exception!!

We actually have more precious metals than we should. The precious metals (Pt, Au, Pd, etc) are the most siderophile elements known. They should all be in the core. But yet, we have some. Not much, but some. You wedding ring is made out of gold. You have platinum or palladium in your car's catalytic converters. Where is that coming from? One theory is the late veneer theory:

After the Earth differentiated to core and mantle, and while the mantle was still molten, impacts of asteroids delivered additional material to the Earth, in a pre-differentiation composition. Thus, even though all the initial precious metals were locked in the core, we got more stuff. And because all the metal is now thousands of kilometres deep, it cannot access the new precious metals that were acquired. Melting everything all over again might result in some of the late veneer material, the precious metals, to be lost to the core again. But only if it can get into contact, or there are convective forces in the mantle to mix it, or it's happening for long enough for the elements to diffuse it. But since you're suggesting impact events, I don't see a reason why this can't happen.

So to answer your question again:

We will lose some amount or all of our precious metals.

For further reading on some of the topics discussed in this answer:

Not the answer you're looking for? Browse other questions tagged hard-science geology metals alternate-earth .

20
Export economy of Mars
8
Reasons for insanely huge precious metal deposits?
11
A planet without the materials to make jet engines -- plausible?
5
All the Radioactive Metals Inside Earth's Core--How Would They Affect Convection?
8
What geological and chemical changes to the earth's makeup could effectively limit technological advancement
3
Can A Theia-Like Object Make Earth Richer?
3
How do I figure out the size of an Earth-like world's layers and composition of elements

2
Sudden enrichment of heavier elements and its impact to medieval/renaissance society
6
Feasibility of life/existence of a world devoid of transition metals
10
How Might I Design Mountains for My Tidally Locked Planet?
3
If Earth's Core Had Mercury's Super Core
5
How might the cooling of the Earth's core be accelerated?
5
All the Radioactive Metals Inside Earth's Core--How Would They Affect Convection?
8
The Great Oxidation Event...Artificially Imposed on a Tharn-Like Alternate Earth
5
What if Earth's core was bigger than now?
4
How many tectonic plates should my moon have?