How can my Tayan creature excrete waste, whilst buried underground?

Beneath the sands of the Planet Dalia, their lives an abominable creature, a creature that eats beings whole and slowly, slowly digests them for years at a time. This creature is...The Tayan.

Worshipped by the native aliens as dark gods, most of the Tayan’s victims are slaves of nobles and priests, who sought to appease the dark gods with special “gifts”.

As of late, Dalia is often visited by the occasional sadists, who want their enemies to die in the most horrific way possible. Most of the time, victims are stripped of most belongings, as to prevent any rowdy escape attempts. But, my hero steals a weapon, and falls into the Tayans fuller with it.

The weapon is metallic, with a fusion power cell contained inside it. No acid can possibly corrode it, so god the Tayan it would mean an extremely upset stomach. I have just seen a huge design flaw in my creature. It’s maw is shaped in a way so that things can only go in, not out, so regurgitating indigestible materials that way is impossible. And it’s buried underground, so my question is: How can the Tayan regurgitate indigestible materials, given the circumstances above?

Just Incase you want a visual representation of the Tayan, here is a photo 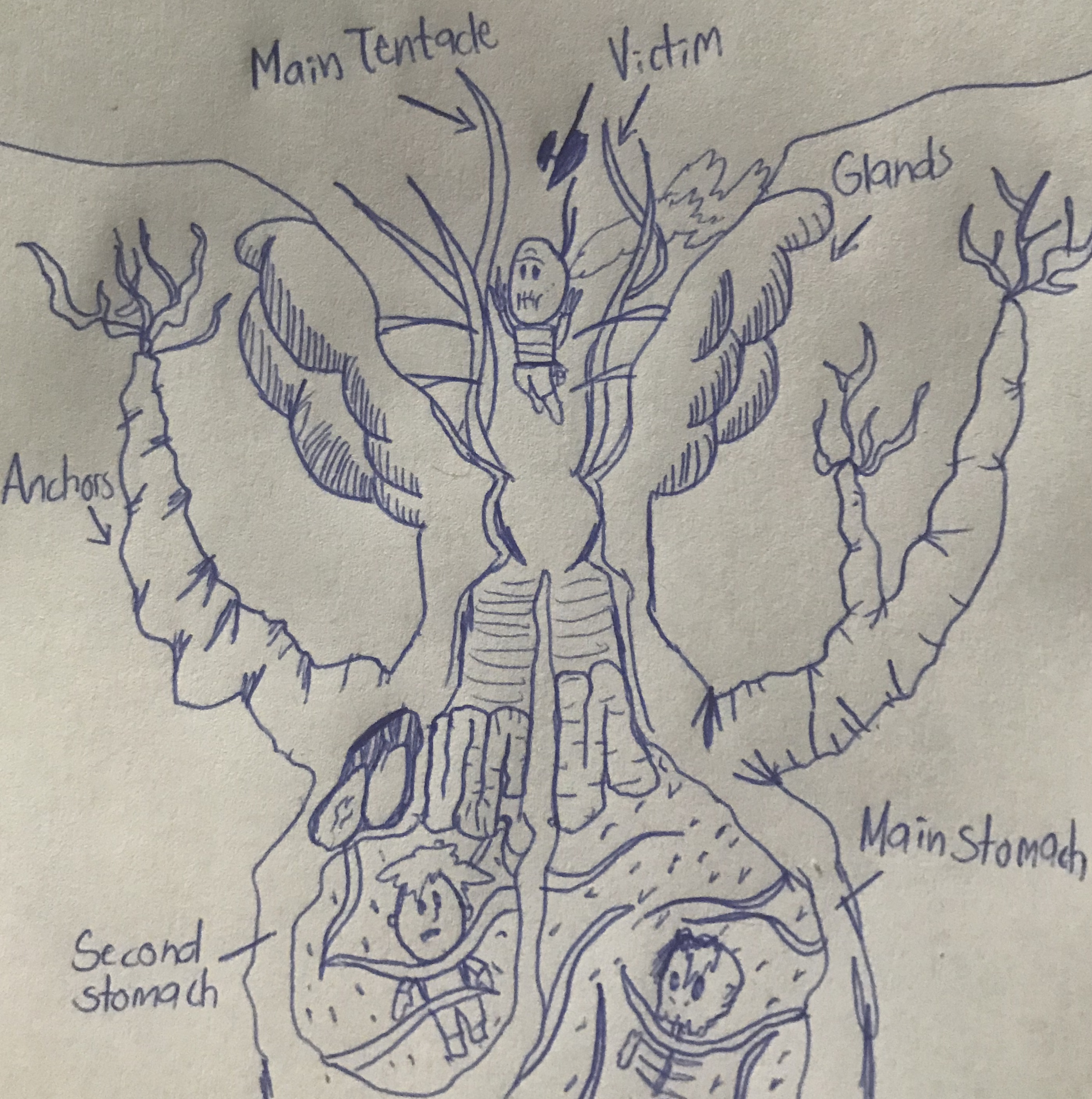 The Tayan is always growing upwards to match ground level

Leaving any undigestable items behind.

Say that in this environment the ground is slowly rising (sand, big rainstorms, dirt storms, dirt volcano, etc), so this plant creature has to always stay at surface level. Instead of moving upwards, it grows upwards to match. It will have a third compartment at the bottom that will compress extra material (metal bits, very hard to digest material, your gun) into as tightly as it can. It then uses a concrete-like or Amber sap-like substance to seal and solidify the unwanted material. New tissue has been prepared by the plant, and it grows a new bottom of the stomach. The old third compartment's nutrients are cut off by the plant, so it can save resources. This also gives the plant stability as it now was a solid pad to be on top of.

This also provides other story opportunities, such as finding fossilized things under these plants or people hiding things in acid proof boxes to hide them and make them unobtainable for years until the unwanted searcher has left and given up.

This is going to be a bit gross, so bear with me. Have you ever gotten something embedded under your skin?

Your body rejects inert matter when it's foreign. If you have something embedded in your skin, a cyst will form around it, full of pus formed by leukocytes trying to protect you from this foreign thing. The cells of your body will slowly work to bring the cyst to the surface, where it becomes a boil. When you lance and drain the boil, you have to make sure whatever foreign matter was causing the problem is also removed, so that the process doesn't just begin again.

I'd combine this process with the way oysters make pearls, or how ambergris is thought to be produced by whales. Your tayan coats inert matter that it's ingested with something to make it less irritating while also having an organ which connects its stomach and skin. This organ specifically forms cysts around the object and slowly moves the object out through the tayan's skin. Since the tayan is constantly increasing its outer surface area as it grows, it never runs out of places on its skin to have a new boil, and it just pushes old "pearls" out of the way, the same way tree roots push through the ground or the way Penguino describes in his answer.

This could be the weakness your hero uses to try and escape the tayan?

Bonus points if people risk their lives trying to dig around tayans for treasure.

Firstly, the Tayan has evolved over millions of years just like any other creature. Over most of that period there were few (no?) metallic fusion-powered items in the environment, so it is unlikely that it would have developed any natural strategy to allow it to deal with such a thing. But it quite possibly has evolved to cope with hard/impossible to digest things. From its life-style it is more than likely that the odd rock would fall into its maw, or it would eat a creature with large indigestible fangs/armor etc. One strategy to survive this would be for it to produce a thick coating over the indigestible item, in the same way that an oyster produces a pearl. Sure, it is stuck with this thing in its stomach, but it is also growing over time so the waste items won't necessarily fill its stomach (in fact they could be used as an aid to digestion by helping grind softer items like bones to a powder - a bit like an ostrich that stores stones in its gizzard).

Secondly, there is a bigger issue. Your Tayan is very large, but presumably started its life much smaller - would have eaten rodents as a child and only as an adult can eat things the size of a human. To achieve this it must have some way to remove material (dirt, rocks) that used to be where its body now is. I can imagine two options that don't require it to spit stuff up out of its maw: either it produces an extraordinarily corrosive elucidate on its outer body, so the rock/soil etc. is dissolved and washes away in solution with ground-water; or it has massive muscles that allow it to push dirt outwards and allow it to infill the space. (Or maybe a combination of both strategies). In the latter case, the ground around the Tayan would eventually start to bulge upwards a bit. See 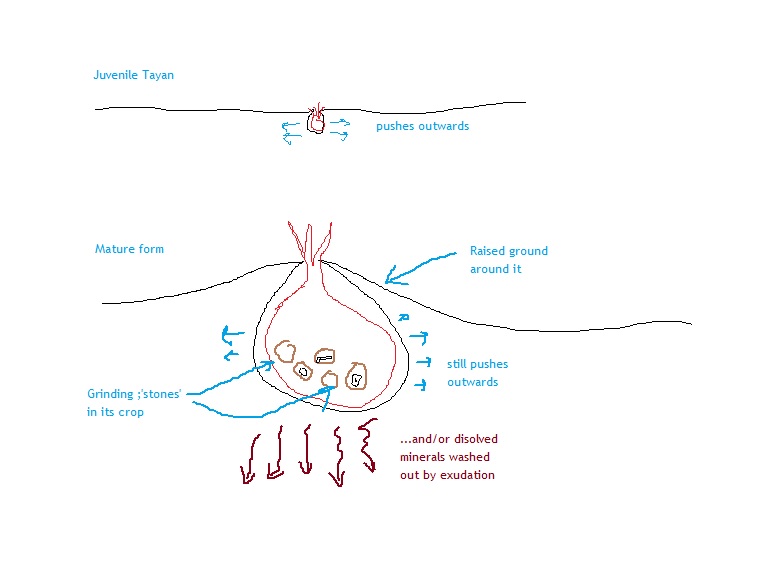 What are the tentacles for?

Shouldn't they be like nose hairs which stop foreign objects getting into your plant? So anything large the tentacles regard as too hard would be pushed aside which would also stop rocks falling in or tree branches etc.

There should be an opening of some sort which can close as what happens when it rains? Your plant would fill up with water and drown.

It would be worth checking out sea anemone for a real world example that is similar to your plant.

It has two stomachs, how do they relate to each other. Cows have four I think, though not sure how they process food. I'd think the larger one does the breaking down and then the soup is passed to the next one for actual digestion. For excretion, it could sweat out unwanted compounds such as calcium which then has an affect of creating a crust between it and the soil which acts as a protective barrier. It would likely need to exude something to protect it from being eaten by worms, moles, rabbits whatever.

I assume the tentacles etc are really tough because you wouldn't want someone with a knife falling in and being able to slash the inside of the Tayan. How does it stop a person stretching their arms and legs out and wedging in the throat or top of the stomach? Does the surface inside prevent this, is the victim paralysed in some way, is the victim restrained by the tentacles or passed to some other set of tentacles further down?

Here's an idea: the Tayan has some kind of organ that grinds all waste material into a watery paste. (The weapon would not be dissolved. Instead, it would be ground into a fine, powdery substance that would just end up mixed into the paste). This watery paste is taken to another organ on the outside of the creature. This organ is littered with trillions of microscopic pores that leak out this "waste paste" into the sand around it.

This seems pretty simple, there's a lot of good answers here you could combine together to handle objects of various sizes, cysts could be used for medium size for example.

Overall, just mimic a lung. Lungs have almost all the same problems you're contemplating it seems? The biggest difference is no diaphragm to handle large obstructions, but if the stomach wall is musclebound then it's all the same.

Small indigestible pieces would be handled the same way a lung does, with cilia. Just bundle up a glob and move it with tiny tentacles to the top of the mouth and out the sides.

IT CAN SPEW INDIGESTIBLE STUFF OUT AS BAIT

My creature, which is heavily inspired by yours, has a similar problem and deals with it by turning itself into a glorified biological pit trap that uses the sand to help it hide in plain sight. I'm just going to quote a question relating to this creature.

Its mouth remains closed, sitting just below the surface and covered in sand until it senses a victim above it. At this point, the creature's mouth opens, and the sand falls into the creature's throat, along with any hapless victims that may have been on the sand (kinda like the 'death from below' attack used by a sandworm on a spice harvester in both the trailer of the latest Dune movie and the movie itself). Tentacles within the throat reach through the sand, grabbing all living things within a certain size range (by the way, humans of all ages and sizes fall within the alforementioned size range) and ensuring that anything stuck on, carried by, or attached to the grabbed victims (such as parasites, clumps of sand, or in the case of humans, clothing or equipment) is removed. Once this is done (it typically takes just under a minute), the creature vomits everything not grabbed by the tentacles up out of its mouth and high into the sky above it and then shuts its mouth. The falling sand then lands on top of the creature's closed mouth, and the trap resets. As an added bonus, anything of value also lands atop the mouth, serving as bait for more prey.

Your Tayan could do something similar, setting itself up as a pit trap that situates the tentacles inside its throat, where they grab prey before the Tayan chucks everything out of its throat, to ensure prey can't escape via being spewed out with the rest of the sand.

Not the answer you're looking for? Browse other questions tagged internal-consistency xenobiology .

10
What is a plausible reason why the creature keeps its victims alive in this stomach?
11
How can my creature keep sand out of its mouth?
4
How to safely drop victims into the Tayan’s mouth?
1
How can a large creature be deceptively fast?
1
Exclusively underground creature experiencing sun-light for the first-time
4
can bacteria or microorganisms produce or excrete blood?
3
What sort of Life Form could my Creature Excrete to Make Its own Habitat?