Could the Romans have Invented Graphene? [closed]

This scenario is inspired by this article.

Long ago, it was thought that this super-cool, extra strong material called carbon nanotubes is a recent invention. After all, what ancient culture could have thought up of something as complex and complicated as a piece of metal as thin as an atom with a tensile strength of 4500 tons per square inch (100 times greater than steel)? Apparently, one such people did.

Turns out that whoever invented the forgotten art of Damascus Steel used strands of carbon nanotubes to make it both superplastic and hard at the same time. How did they make it? I have read nothing answering that question.

The real question here involves another material that is shown to be stronger than steel--graphene. In OTL, it was discovered as recently as 2004 and some articles boast it to be 200 times stronger than steel. The article linked above talks about how graphene could be used to make concrete more eco-friendly.

Now the question is--could the Romans, the culture who invented concrete, have the technology to invent graphene and use them in creating concrete?

The issue here isn't if the Romans (or anyone else) could or could not make graphene, but rather could they deliberately do so.

Buckminsterfullerene, carbon nanotubes and graphene are all natural forms of carbon, and can be found in soot from burning wood, charcoal, coal and other burning products, like grease or fat. The problem is these are random by-products of combustion, and generally found in minute quantities. The fact that some of this would be incorporated into steel manufactured in the fairly small open hearth furnaces available in the ancient world is more of a fortuitous accident than anything else.

Roman science and technology wasn't about quantitative or qualitative analysis (indeed, this type of thinking was very uncommon in the ancient world, and isn't all that common even today), so the very idea of combing through soot to look for unusual forms of carbon would be totally alien to their way of thinking. Even though the Romans (Greeks, Egyptians, Chinese, Sumerians etc.) recognized different elements like copper, gold, iron etc., they generally lumped them together under the superset of "Earth" (yes, I know there were nuances, but this is the internet), so would have no real reason to look for out of the ordinary carbon, or even the conceptual idea that such a thing was possible.

You might also note that despite chemistry, physics and other sciences being relatively mature (after their formal establishment during the "Enlightenment"), Buckminsterfullerene (C60) wasn't conceptualized until the 20th century and finally isolated in 1985. Roman science and technology, even if they did have the scientific foundations to conceptualize it, would not have had the chemical or mechanical ability to produce materials like Graphene with the tools available in ancient times.

Roman concrete hardens with time because of its composition, nothing more. there isn't even any carbon in it. Click for a description of why it hardens the way it does.

Secondly, Damascus steel was made by adding plant matter to the fire used in crafting steel. It's thought that natural carbon strands from plants that were burned in the fires were incorporated into the steel, but there's still a lot of mystery surrounding damascus steel, like whether it was actually better than other steels. A modern comparison would be a brand name product that isn't better than the generic product, but costs more and sells better because of advertising.

Thirdly, is this actual world building, or a history question? Because I'm having a hard time telling. But either way no, Romans didn't have anywhere near enough technology to even accidentally discover graphene.

One has to make a clear distinction between stumbling into something but not understanding how that happens, and willingfully execute a set of actions to achieve a specific goal.

A notorius example of the above is the Lycurgus cup: 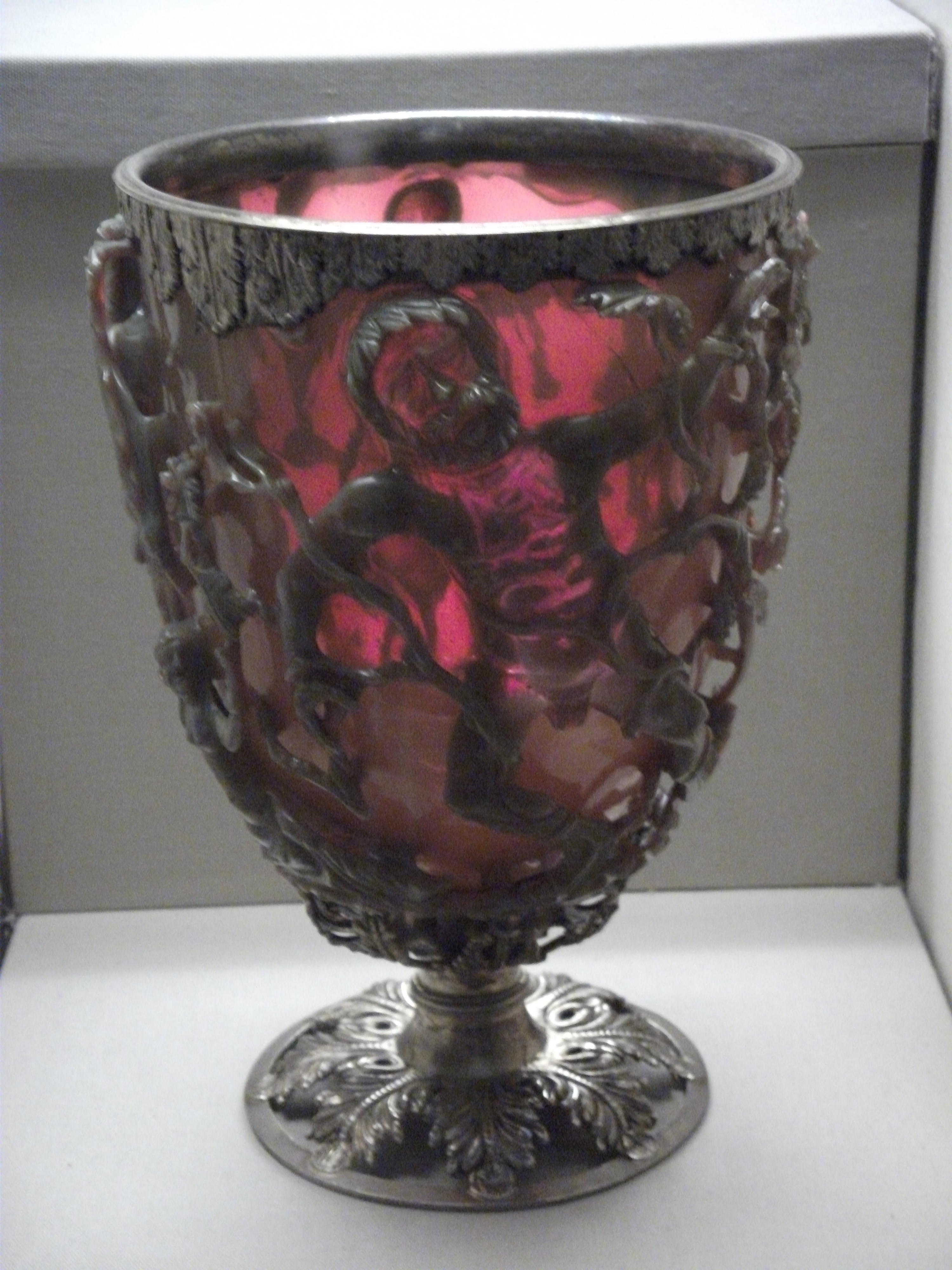 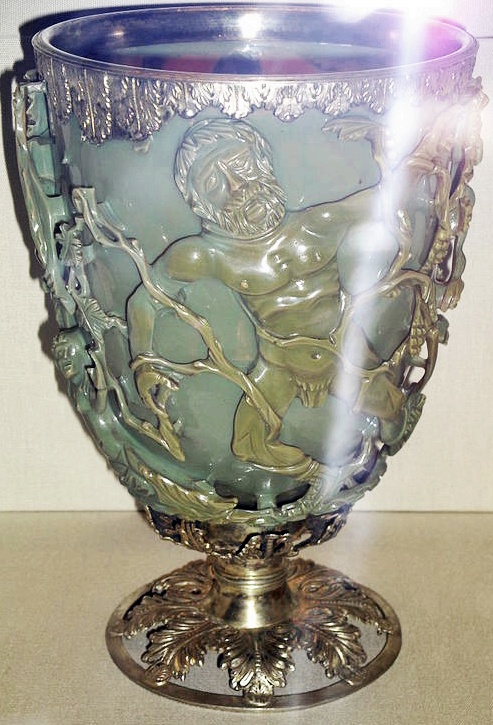 The Lycurgus Cup is a 4th-century Roman glass cage cup made of a dichroic glass, which shows a different colour depending on whether or not light is passing through it; red when lit from behind and green when lit from in front.

The dichroic effect is achieved by making the glass with tiny proportions of nanoparticles of gold and silver dispersed in colloidal form throughout the glass material. The process used remains unclear, and it is likely that it was not well understood or controlled by the makers, and was probably discovered by accidental "contamination" with minutely ground gold and silver dust. The glass-makers may not even have known that gold was involved, as the quantities involved are so tiny; they may have come from a small proportion of gold in any silver added (most Roman silver contains small proportions of gold), or from traces of gold or gold leaf left by accident in the workshop from other work. The very few other surviving fragments of Roman dichroic glass vary considerably in their two colours.

A modern attempt of replicating the glass has found that

Now, coming to your question and based on the above example, it seems possible that accidental discovery could happen.

However, bear in mind that carbon is highly reactive toward oxygen, so any process in which it is involved has to be carried out in a carefully controlled atmosphere. It's true that some carbon fiber composite are obtained by "burning" a carbon based fiber into an oxygen rich atmosphere, but in the case of graphene those are not easily controllable even today.

Summing up, I think they might happen to stumble into it, but not to be able to master the fabrication process.

Graphene invention was possible because because of the advances made in nanofabrication. There were a few groups competing to create the same material, and the winners of that competion (Geim and Novoselov) used a very simple method (scotch tape) to detach layers of graphene from graphite. In a sense, that's what happens whenever we write with lead pencils, so nothing new there.

But, once the graphene was peeled off, someone had to figure out if it's monolayer or not. So, they used and atomic force microscope and looked at many graphene sheets and selected the ones that were the thinnest. Definitely, it would be hard for the Romans to develop anything that could measure microns, so AFM is out of question.

Worse even, the graphite that Romans had access to wasn't some "highly oriented pyrolitic graphite", but whatever they could get from high quality coal. So romans had to understand how to understand that procedure, too.

Not the answer you're looking for? Browse other questions tagged reality-check alternate-history construction materials metals or ask your own question.

7
How fast must a planet with 1.27g spin to allow for space elevators?
5
A Culture Run by Spider Silk
2
Could Rome Have Invented Gothic Architecture?
3
Could Carbon Nanotubes Be Realized Earlier?
33
Could the Romans have colonised the New World?
92
If the Romans found one working steam engine would they have been able to copy and use it?
10
Romans in the air
6
Woodpunk World- 'Super Wood' developed in the mid-late 19th century?