Is it possible to keep secret such a technological discovery?

Welcome to my fantasy, late-medieval world. For the sake of the question, we can divide it up in two major continents:

Continent A is considered the birthplace of my humans and features a solid presence of the other main race (winged humans, of which I talked in a previous question). The geopolitical landscape is divided in a human theocratic kingdom (ruling some of the mainland, the south and the underground cities), a federation of coastal merchant cities, and a somewhat loose union of winged-humans tribes controlling key-locations, mountain ranges, and the northern regions. Those factions seldom agree on something, and infact, have been mostly at war for the latest centuries.

Continent B has both humans and winged humans, some native of the place and some descendants of pioneers from A. Apart from some smaller kingdoms, B's much more uniform, the majority of the land is under the control of a feudal empire.

A and B have trade routes via sea, the voyage being around two months long, a little less with good winds. 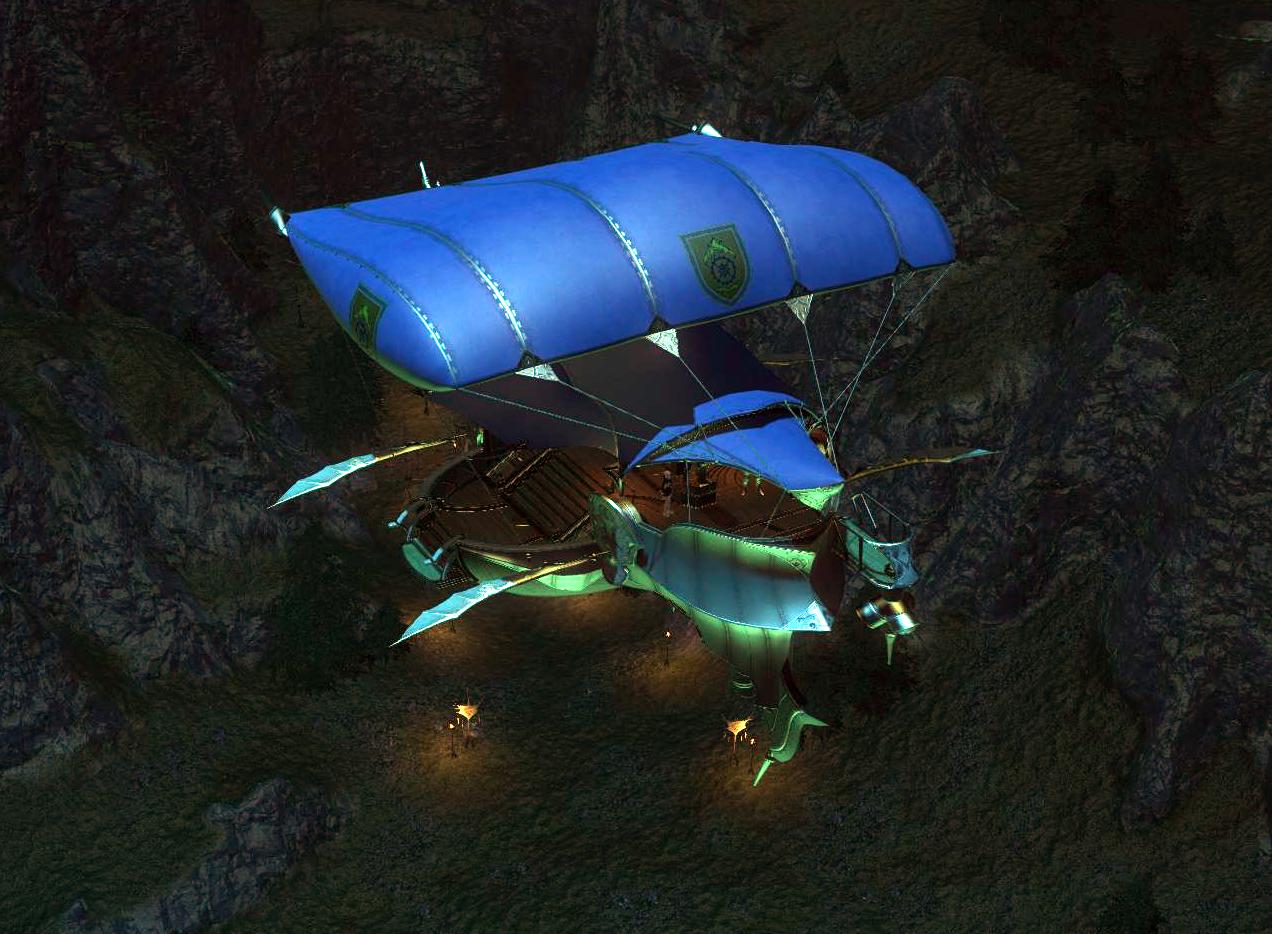 Suddenly, B invades A with airships. The airships are powered by a particular magic that flows in the air, but the focal point is that no one had been able to use that magic as a source of energy before.

A's kingdoms are dumbfounded. Nobody expected that. There were some signals that something was off (trade of some materials, mainly metals, somewhat diminished months before the invasion), but overall, nobody was expecting something like that.

If the kingdoms of A had spies at the court of B's emperor, they failed miserably.

So, How likely is that B has been able to develop a whole new mean of transport without most of A's noticing?

Clarification (as requested in the comments):

The Fewer People, the Better

Objective: Maximize the effectiveness of the new aero-magic engine in the conquest of Continent A in the limited time available. Use of the aero-magic flying machines a terror weapon will only last so long. Countermeasures will inevitably be created.

Counter-Intelligence: If the kingdoms of Continent A are made aware that the aero-magic engine is possible, they may seize on the knowledge and develop their own. Thus, it is of utmost importance to keep the aero-magic engine a complete secret. This will be accomplished in the following ways:

An independent military leader with his own research group.

It is most certainly possible to pull this off.

The entire prototype part can be done in complete secrecy in some random workshop in the middle of nowhere under tight guard, until it can be tested. Since the things aren't big, it wouldn't even require all that many workers and resources.

Now for mass production. This is trickier because large military projects are less likely to remain completely off radar. However this can be a solution:Closed cities

A sort of special place where one has access to skilled workers, materials and a spy can't just get into. These can be pretty well hidden too. The Americans needed satellites to find some of the Soviet ones.

You also have the advantage that with medieval communications it could take a month or two to get a message across.

Depending on how easy it is, maybe you could also make it look like you are building normal ships and then have them be quickly changed into airships.

You can have each part produced by different companies in different areas. Nobody has any idea of what the whole is.

Develop your own Area 51.

I should think it is pretty likely this could be done.

The key you need is at this link, Distance to the Horizon. It provides a formula; $D=3.57\cdot\sqrt{h}$, where (on Earth) D is in kilometers, and h is 'height', the distance above the ground of the observer, in meters. Other sites will help you convert miles to meters.

On Earth I'd make it 40 miles for safety, and develop your airship there. That amount of empty land might be relatively easy to find in a late-medieval society, perhaps in a desert, or just invent a small handy-dandy uninhabited island 40+ miles offshore, where they decide to develop this technology, and the autocratic king can have a "coast guard" that sinks any ship that attempts to sail in that direction. Or obedient subjects that just don't attempt to go more than a mile offshore because the king has prohibited it. Or the king could mandate that every ship includes his emissary, and the emissary has orders (he doesn't know why) to prohibit such travel.

It's possible, after all governments do it all the time. So for the most part, it's easy. At first it is the noble and his team of scientists and you. You have the prototype engine, and now you need to build a ship.

Second, once the pieces are complete, have a special team of your personal team put the airship together, along with the noble and his crew. Keep them all locked up at the castle, monitored at all times by your personal guard so none of them have any chance of spilling the beans.

Now here comes the hardest part - mass production. You have a 2 month window to get your armada in the sky, maybe even 1 as you don't want to give A any time to try to amass their army. You also have to factor in your own travel time to reach continent A. As you can see time is the biggest thing against you. Adding more people to your crew decreases time, but increases the chance of a leak, and vice versa, so you have to find a balance.

You should let 2 other of your most trusted nobles (so there are 3 in total) in the loop along with their crew, to give yourself a large enough force to build the ships, but while also minimizing the potential to leak information as much as possible. Also, increasing border security on ports, having extensive background checks, and forbidding all ships heading towards A from leaving port is will also slow down potential spies very much.

Once again, force all the people with knowledge of the project to live in the castle and never leave until the airships are build. Assuming each noble has a crew of 10-15 specialists, you will have 40-60 people working on the armada. This seems like a lot, but trust me, for inventing a new technology and preparing to invade an entire continent it's a pretty small crew. Remember that the parts can be allocated out to artisans to build individually, so you can make this process even more efficient. You will need to be very fast to beat the 2 month window to get your people off the ground, but I think it can be done.

I hope this helps, and happy world building.

Do it Manhattan project style. First you have a small group of researchers develop the technology and some skilled workers to make the prototype.

Once you get the prototype working, you send out orders for each part to different venders, having different craftsmen in different cities making the materials for the ships.

Any parts that you can't trust a civilian with are done by your in house craftsmen.

Finally, once all the parts are ready you bring call up your soldiers and have them help assemble all of these ships as quickly as possible. Researchers do delicate work or important details, while regular soldiers are your manpower.

The goal is to have as many as you can in the air in one month, so you can set out across the sea to continent A before a messenger would be able to get back, so even in the odd chance a spy did see something, the enemy can't prepare for it enough to prevent heavy loses.

I would suggest doing just like the Brits did in WWI with tanks : give it an inoffensive name, have very few people know the whole project, tell nothing to the manufacturers about the nature of the project, or just tell them it's something common and uninteresting, test in a deserted area.

You could pretend you are just trying to expand your merchant fleet or create better boats for fishermen. That would remove most suspicions about the military nature of the technology.

I would also suggest doing the magic stuff in the end, and in secret, to prevent people from knowing magic is exploitable.

Not the answer you're looking for? Browse other questions tagged reality-check technological-development airships geopolitics or ask your own question.

9
How fast can a society be 'upgraded'?
22
Realistic sky of an Earth-like moon orbiting a gas giant (length of day and size of celestial bodies)
5
Unplanned Colony: what industrial level could be recreated in the short-term?
18
Comfortable way of entering and exiting Airships anywhere at will
12
How long can a nation maintain a technological edge over the rest of the world?
6
Post-apocalyptic aircraft
7
How functional/versatile would airships utilizing perfect-vacuum-balloons be?
2
How feasible are these two drastically differnt technological pathways for different civilizations?