Would this simplex ternary system be stable?

I'm trying to make a trinary star system but I'm not sure how it would work. The primary star is an M0Ve star (red dwarf flare star). The orbits of the other two stars are slightly more complicated. Both other stars (T0 and Y9e) orbit around each other,and a planet orbits around the same barycenter, outside of the brown dwarfs (T0 and Y9e). 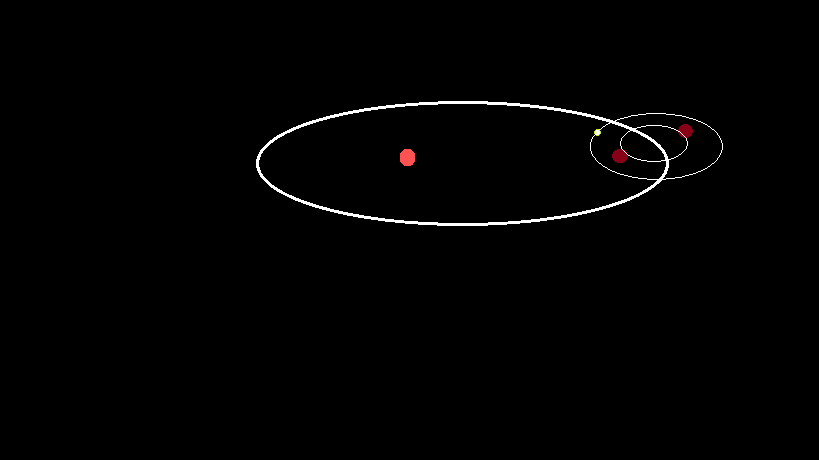 Is this system stable on the scale of hundreds of billions of years?

Distances and mass ratios have to be large. E.g. The mass of the sun compared to any of the planets is large. This makes the sun the dominant gravitational actor in our solar system.

Jupiter has a raft of moons, some of them quite large, but all are tiny compared to Jupiter.

The earth and moon are unusual:

So if you want stability: The orbit of the binary pair around their barycentre has to be small compared to their orbit around their primary.

Despite being far from the binary pair, the planet should not be appreciably closer to the primary star over the course of its orbit.

Second order approximation: Look for resonances. Look for them in various coordinate systems.

Third order effects: A pair of stars, even small ones, that are orbiting just out of Roche limit I suspect will have some relativistic frame dragging.

I think you are going to have to model it and see.

Not the answer you're looking for? Browse other questions tagged reality-check planets orbital-mechanics stars or ask your own question.

27
Can you add a mini moon to Earth?
5
Sunrise and Sunset In a Ternary/Trinary Star System
4
A Stable Red Giant Trinary System
2
Would these metabolisms be realistic for this ternary system?

7
Is this circumbinary planet set up in a stable manner?
6
Could life develop in this ternary sytem?
4
Habitable planet in a multistar system
2
How bright does this planet look from its neighboring planet?
5
Explaining a Low-Mass Brown Dwarf
8
Brown Dwarf Star vs Gas Giant as parent for habitable moon
1
In Search of a Super-Bright, Super-Stable Star
4
A Stable Red Giant Trinary System
7
How to Calculate Apparent Magnitude/Brightness of Planets from Within the same Solar System