How can I locate myself in a random point of space?

I'm creating a universe where humanity has reached the stars. They've colonized a few star systems and, obviously, FTL drives are a common thing. They basically jump you to another location - no pocket universe or speeding "faster than light". A simple "teleport".

For this to work, people need the coordinates of the destination in order not to jump inside of something like a planet or a sun. But blind jumps are an option in a moment of desperation.

Suppose my little ship makes a blind jump and, by sheer luck, it doesn't end up in the middle of an asteroid. Since it was a blind jump, I have absolutely no idea where I am - and thus I need to find a way to map my surroundings.

I don't know much about sky observation (so pardon me for my ignorance), but I think that even if I could fit a giant telescope lens in my ship, it would still be a hard and long process to look around 360 degrees, from a random perspective, and find some known cluster of stars to guide myself by.

Suppose I make a blind jump and need to locate myself.

How would my ship's computer be able to pinpoint my approximate location?

Note that "computer" also includes any peripherals needed by the navigation system.

Expressed in popular science terms: pulsars are our natural galactic GPS system. Pulsars are how the Voyager records leave a map back to the Solar system for anyone that finds them. 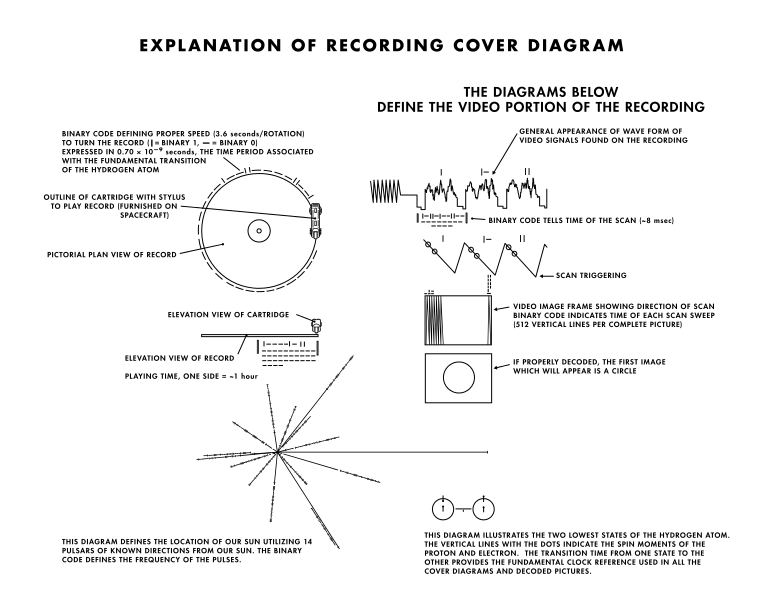 The pulsar map is on the lower left

Pulsars are really easy to detect and get a bearing on. You say that wherever you end up will be at least roughly mapped. I am willing to bet that pulsars are among the first things that will be mapped once humanity starts exploring space, because it is so easy to do. They kicked off a real boom in radio astronomy when the first pulsar was detected. With that in mind, your ship will have a good fix of its position within seconds, and in no more than a minute.

If you want to drag this out... have your ship's phased array get banged up as you make the jump. With a distorted/damaged/broken phased array, getting a fix on those pulsars will be harder... you may have to use something like a directional antenna sweep the sky mechanically before you get a good fix.

This answer ends with a four step method to return to Earth from any distance less than one hundred million light years making four jumps through space.

The average, typical region of space within our galaxy is in interstellar space a few light years from the nearest stars.

The average, typical region of space within our universe is in intergalactic space a few hundred thousand light years to a few tens of millions of light years from the nearest galaxies.

Since the known universe has a border that no light from beyond has ever reached Earth, astronomers have never detected any objects beyond that border, which is believed to be 46,000,000,000 light years from Earth now due to the expansion of space.

So if the random jump could jump to anywhere within the physical universe, the most probable type and vast majority of random jumps would be to some location that is far beyond any astronomical bodies mapped by Earth, a jump to a place where it is totally impossible to find the way home.

Therefore, it seems necessary that the required jump energy, or the programming of the computers, or some other factor, puts a limit on how many thousands or millions of light years the ship can jump in a random jump. Otherwise the crew will be lost forever and have to make a new home in some unimaginably distant region of space.

They would have to scan all 360 degrees of space around them for the brightest objects in various wavelengths of electromagnetic radiation. I guess that about 10 objects in each of the wavelengths chosen should be enough.

In Earth's location close to the Sun, the Sun is the brightest object in most wavelengths.

The first radio source to be detected, and thus one of the brightest as seen from Earth, is Centaurus A, the region at the center of the Milky Way Galaxy. By definition, the Sun is one Astronomical Unit, or AU, from Earth. A parsec is a distance of 206,264.806 AU, and Centaurus A at the center of the Milky Way iss over 8,000 parsecs (or about 26,400 light years) from Earth, or 1,650,000 times as far away as the Sun, but is of similar brightness in radio wavelengths.

The Sun, the Moon, and several planets appear brighter in visible light than any stars as seen from Earth. In interstellar space no planets would be visible and the brightest objects visible would be various stars.

Here is a method to get back to Earth in a few jumps from a position less than 100 million light years from Earth.

Thus they should be able to make a jump that takes them directly to the approximate region of the Milky Way Galaxy where Earth is.

There are over a hundred globular star clusters orbiting the center of the Milky Way galaxy. If they jump into the approximate region of the Milky Way galaxy where Earth should be, they can try identifying at least three globular star clusters and measuring the angles to them. By comparing the angles to them and comparing it to the angles to those clusters as measured from Earth they should be able to calculate a much smaller approximate region where Earth should be and make a jump into that much smaller region.

The list of the 92 brightest stars as seen from the Earth includes some very distant stars. Naos is 1,100 light years from Earth, Sadr is 1,500, Wezen is 1,800, Alnilam is 2,000, Aludra is 2,000, and Deneb is 2,600 light years from Earth. So since the spaceship should be fairly close to the Sun by now, some of the stars that appear brightest from the spaceship's position should be among those that appear brightest as seen from Earth.

So they make another jump that should take them to just a few tens of light years from Earth.

Once they are within a few tens of light years from Earth, identify the stars that appear brightest from their new position and match their spectra with the spectra of the brightest stars as seen from Earth. There should be a great overlap between the two sets. Identifying three stars should be enough to calculate the position of the space ship and the position of the Sun. Take the spectra of the star that is at the calculated position of the Sun, check to make sure it matches, and then calculate a jump back into the Solar system.

So four steps should be enough to take the spaceship back to the solar system from anywhere within a hundred million light years. And with superior navigators and equipment, or if the ship jumps to a location much closer to Earth, the number of steps and jumps to return to Earth should be smaller.

This answer depends on how exactly blind jumps and your coordinate system work.

Given that the computer can translate a set of coordinates into an FTL teleport, it's plausible to assume that the reverse is (at least theoretically) possible, by having it reverse engineer the teleport destination based on readings/logs of the FTL drive. This of course could be as time consuming or as error prone as needed for the story. Time sensitivity could even be an issue, since the reverse engineering could become more error prone as time goes by.

One way of making this a little more interesting would be to have the FTL drive need coordinates in order to align/focus it with a target location. This would then imply that blind jumps would just randomly teleport you to wherever the FTL drive happened to be pointing at that moment. In this case, it should then theoretically be possible for the computer to estimate possible coordinates based off its records of the FTL drive alignment. This could even be combined with other solutions (like the Pulsar suggestion by MichaelK) to further narrow down your coordinates.

Not the answer you're looking for? Browse other questions tagged science-fiction astronomy faster-than-light navigation .

68
How would an astronaut conclude he's on Earth, but 600 million years in the future?
37
How to get directions in deep space?
14
How can I know where to point my spaceship?
16
Stellar Navigation for Dummies - Finding your way home
19
How to determine one's position in space?
19
Can my spaceship figure out its position using Cepheid Variables?
14
How far would we have to travel to make all of our familiar constellations unrecognisable?

11
Can a planet be on a stable orbit at a Lagrangian point of a binary star system?
9
How would one mark directions in three dimensional space without north/south/east/west?
4
How can the entire universe be mapped?
14
How can I know where to point my spaceship?
22
Is it dangerous for a ship's crew to get stranded in a nebula?
4
How to determine port and starboard on a rotating wheel space station?
18
How would you have a space ship set out on a journey to a distant planet, but find themselves arriving back home without realising it?
47
How long can it really take to calculate a hyperspace jump?