Could a Tank Survive a Nuclear Blast?

In the red corner, a top of the line Main Battle Tank, you can have your pick, but let's say a tricked out M-1A2 'Abrams' with a full Nuclear-Bio-Chem Protection kit.

In the blue corner, a Nuclear Device. Let's start by assuming a standard Teller-Ulam design, say a W70 warhead set for about 15kt TNT equivalent yield, similar to the Hiroshima bomb.

As an initial set up, set the detonation point 50 meters above ground at about 500 meters from the tank. The tank is on, sealed, and facing towards the blast. There is a clear line of sight.

Would the crew survive? If not, what would be the minimum distance to give the tank crew some sort of fighting chance? If yes, how much closer can the detonation take place? Alternatively, could some modification be made to the tank to dramatically increase survivability against atomics?

Note: As the hard-science tag is meant to indicate, feel free to persuade me with numbers, if so inclined. Numbers are sexy, especially when it comes to nuclear attacks and radii of total and utter destruction! In part inspired by this story.

That "Abrams" tank is 50m below and 500m as measured on the ground. Pythagoras (at least his theorem) says that's about 502m away, so that is the number I am going to use as "the distance" from the nuclear explosion. This is considered a "surface burst" when surveying literature about nuclear explosions.

There is a clear line of sight. This is (somewhat) important to establish, because atmospheric conditions affect different aspects of the blast. John Walker was nice enough to make an interactive version of the United States Department of Defense's and Energy Research and Development Administration's 600-odd page report on nuclear weapons. Despite the date of the report (1977!), the science appears to be good, and I will be using this as a source to inform this answer.$^{1}$

The Energy the Tank Receives

A nuclear explosion appears to have two main destructive methods of "doing damage" to things around it. There are the mechanical shockwaves of the explosion and then the thermal radiation from it. It is estimated (from section 7.01) that around 70-80% of the energy released$^{2}$ from a nuclear weapon is thermal, and the remaining 20-30% is kinetic energy in the form of the blast wave. I'll be using the values of 75% thermal energy and 25% mechanical energy.

Several sections in chapter 7 deal with the energy delivered by a blast to targets at varying distances. Sections 7.07, 7.96, and 7.101 build upon each other and eventually yield an equation for the amount of thermal radiation received by a unit of area ($Q_{thermal}$) at a particular distance D is: $$Q_{thermal} = \frac{\tau E_{thermal}}{4 \pi D^2}$$

This comes in the form of the "blast wave" which the tank will need to cope with. The energy does not hit all at once; indeed, the blast wave hits and then the pressure gradually decreases until it becomes negative. At which point, the atmosphere rushes back in, and restores the pressure. The peak pressure and dynamic pressure discussed in chapter 3 are important values to consider for such a blast. Section 3.19 claims that most damage is caused by the blast wave hitting a target, and not be the subsequent phases of the blast wave. Although a tank designer would be concerned about this, I am going to simplify this a little and ignore the subsequent phases.

As this is a surface equation, we can take the advice from 3.34, and treat it as an air burst with double the energy. This is not always the case, and it is an oversimplification, but we would need much more information to determine exactly how much energy (and pressure) gets at the tank.

If we take the Kingerly-Bulmash equation to estimate the overpressure, we come to an overpressure of ~258.6 kPa. That is enough to "severely damage" cement buildings four times over.

The Ability of the Tank to Cope

This is a little difficult, because it is in the best interest of many tanks, tanks used to defend living solders on active duty, to not publish their material properties. Specifically, I looked for and failed to find properties of Chobham Armor, a type of depleted uranium armor.$^3$ What I do know is this; heavy armor variants involves a depleted uranium layer along with one, but likely more, layers of composite material.

So I do not become the focus of investigation of national entities (the rep here isn't worth it), I'm going to look at something I can find information about; uranium. With a bulk modulus of 100GPa, it can get very thin before it deforms due to the shockwave of our nuclear blast. Due to the fact that our tank isn't a box, and it has angles to it instead of flat walls, even the reflective pressure, which can spike up rapidly, may not be enough to deform the tank. Additionally, uranium is good at conducting heat, so our tank needs insulation from other sources to protect its occupants. Finally, uranium is good at absorbing the some deadly types of radiation, so it can offer protection there for the crew.

It should be noted that weaponized nuclear explosions generally do not cause items to become radioactive. As a matter of fact, you can visit ground zero at Nagasaki without radiation suits! The metal of the tanks should protect the inhabitants from most cancer-inducing radiation.

The blast wave itself would most certainly push the tank. Weighing in at about 69.54 tons, this isn't trivial. If I do a gross oversimplification and model the tank as a box with a 93 in high and 144 in wide, it has an area of around $8, 639, 982 mm^2$ (this is an overestimate). That's around 85 613 588 J of energy. Assuming this is all kinetic energy, and using $K=\frac{p^2}{2m}$ (solving for p), the tank gains 52 m/s in speed from the blast wave. Obviously, the tank's grip on the ground will determine how far it goes. We'll use the kinetic friction coefficient found here; .57. Through a series of calculations, I find the distance travelled by the tank is about 46 cm, over 9.3 terrifying seconds. This is because the tank is so massive and has such a good grip on the ground. (Once again, I should say that the 46 cm is from the initial blast, not the total blast wave, which may push it a little further.)

It seems the tank, under these conditions, will likely survive, but the occupants will not. All said, it appears that a nuke-proof tank needs a lot more to protect the inhabitants than a uranium shell. Something like Object 279 may do. I could not find or calculate exact details on the needed properties, though, but it is a place to start.

You need a lot of stiff and soft material between you and a shockwave to prevent the shockwave from hurting you. Looking at bomb suits, you need foams and some other materials to protect you from the blast wave. The exact configurations of these things are beyond my expertise and the length we would like to see on SE sites.$^4$ I therefore will just say this: these foams could also help insulate you from the thermal energy of the blast.

If you play with the Kingerly-Bulmash equation, you will notice that a human can survive the blast wave from about 3km away. Obviously, a tank can get closer, but I do not know how much the tank wall impedes mechanical waves. Therefore, I know that the tank can be closer, but I cannot confidently say by how much.

At 3km away, you need to worry more about the radiation than the shock wave. Not knowing how much an Abrams tank absorbs radiation, I can only say that the tank will likely be a good spot (with its high-density armor) to avoid irradiation. Uranium is used, after all, in shielding radiography cameras. As uranium absorbs gamma and x-rays well, it will greatly help deter the negative effects of radiation in a nuclear blast. It is supposedly five times better at absorbing radiation (x-rays and gamma rays) than lead! In fact, some people are trying to figure out how to use depleted uranium in concrete to contain nuclear waste.

It HAS been done, with a much less survivable "Centurion" British tank. The blast moved the tank a whole 5 feet. It was damaged and the sensors placed inside showed that the crew would have most likely been killed from the pressure wave. The M1A1 is much more survivable.

Another thing to note, the instantaneous radiation of the detonation is LESS lethal than the blast and heat, unless it is the legendary... NEUTRON BOMB! Then, the radiation is lethal to a distance greater the blast/heat.

The site I used for my source is below.

Operating a M1A2 there are ICBM and Nuclear Protections from pressurizing the inside, sealing all hatches and hull to blowing out the inside of the tanks air of radiation.

They would likely not survive. Even IF they had some magical lead shielding which would protect them from some forms of radiation coming from the blast they still would die because their lead armor wouldn't protect them neutron radiation. The only way they could survive FOR AWHILE is to have some kind of layered shield protection of multiple substances. Something that could at first deflect the non neutron radiation like the lead then some other material to absorb the gamma radiation from neutron absorption which would occur and finally some more lead to protect from the gamma radiation. FYI, This tank would be incredibly heavy. As PipperChip told you even once you protect your crew and tank from radiation you now need to protect them from the blastwave. All in all this is not cost effective for the protection of less than 5 men.

They are pretty durable vehicles. Withstanding massive explosive forces at point blank range. But the question is what aspect of the blast are you talking about? The EMP from the blast. The air detonation wave? Ironically the Abrams M1A2 uses depleted uranium in it's armor matrix. Depleted uranium is used as a radiation shield so it may survive the blast, the emp and the ensuing fall out. Tanks have already survived nuclear blasts, an M4 sherman was modified with lead coating for the Trinity test. 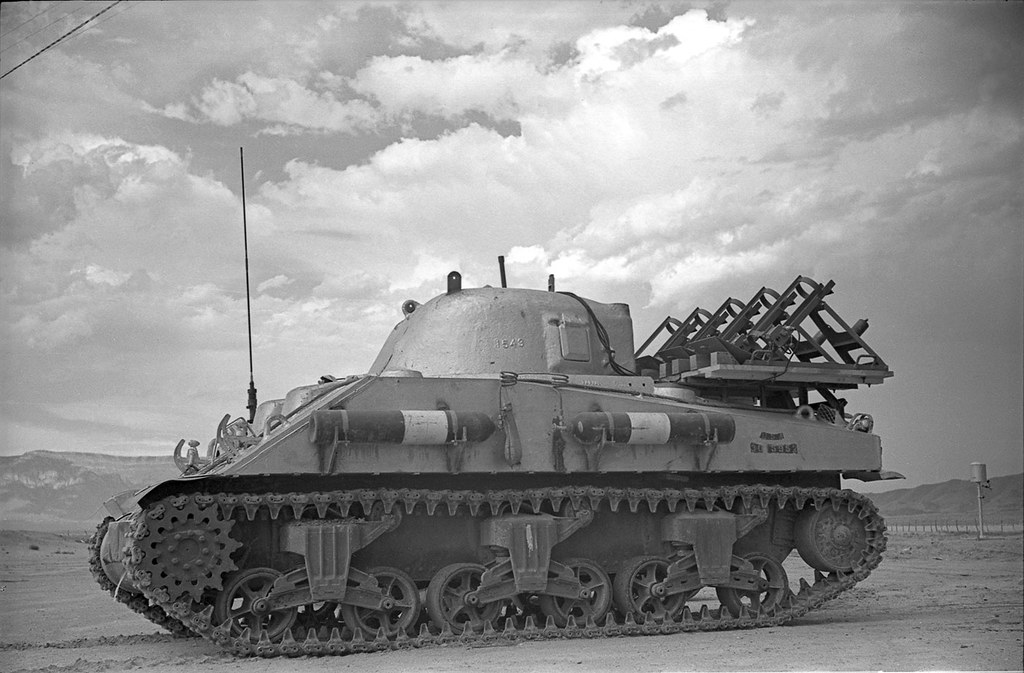 Not the answer you're looking for? Browse other questions tagged hard-science explosions or ask your own question.

9
(How) Can I make directional nuclear blast?
17
Could edible fish live in a large water tank used as a radiation shield on a spacecraft?
9
Nuclear rockets and EMPs
3
What's strongest non-nuclear explosive I can make with nanotechnology?
11
Could a super high pressure canister act as a bomb?
10
Fortifications capable of withstanding atmosphere-clearing blast
3
Is antimatter boosted nuclear weapon theoretically possible?
8
Could a robot that can survive at the center of the Earth also survive a nuclear explosion?