How can a Type II civilization influence accretion rates from a debris disk to a passing star?

This is supposed to be a test of the hard-science tag. All answers to this question should be backed up by equations, empirical evidence, scientific papers, other citations, etc. Speculative or unreferenced answers, as well as those not supported by strong scientific theory, are not welcome. Long, comprehensive answers are desirable, but length and quality aren't always correlated.

The star stands out from other Sun-like stars, though, because recently a strong stellar wind has developed, which comes with a mass loss rate of about 1.0 $\times$ 10-6 M$_{\odot}$ per year. The stellar wind may die down eventually, but for now it's having quite a strong effect on the star and its disk. It is thought that much of the inner debris disk will be blown away very quickly.

A nearby red dwarf of about 0.76 M$_{\odot}$ (not a flare star, fortunately) is passing through. At its nearest point, it comes extremely close - an astounding 1500 AU away from the B-type star!

There will absolutely be some accretion by the red dwarf. But how much? An advanced civilization (Type II on the Kardashev scale) is watching closely. They're considering the red dwarf as a sort of "rest station". If planetesimals form, they could be mined for raw materials, and any icy bodies could be an excellent source of water - which can be turned into hydrogen and helium.

How can they figure out just how much dust from the debris disk and icy bodies will be captured by the red dwarf? Can they then predict if planetesimals are likely to form (though subsequent planetary formation isn't necessary)?

That bit could be construed as pure science, which it may be. But there's another, much more important question that's absolutely related to world building: Can the Type II civilization do anything to influence accretion?

This is what I'd like answers to focus on.

I've done some reading, and the situation is plausible. Accretion rates can be computed, and whilst encounters between stars this close are extremely rare, they're still possible. I didn't list density parameters, but those can be found rather easily in the scientific literature. Taking all this into account, I'm looking for answers based in hard-science.

Perhaps your best source here is the recent Ribas, Bouy, and Merín 2015 paper, distinguishing between primitive and processed disks by the mass of the stellar object. 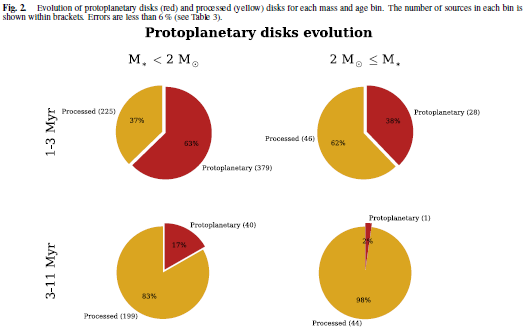 The take home point seems to be that larger stars tend to process or blow away their disks relatively quickly.

The actual N-body dynamics you describe (two stars and a granular disk) are far too complex to be easily treated here, but this is the closest I could find.

Recent simulations of the ONC cluster indicate that at least 20% of the stars undergo encounters closer than 300AU during the first 3Myrs of the cluster development (Olczak et al. in prep.).

Naturally such encounters will influence the mass and angular momentum distribution in the disc. The total mass of - and the mass distribution within - the disc after an encounter are important, as this directly influences the likelihood of the formation of planetary systems.

The change of the angular momentum distribution due to an encounter is of relevance since it is still unclear how the disc loses enough angular momentum that accretion of matter onto the star is possible. Although it is unlikely that encounters are the dominant source of angular momentum loss, their contribution is probably not negligible.

The main discussed effect is in a disk-disk context and has to do with changes in the angular momentum of the star-transferred mass that does not fall into the capturing star, and its impact on planetary formation. If you're interested in the topic, the entire paper is definitely worth a read, as is the bibliography (esp Pfalzner).

Speculation about the abilities of a Type II Civ is not a clear-cut case of hard-science, although we can definitely impose lower and upper bounds on their ability to modify a stellar environment based on their relative energy budget.

A Type I civilization has a low budget of ($10^{15}$ watts), while a typical type II could spend $10^{26}$ watts, whereas a Type III culture at its peak would command the power of a hundred billion suns -- upwards of $10^{37}$ watts. The best discussion on this remains the Freitas book Xenology.

From the perspective of a mature Type II civ, stars are merely piles of valuable resources that have unfortunately caught fire and sunk into the fabric of spacetime. Protoplanetary disks have 2 advantages: a distinct lack of deep gravity wells and the fact that they are not on fire. Again, this is speculative, but given that their energy budgets place overcoming the binding energy of planetisimals easily within their reach, they would look to a low-gravity protoplanetary disk in a way similar to how a 6-year old would look to Halloween: lots of delicious candy just lying around for the plucking.

I decided to start working on my own answer after I asked the question, so here's the result of a few days' work.

An excellent (and very recent) paper regarding accretion is Debnath (2015), which can be applicable at least for material gathered onto the surface of the red dwarf.

The issue is that this is typically applied in binary systems, while, presumably, the red dwarf is traveling at a speed greater than the B-type star's escape velocity. It is, therefore, not orbiting it. So I'm not sure if the formula is valid.

We can't just use this, though, because there are other things to consider. First, all the gas and dust in the disk is orbiting at the same rate as this object, so $V_0 \neq v$. Second, the conditions change. For each orbit the object makes, the density of the matter in the path through the disk changes, because it has been swept up. Finally, the object may be severely affected by Stokes drag.

The density issue can be dealt with by simply assigning the object a number of orbits $n$ at time $t$, and saying that during each orbit, it accretes $x$ percent of the gas and dust in its way. Once this is known, an expression can be derived for the accretion during each orbit.

I feel bad about not doing any actual calculations (i.e. with actual numbers), so I'll discuss a special case here: A dust disk surrounding a spherically symmetric body.

I still haven't put in any numbers, but it's at the point where you don't have to do much to find the result.

Accretion by planetary-mass objects in debris disk has been observed, such as in Epsilon Eridani's debris disk (Greaves et. al. (2005); explored also by Backman et. al. (2008)). A good overview of the process is given by Janson et. al. (2013), while it was simulated by Stark & Kuchner (2009) and Nesvold & Kuchner (2014). The only issue now is to establish whether or not a Type II civilization could build such an object.

Footnotes
1This means we have to neglect rotation, which could be a problem.
2Were we to assume vanishing pressure, as in a true dust solution, things could get simpler (and, perhaps, more interesting). For now, though, we'll treat it as a perfect fluid, and treat it as homogenous.
3I'm using the convention in which a comma indicates a partial derivative and a semicolon indicates a covariant derivative.
4Raising and lowering indices via the metric tensor.
5In "thin disk" scenarios, the red dwarf might not undergo spherical accretion.

Debnath, U. "Accretion and Evaporation of Modified Hayward Black Hole" (2015)

14
Could a rogue planet be the host of a planetary system?
9
How would humans and society react to a superhero existing and saving the earth?

9
What stellar number density would two galaxies have to have for another star to collide with the Sun during a galactic merger?
23
Close the door on your way out - Life lit by a blue dwarf star
15
How can I make a black dwarf star?
5
Explaining a Low-Mass Brown Dwarf
7
How soon does the Earth's surface re-solidify after the red-giant Sun is replaced with a different star?
11
What sets of stellar models are freely available for reference when worldbuilding?
27
Deflecting an incoming star, railgun style
8
Effects of magic on stellar evolution
2
Possible alternatives to nebulas as a celestial smokescreen
6
How plausible is my solar system?