What is a way I can use to store weapons?

I need to carry large weapons but I also need to be able to hide them when I'm not using them, then make them reappear when needed. The setting is pretty realistic.

The weapons are quite huge: a war scythe, 5 foot sized bows, etc. I need them to appear quickly and preferably silently.

IF you're looking at a tech version instead of magic, there is the Flat Space technology used in the Ultraviolet movie.

Quoted from the Wiki

Sometimes referred to as Flat Space technology, dimensional compression is used to store objects in a Pocket universe. Simple objects are stored/retrieved and more complex ones systematically deconstructed/reconstructed in a flow of sparkling lights. A significant number of items can be stored for easy retrieval without burdening the user with either weight or size. The technology mainly takes the form of easily overlooked wristbands, although 1 inch scabbards holding 42 inch swords are also seen. Handguns (some with 18 inch bayonets stored in their 6 inch grips), and ammunition are also hidden in this manner (the bullets flying from the wristbands into the magazines on command). The technology is also used to create habitable pocket dimensions, such as the briefcase/backpack used to transport the ten year old Six and the tractor trailer with the internal dimensions of a warehouse (containing Garth’s research laboratory and armory. Dimensional compression is the basis of one of the light hearted scenes in the movie. A security scanner checks Violet, saying “Number of weapons found:”, pauses shortly as Violet’s weapons are displayed, and says “many”, in an astonished voice, as it is unable to calculate the exact number. During the final battle, Vice Cardinal Ferdinand Daxus pulls out a sword from nowhere. This might be a result of editing, but judging by the size of Violet’s pocket dimensional wristbands, Daxus’s ring might have been a dimension container. Another option is that Daxus wore a wrist gauntlet similiar to Violet’s.

I'm going to answer your question, but I need to make a couple of assumptions. This is a good learning opportunity! As answerers, we don't want to make assumptions, it might mean we're not giving you the best answers. This will help you see the kind of details we need for your future questions.

I am going to have a bit of fun couching this in a backstory that obviously has nothing at all to do with your own story. You're certainly welcome to any ideas this might give you!

The Wizard Duormond created in the year 121 of the Antekin Uprising the Verdigris Bracers. Legend tells that they were created at the behest of the Potentate Ulquat who, having his greatest treasure, the Carab of Mynoah1 stolen, wanted a way to ensure a means of quickly taking posession of his greatest treasures.

The bracers were described by the historian Alfaecen as approximately five inches in length and six inches round, though always able to fit snugly to the forearm of any who bore them. Metalic in vision but supple to the touch, each had a dial on the inner-arm side about the size of a sand dollar and inlaid with five coloured gems. The bearer could touch the center of the dial and speak the word, Mechth! and the dial would rotate one position, always leaving one gem forward toward the thumb.

Alfaecen continues by explaining that the bracers were activiated by the intent of the bearer, but that intent had to be of strong will and need. With the right, the bearer would reach forward and a portal would open, permitting his hand entrance to the Chamber of Pyndrell. From the Chamber, the bearer would grab and draw forth whatever object had been joined with the bracer's gem. With the left the bearer could likewise take posession of another object, meaning ten objects in all were quickly available to the bearer. But, of great interest, is the apparent fact that the location of the portal is always before the hand. Thus, even if one's hand is behind one's back, the bearer could posesses that which is beyond the portal so long as a modest reach (the depth of the hand) is attainable.

Though the portal was never greater in size than the hand of the bearer, the captured item would always appear in its grandure when the closed fist grasping the object was pulled out of the portal, the portal would then close. The jester Yukedyc sings ballads of great warriors suddenly bearing ancestral swords and one, the Romance of Hasden and Leuonnia, tells of Hasden drawing roses from the air without number as he courts Leuonnia.

But, of the location of the Chamber of Pyndrell no one knows, though it is upon the land (Alfaecen assures us). It thus could be found by burglars or others with nefarious intent. Legends suggest it is also subject to the infrequent shaking of the ground, infusion of water, or other natural interference. Thus it requires periodic visits from the bearer to ensure items remain in place.2

Alfaecen continues by describing the Chamber: it is said to be no larger than a small room, with one entrance and space on the four walls for the ten items, whether leaned against the wall or set upon pedestals. Before each object stands a sconce bearing a dull, black stone and a coloured gem. Whether the gem was to the left of the dull, black stone or the right would determine which bracer would invoke the portal for that object. A brilliant diamond at the fore of the sconce identified the direction the portal would open, and thus had to point toward the object of desire.

Alas, Alfaecen concludes, the location of the Chamber has been lost to time. Bearers of the Verdigris Bracers can pull from the Chamber, and can place into the Chamber, through the portals — but the loss of the chamber itself has caused difficulty. It is known that the left bracer's ruby position now opens a portal into solid rock and the right bracer's lapis position no longer opens at all (it has been long speculated that the sconce must have fallen, disloging the stones). The floor cannot be seen through the portals and one can only imagine what wonders of treasure, might, and magic lay mere feet away from the bearer! Alas, unless discovered anew, none will ever know.

1 There is a possibility, suggested by the epic poem Fenningdyn that Ulquat really only wanted the ability to pet his cats when he wanted to, but a more legitimate claim can be made by the recently discovered journal of the burglar Jyk, who claims to have robbed Duormond of his belt whilst traveling through Laemis Vale, forcing him to walk the remainder of his two-week journey to Ruddton holding his pants up for lack of a spare. Jyk was laywaying people in that area at the time, as attested by the Sheriff of Laemis, and the bracers were known to be upon Duormond's arms two weeks later, lending strong credence to Jyk's tale. But who can trust a burglar?

2 If you're asking yourself, "you mean he could open the portal and get hosed down with water? Why would you even do that?" it's because I'm a believer that good stories use weaknesses to their advantage. All-powerful characters or items, or perfect processes and actions, make stories boring to me. Weaknesses are something that can be used to comedic effect, or to engage a more complex story line (like, "I can't use it in the spring, the chamber's always full of water!"). So, I can't help myself. People, places and things can't be utopic in my world.

While magic and magic-like technology seem to be accepted here, I think have a mundane solution that could work.

Pretend to be a traveling musician. 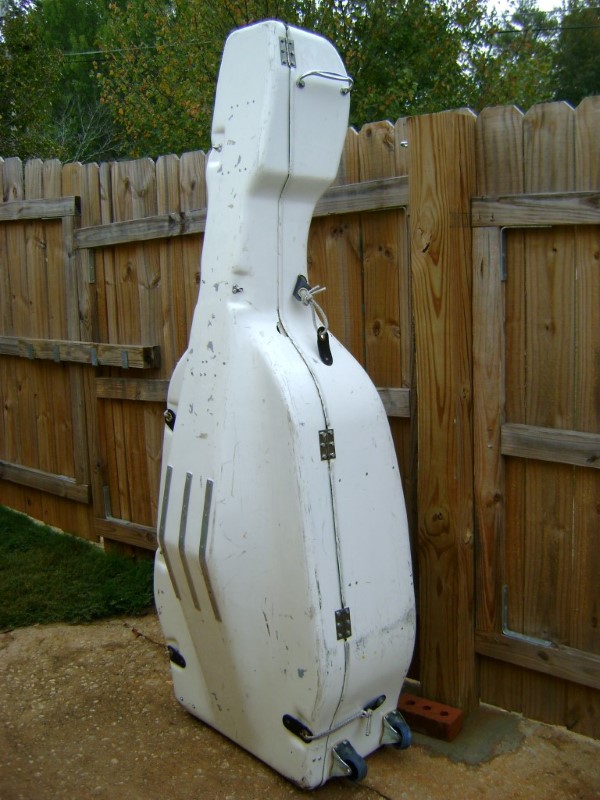 This is a carrying case for a double bass, the largest type of string instrument. You could probable store the entire kit of a five-man assault team in one of these bad boys and still have enough space to reinforce the case into a bulletproof shield.

You could probably fit a few strung warbows in here, not to mention a scythe if the blade can fold in for easier storage.

Instruments of this size have been around these the 15th century, so this will probably be permissible in whatever setting you have planned. As a bonus, this gives the wielder a reason to wear nice suits and look kempt. Gotta look like a person who gets paid to perform, after all.

Just to round up the answers, I need to mention Morph Weapon trope. Morph Weapon (sometimes called "Shapeshifting weapon", may be enabled via Weapon Transmutation superpower, or high-tech nature of this weapon) is the ability to instantly or nearly instantly turn one weapon into another. A character may carry an innocuous object, like empty jar, which, when needed, will turn into a big war scythe, or bow, or anything that is needed at the moment.

15
Weapons for Long-armed (Winged) Dragons?
11
Space weaponry?
132
Why would giant mechs use melee weapons?
3
How can I make the use of modern weapons and technology unreliable on a planet?
4
What are some practical weapons for slaying monsters?
7
Best weapon to be wielded by tentacled creatures?
14
What weapons would be used to kill giants by a viking era civilization?