Building a Base on the surface of a planet like Venus

I know living on Venus would be virtually impossible for us now. But I'm trying to picture what life would be like on the surface of such a world, and how advanced in technology a species would have to be in order to achieve it.

Whatever species is on Venus obviously didn't originate there, so this Venus like planet would be a colony of sorts. I am placing no limits at this point on how advanced this species could be, but they are either humans or humanoids.

If I wanted to build a base on the surface of a planet like Venus, with its thick, crushingly heavy corrosive atmosphere, intense heat and rivers of lava, what kind of technologies would I need?

I'm thinking the Venusian Base would be something like a large pressurized container with its own internal environment, that was strong enough to withstand the atmosphere. But I wonder if this is enough? How would people get in and out of the base? Would mining activities be possible from within the base?

Just building a base might even be possible with current technology, just incredibly expensive and very challenging from an engineering perspective.

Dealing with the pressure is in princple no different than for a submarine. It just requires a strong pressure hull. The surface temperature can be dealt with, 450°C isn't hospitable, but at least its not so hot that everything melts, so a base could be constructed using more or less common materials. Isolating the base is in principle no different than isolating a fridge to reduce heat transfer from the environment; just the scale is a little different. Its all technology we already posess, whats missing is just the engineering work to put it together. And a way to bring it to Venus XD.

Living on such a base would in many respects be similar to living in a submarine. Access to the outside is impossible, or at least if a pressure suit can be made it will be pretty cumbersome and heavy. More likely surface activities, if at all, would be restricted to using some kind of vehicle, probably resembling something in between a tank and a submarine. Deploying and retrieving the vehicle could work the same way as with an airlock, just that the high pressure is on the outside.

If any mining is done, it would most likely be all robotic. But considering that about anything you could possibly mine from Venus could be obtained much easier elsewhere, mining seems mostly pointless. A base could more believably be scientific, and mining be replaced by drilling to learn about geology... erm whatever the term for studying Venus rocks is.

There used to be a lot more science fiction about colonizing venus. That was until we actually sent probes there, took one look and decided, "You know what? Mars is actually pretty nice."

The surface is difficult. I imagine it would be a similar habitat that could survive under a kilometer of ocean inside a volcano. Very high pressure and very high temperature. We don't currently have any habitats that can even survive the pressure, 9.2 MPa. That's 90 times Earth atmosphere. The temperature is hot enough to melt lead, 462 °C. We would have to expend a lot of energy just to keep cool.

We'd have to bring everything for life. There is no water or molecular oxygen (though we might be able to scrub oxygen from the atmospheric $CO_2$).

One relatively neat thing for a base there is the Sun will set in the East. Venus rotates in the opposite direction on its axis than Earth. It wouldn't be totally obvious, since we achieve the same effect on Earth by confusing north and south. However, as boring as that is, it might be the neatest thing about living on the surface.

It's far more likely we'd have floating habitats. It's certainly much nicer up there, where the planet isn't trying to kill you. 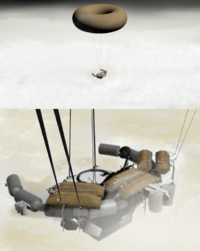 The atmosphere is dense enough that our normal breathing air could be stored in a massive bag and used as a lifting gas. A blimp that stores our breathing air is pretty cool. Once the floating habitat was set up we might make excursions to the surface. This method makes a lot of sense, it's what we do with the ocean.

So, exploring and colonizing Venus will almost certainly be from 50km up. Miners, or more likely miner robots, will make dives to the surface. But unless we terraform, humans or other fragile human like creatures, won't be living on the surface.

Personally I'd start exporting bacteria or similar to Venus right now who thrive on heat and pressure, and who consume carbon dioxide and methane and excrete solid carbon in a useful form. The more carbon we can strip out of the Venusian atmosphere, and sequester in its surface, the faster it will cool down. Frankly we could use such bacteria here on earth, so long as we were assured that they wouldn't mutate into something that wiped us or our life-supporting ecosystem out.

In that regard, Venus is a great lab for such experiments. It might take ages to cool it down to habitable levels - can someone run some numbers? - but it would be handy to have a backup planet in the same neighbourhood if it is at all possible. And even if we don't manage to get a habitable planet out of it, maybe we'll get some useful science from it.

Not the answer you're looking for? Browse other questions tagged science-based planets colonization or ask your own question.

1
How could we (modern humans) colonize a hot planet?

6
Postapocalyptic, Venus-like planetary atmosphere
3
What would the consequences be if there was a planet other than Earth, Venus, or Mars that was in the habitable zone?
24
What is the feasibility of a floating city on Venus?
9
What is the color of Venusian sky 50km from surface
4
How Can I Get Giant Trees on Venus?
4
Geography of a Super Venus
6
How long would an array of mass drivers take to terraform Mars by transporting CO2 from Venus?
0
What if Genetically Adapted Humans Colonizing the Atmosphere of Venus Ended Up Competing with a Previously Unknown Life?