A cure for the 'Kessler Syndrome'? [duplicate]

Let’s say that tomorrow, NASA scientists calculate that nearly every installation in LEO (ex. communications and military satellites, the ISS) will be rendered inoperable by an expanding debris field within two weeks. Within this timeframe, how should they best prepare? How would they ‘cure’ the debris field, if a ‘cure’ is even possible? And finally, will such a ‘cure’ even be possible in the inevitable panic following the loss of the world’s communications technology?

If you were to send up a large rocket with a bucket-like attachment on top, it could orbit slightly slower than any space junk and catch it. Then it could fire its rockets and drop below orbit velocity so all of the trash it had collected would burn up in the atmosphere. If you add a power source, you could have a giant magnet instead.

This is not a full solution and would be very expensive, but a few of these rockets could help protect existing satellites from being destroyed by clearing the debris field approaching them.

Another option is a spaceship that can run on space junk. That would have the bonus of requiring less fuel to bring to space because it could get the fuel it needed from the space junk.

You could have nanobots in space to eat up all of that junk if you wanted. 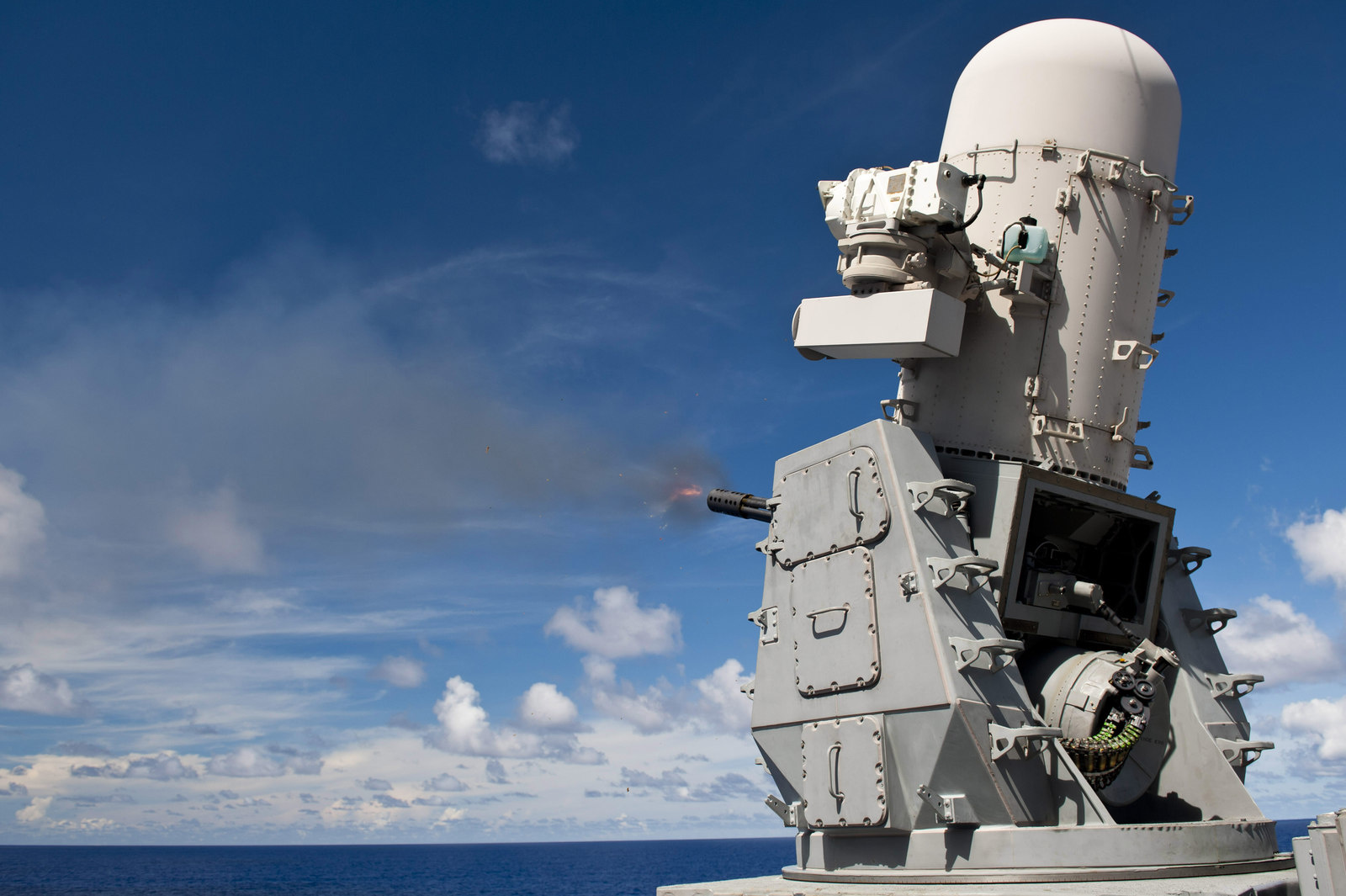 The basis of the system is the 20 mm M61 Vulcan Gatling gun autocannon, used since 1959 by the United States military on various tactical aircraft, linked to a Ku-band radar system for acquiring and tracking targets. This proven system was combined with a purpose-made mounting, capable of fast elevation and traverse speeds, to track incoming targets. An entirely self-contained unit, the mounting houses the gun, an automated fire-control system and all other major components, enabling it to automatically search for, detect, track, engage, and confirm kills using its computer-controlled radar system. Due to this self-contained nature, Phalanx is ideal for support ships, which lack integrated targeting systems and generally have limited sensors.

Phalanx autocannons are mature technology. They track incoming projectiles with radar and then destroy them with a barrage of bullets. You would need to tweak the aiming algorithm for space conditions but it is easier in space - no air resistance and no wind. Radar works better in space than on land. Incoming fragments will have huge radar profiles and will be obvious many km out. These fragments will be fast, but not asteroid fast because if they were they would leave orbit. That is well within the ability of Phalanx to see and destroy.

In your scenario you have some notice. These Phalanx systems are ready to go. Tweak them for space and send them up in satellites or old shuttles or whatever you have got. When the phalanx bot detects incoming that matches the profile of space junk, it shoots it. If the thing is hit, it slows, and if it slows, it drops out of orbit. I could imagine that with the sort of lead time the bot will have in space, it might take more of a sniper approach than the "wall of lead" - 1 shot at a time, assess for a hit, then take another shot if target not hit.

With more time you could outfit the Phalanx with lasers, which would sidestep issues of ammo and also the possibility that spent bullets themselves might be a threat. Vaporizing an incoming target will cause it to become an expanding cloud, with less kinetic punch if it hits.

If calculations show that spent bullets might actually be problematic, make them out of ice or plastic or frozen mercury - things which will not persist long.

The Kessler Syndrome dispels belief so drastically that, well, the answer might just as well too.

Launch huge expandy-foamy-sticky-slime balls into earth orbit. Once in orbit, the balls would expand into gigantic foam sticky balls (made mostly of empty bubbles), maybe a few km.s in diameter. They would sweep their orbits, with all of the space debris sticking to them and becoming embedded by fibrous sticky strands that make up the foam. Eventually, the balls would accumulate so much junk inside of them, that they would become really, really heavy. They would drop out of orbit, and descend to earth. They would, of course, then burn up, taking their accumulated load of space junk with them into a fiery oblivion.

The issues that the mythology behind the Kessler Syndrome does not address is that these collisions are fission, not fusion. That is, the particles get increasingly smaller, not bigger. It is a self-limiting phenomena. Eventuality, the orbit is filled with very tiny, but very numerous, survivable particles. The second issue is that, every collision results in either a loss of velocity, or an increase in velocity. Overall, the net energy of the particles decreases. The orbits become increasingly unstable, and are erratic. The particles will have their descent into the atmosphere quickened. Third, the calculations of the energy of impact all assume that the particles end up with zero velocity, whatever that means. Particles that go right through, are defected, or just glance off do not produce anywhere near the 'released energies' quoted. Fourth, the premise ignores that fact that satellites are now 'hardened' against expected impacts. They are able to absorb the impact energies. And lastly, the problem is minuscule compared to how much space junk hits earth.

60 Tons Of Cosmic Dust Fall To Earth Every Day

The problem is analogous to the 'Y2K' problem that was hyped at the turn of the century. It had some factual merit, but please, airplanes falling out of the sky on Jan.1,2000? Over-hyped by far.

What is missing from the question, especially for it to be science-based, or even hard science, are any criteria. So, here are a few potential criteria. The solution, of course, could not make the problem worse, by producing even more stuff. Second, the solution would have to be capable of handling or dissipating the potential and kinetic energy of any 'captured' particle, so that no further destruction or damage is done. Third, by far the greatest problem is junk that is smaller than one cm. Any solution that does not handle this should be a non-starter. And fourthly, the solution should be compliant with existing knowledge and information about the problem.

The mean number of fragmentations per year accounts to 4.9 (SD = 2.8) with no sign of regression or fundamental change. However, there was a slight decrease in fragmentations for three years after the introduction of the Inter-Agency Space Debris Coordination Committee (IADC) Space Debris Mitigation Guidelines in 2010. An examination of the fragmented mass over the years is shown in Figure 2b. It is shown that most of the objects that experienced a breakup had a mass less than 500 kg. Looking at the other extreme of the histogram, there are two events with a fragmentation mass of 26,000 kg and 30,000 kg. These events happened in the late 1960s during the Apollo program, but, due to their low event altitude of below 300 kg, almost all fragments re-entered into Earth’s atmosphere and consequently do not contribute to the space debris environment in the long term.

So a huge ball of space foam would be ideal for trapping these small particles. The volume would be great enough to cause slow deceleration, any small particles that were released would also be trapped, the ball is big enough to be visible, and thus not a navigation hazard, and it is self-healing. Larger particles would just blow through it, and the gap would close.

However, such a material and such a method does not currently exist. The foam could never 'solidify', as it would then be subject to fracturing and thus contributing to the problem. The foam would also have to be sticky, and it would also have to consist of long polymers, such that they would bind and hold together, but also be able to slide along each other, so as to absorb the collision energy. Thus, the answer is just as conjectural as the question.

Not the answer you're looking for? Browse other questions tagged science-based orbital-mechanics satellites kessler-syndrome .