How effective would an iron sulphide carapace be at resisting small-arms gunfire?

I've been designing a race of humanoids with a thick chitinous arthropodal carapace resilient to small-calibre gunfire and physical trauma that would cripple a normal human being. This carapace is similar to that of the Iron Snail's, which has a tri-layered shell protecting the snail from predators and the extreme environment it lives in. The inner layer of their shell is made of aragonite, a form of calcium carbonate commonly found both in the shells of molluscs and in various corals. This helps dissipate heat, saving the snail from a slow, volcanic-induced simmer.

The middle layer is equivalent to the organic outer layer also found in other gastropods, and is also the thickest of the three. This layer appears to act as padding absorb the mechanical strain and energy generated by a squeezing attack making the shell much tougher, and harder to break.

But most impressive of all is the outer layer. It is made of iron sulphides, in particular pyrite and greigite (which range from 6-6.5 and 4-4.5 on the Mohs scale hardness). Greigite nanoparticles covering the outer shell mainly serve as a shock absorbent. When the snail’s shell is subjected to a high pressure, the shell cracks around the particles, absorbing energy and blunting and deforming the predators’ claws. The shell thus becomes littered with thousands of microcracks that not only absorb the shock, but also prevent large cracks from forming on the shell which would have been fatal for the snail.

So, when everything is said and done, how effective would this carapace be at stopping small-calibre bullets and how would it fare against high-calibre gunfire?

I think the answer is "Very effective". The animal you really want to have a look at for this purpose is the Mantis Shrimp.

Here's the really critical bit: "Further inside, highly organized layers of chitin fibers act as shock absorbers. The fibers are arranged in a helical structure to slow down the spreading of cracks. Here's the trick: the helix forces the cracks to constantly change direction, which disperses their energy and quickly stops them from propagating."

This link has less detail, but some cool videos.

"Scientists are already trying to harness the durability of oyster shells to develop bullet proof windshields of military vehicles, and now they’re turning to the mantis shrimp’s shell in designing the rest of the Humvee."

The carapace might be effective at stopping small caliber fire, but that is not enough to ensure survival. Shot thrown from a sling (one of the oldest weapons known to man) was quite capable of killing an armored human, without leaving a mark. The impact against the armor was sufficient to cause internal injuries to organs in close proximity to the impact site, particularly to the brain and got organs.

Edit This is an older article that discusses massive internal injuries without external bruising. examples incluse a 5 year old child who was run over by a hansom cab (horse drawn carriage), who died from severe contusion and laceration to the lungs, but there was no skin or rib injury, and the loser of an altercation who died after having most of his ribs fractured, and his heart ruptured, and his liver, stomach, kidneys, and spleen all being lacerated, but with no marks of violence visible except for a bruise and laceration on the scalp.

Is your carapace tougher than 3/8" thick steel plate?

5.56x45 M855 at 140 yards zips right through... Also, just how shatter proof can it get? IIRC from all the pyrite I've found it shatters pretty nicely. Can it withstand the energy being imparted onto such a small area? 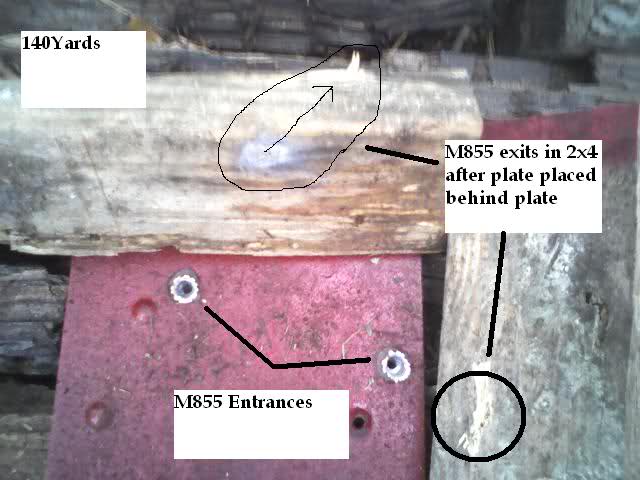 3
How would having a spherical carapace benefit an animal?
8
How would medieval combat differ if its arms and armour were refashioned today?
2
How would Fair Folk-type elves deal with dietary iron?
5
How would an EMP affect spacesuits (and small-arms weapons)?
12
How effective would a full set of plate armor be against wild animals found in temperate regions (bears, snakes, wolves)?
13
How effective would wooden scale armor be in a medieval setting?
12
How effective and viable would bronze full plate be?
4
Composite Organic Armor