Why weren't medieval city gates backed with a system that would turn the gate into a rubble filled wall?

Before gunpowder, one of the common ways to break a city is to break the gates. Since they have to be opened and closed they are intrinsically weaker than the wall itself.

There were various defences in place: Portcullises that could be dropped either in front or behind the main gate, a double passage that allowed materials like molten lead, or smoking hot oil to be dropped on the enemy. Overhangs, and wall projections that allowed the defenders to make life unpleasant for the attackers.

But once the exterior forces were able to get a decent ram up to the gate, the game seems to have been over.

The following possibility occurs to me:

Construct the wall around the gate with a serious notch on the inside of the passage through the wall.

Keep a set of timbers that fit this notch, that can be laid horizontally to span the space between the notches.

Keep a reserve of dry earth, sand, or gravel sufficient to fill the space between the timbers and the gate.

One it's obvious that the enemy will get a ram near the gate, put the timbers in place and fill.

Filling could be made faster if the fill was located at the same level or higher than the top of the gate. This would allow wheelbarrows to be used

This would not be done casually, as taking it apart after would be time consuming.

I think this would have roughly the same strength as a stone face and rubble wall. The ram instead of breaking the gate timbers would half to grind the timbers to splinters. With each thump of the ram, the fill would settle and be a better backing.

Is this workable in a pre-gunpowder, muscle and water power world? 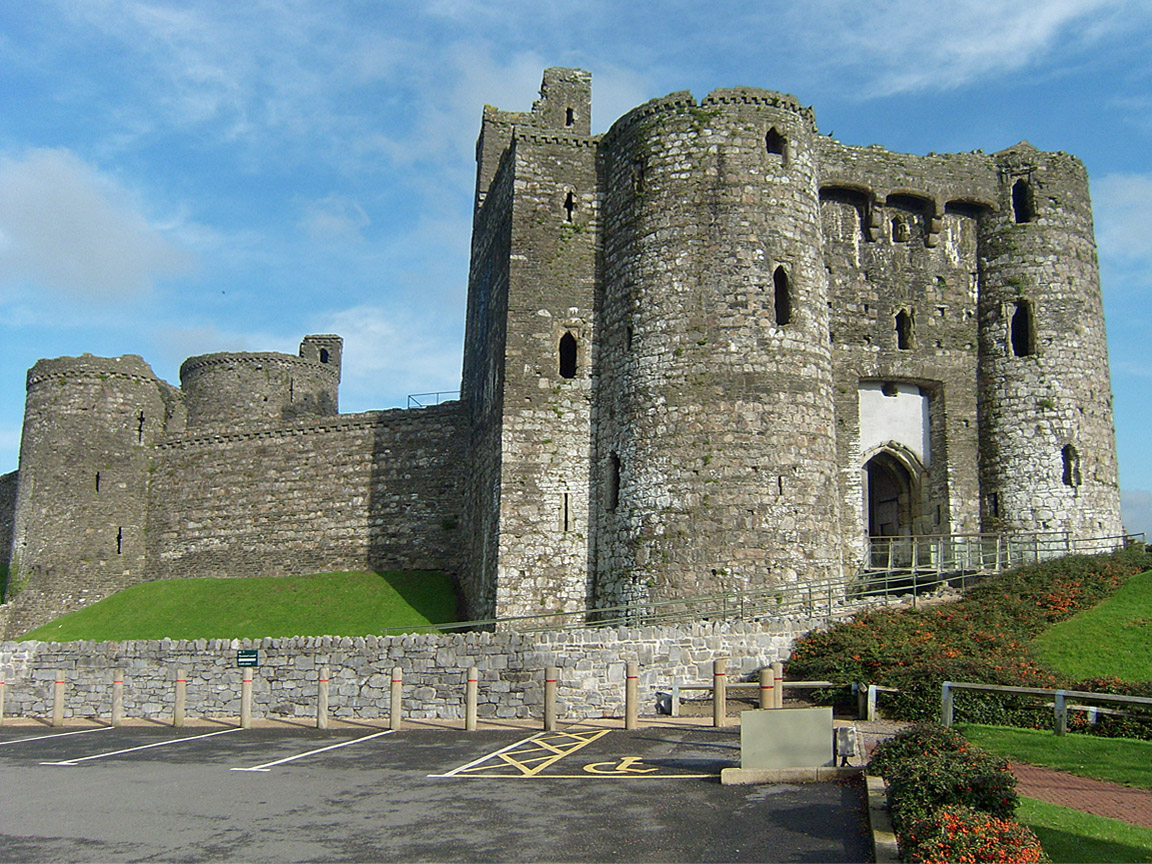 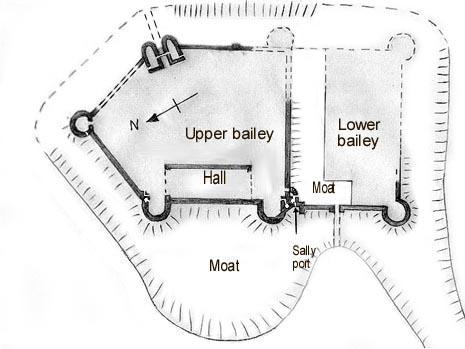 Ruthin Castle plan. The two towers in the North West corner are the gatehouse, while the marked sally port is opposite to it

While there is nothing in principle to prevent you from filling the space behind the gate with rubble to stop a forced entry, this is hardly an optimal solution to the problem and seriously restricts the defenders options. It also really does nothing about miners tunnelling under the foundations, or preventing normal siege engines from breaching the curtain walls, or preventing the use of ladders to scale the walls. You would spend a lot of time and effort to prevent something which has a low probability of happening.

A mechanism for permanently closing a gate in a castle wall would consume precious resources and space which would be better used on food goods and other supplies to survive the siege. It is much more likely that an enemy will simply surround your castle and starve you out, than that they will spend lives and equipment trying to breach your gates.

After all, if they break your gate down now, then later, after you have starved and the castle is theirs, they will have to fix it. Better to let you slowly die behind your pristine walls, then scale the undefended walls, unlock the front door and let the cleaning crews inside to remove your corpses.

Unless you give them a good reason to hurry (like an oncoming Russian winter), they will leave your gate undamaged regardless of what nasty mechanisms your build to reinforce it.

As other answers point out it was well known that a gate was a weak point in castle architecture, however, just because it is easier to break down a gate than break down a wall doesn't mean it is an efficient use of an army. Gatehouses were incredibly well fortified with projecting flanking towers, portcullises, machicolations and murder holes that made direct assaults on gatehouses very costly. Also keep in mind that defense for medieval castles often meant defense in layers. You have an inner and outer gate on your gatehouses, you often have more than one gatehouse and you have a central keep and if well designed you can have tight corners in front of gatehouses to make maneuvering siege engines like rams up to a gate very difficult.
All that in mind the cost of using extra materials to seal yourself inside your castle is not a good idea as you are then foregoing the benefit of having those layers of defense and instead forcing yourself into a siege situation where you have limited resources inside the castle and are at the mercy of the enemy sitting outside the castle, at the point you are sealed in you wouldn't even be able to have your defenders join with an ally if help were to arrive.

Show me the evidence of sieges breaking in through the gate

I went through a great number of historical sieges, and I couldn't find a single one where the assault on a gate of a stone walled fortress was successful.

The closest I could find was the Last Siege of Constantinople, but that city had its walls partially destroyed by cannon fire and was generally assaulted by some 50,000 men. So while the gates fell in the assault, it's hard to pin the failure on the gates; especially since the first breach was elsewhere.

So, unless you can demonstrate that Medieval gates were actually a weak point, the answer to your question is that stone gates didn't need to be reinforced with anything else because they were already effectively impregnable.

Not the answer you're looking for? Browse other questions tagged internal-consistency medieval engineering siege .