World in drought - How long does it take for a forest to die without water?

In my world a powerful earthquake produces an opening in the tectonic plates and changes the geography of an entire continent. Most of the great rivers deviate from their courses or disappear, leaving huge cities without easy access to water.

My story takes place in a city that has a forest of pine trees nearby, a river crosses the forest passing by the side of the city. It is a forest of many kilometers long and abundant wildlife.

How soon would we appreciate the death or drought of a forest like this?

I've reviewed some news on the Internet about problems with forests that have been affected by climate change, such as the Black Forest in Germany or the Tropical Forest in Colombia. Some have lost certain plant species that require more moisture or are not able to adapt to certain temperatures. However, no forest has completely lost its water sources, so finding a point relatively close to what would actually happen is quite complicated.

It depends on the tree

In general, there exist plenty of trees that can do just fine in drought conditions, including many varieties of pine. So it only matters whether or not the trees in your forest are the right ones to survive the drought.

As a general rule, trees that survive drought have adaptations that trade growth rate for drought-resistance. Same applies to trees that survive cold, flooding, fire, etc. Therefore if you don't have any of those conditions, trees that are adapted for maximum growth tend to take over.

Examples from US trees would include the tulip tree and white pine. These are probably the two biggest trees in the Eastern US, and neither is adapted for extreme cold, drought, fire, or flooding. These trees will (given 500 years of non-human intervention) become the dominant trees in most areas where none of those factors are significant. Extreme cold favors trees that are more cold hardy, like sugar maple and elm. Fire favors oak and pine. Flooding favors tupelo and baldcypress.

Now drought is something of a special case here, at least in the Eastern US. Everywhere in the Eastern US is pretty rainy, but not all soils are created equal. Sandy soils tend to not hold water very well, and so whereas three weeks without rain on heavy clay and loam doesn't affect soil moisture much, three weeks in blistering south Georgia heat ontop of sandy soil can leave the group parched. Which trees specialize in these dry soil conditions? Pines, like the longleaf and slash pine. Now drought also tends to go hand in hand with fire (dry things burn), so these sandy soil pines of the US Southeast are also all pretty fire resistant.

Temperature and latitude matters, too

I talk about the the Southeast US, but your temperatures are very moderate. 19 C is the average temperature in Atlanta, GA in May or October. Summers are much hotter (25-27 C). The lower the temperature, the lower the evapotranspiration of water. Generally, pines don't transpire very much, compared to other trees, since they have thin needles instead of broad leaves. At these cool temperatures, a pine tree wouldn't lose too much water, and might make it a long time in drought conditions.

Similarly, latitude matters as well. Solar energy depends on angle to the sun, so the sun in the tropics drives much more evapotranspiration than it does in temperate zones. Your low temperature (19 C) implies that your land might be farther north, in a European-ish clime. In that case, with low solar energy hitting the pine needles, your pine trees might make it a while.

Soil type and structure would be controlling

So we have determined that a pine tree is pretty much the best pine tree for your circumstances. The last thing to investigate is soil type. Clay and loam soils retain a lot of water, sandy soils do not. Pine trees generally do not grow on loamy soils, since hardwoods can grow faster. But lets suppose you have sandy soil over clay. A hard clay pan will retain groundwater for months from previous sources, and some pines have deep taproots that can take advantage of this. Meanwhile, the sandy top-soil would have allowed the pine forest to form in the first place, to the exclusion of its competitors (and also helps explain why the soil wasn't cleared for farming!).

With just the right structure of the soil, and the right type of pine tree, a six month total drought might be survivable. Pines in drought will shed their needles, so you would expect them to drop most of their lower needles in the dry season and retain only a few green tufts at the top. When the rains come again, they will use their deep taproot to soak up lots of moisture, and hopefully the ground can maintain sufficient groudwater throughout the year.

Your forest will probably thin out considerable, as only the strong trees survive. You would end up with a pine savanna, with plenty of sunlight reaching the ground, and during the rainy season, plenty of grass growing. Something like this: 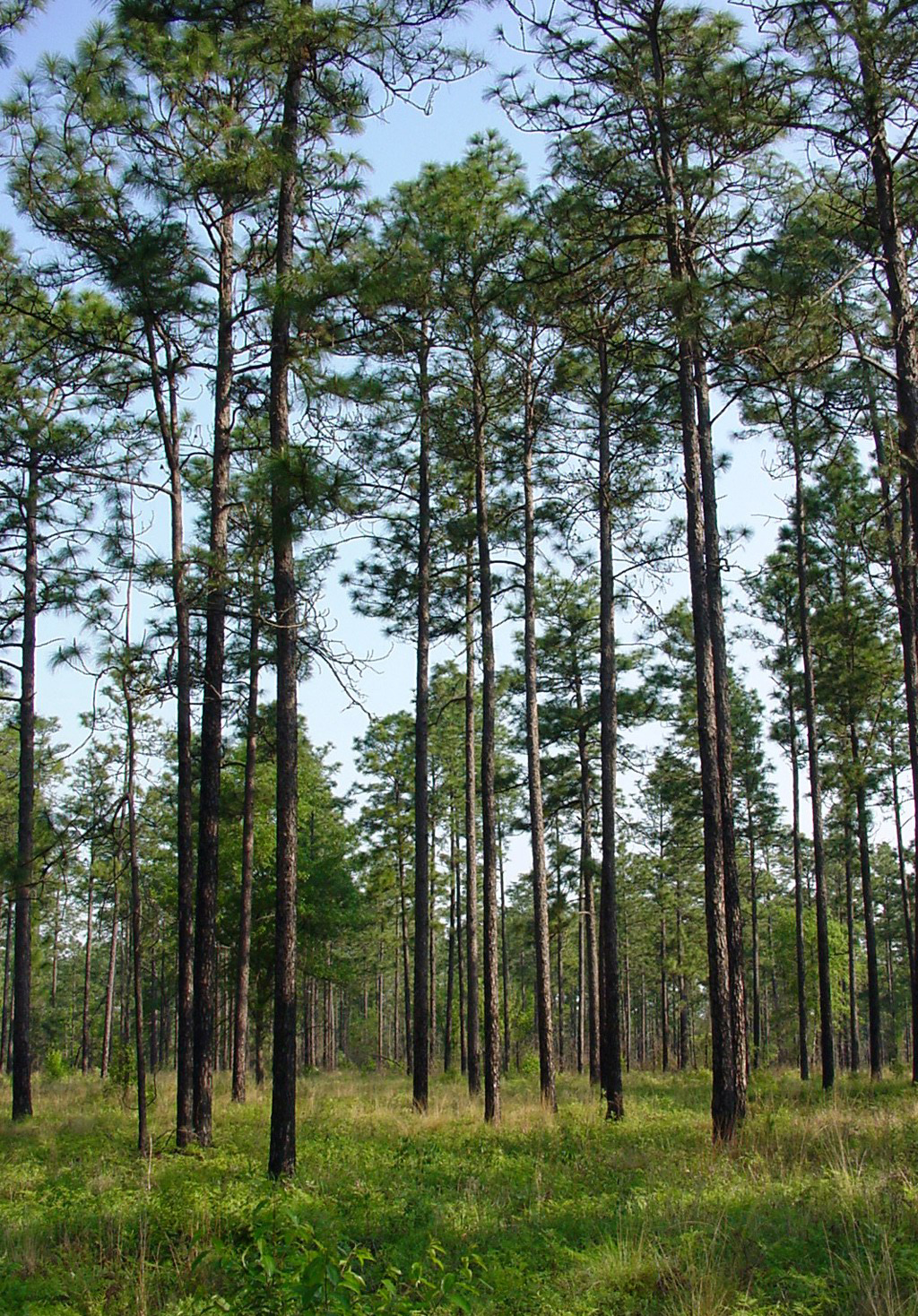 However, no forest has completely lost its water sources

If you don't want to rebuild the Amazon rain forest, there are very few forests that completely rely on a river as primary water source. It's mainly the rain that waters vast areas of forest, keeping the soil moist several meters deep and recharging ground water.

The quality of the soil has extreme effects on the ability to retain water. Pure sand dries out within days or weeks at most. Sandy soil can support plants for about 2 - 3 months (based on recent experiences in Germany) until it's dried out several meters deep. Rich, compact humus might retain water 4 - 5 months in its depth.

The next factor is the depth of ground water. If the trees can reach ground water with their roots, they might survive a year or even several years without any rain, depending on the amount of water available. Granted, all grass and bushes will be dried out by then, but the trees themselves might still be alive.

So if the weather is not affected too much by the recent tectonic activity, the forest would most likely survive the next years. Maybe there will be a long decline stretched over several years, maybe even decades as the increasing draught causes stress in old trees and makes it hard for seedlings to survive.

Not the answer you're looking for? Browse other questions tagged water earthquake or ask your own question.

27
How would the world be different if ice was denser than water?
48
(How) can I provide reliable water sources in a world of flying islands?
15
Can a house cut off from the world still have water for a short time?
9
How to get rid of human waste without using bodies of water
8
Water planet turns into desert world without being rendered uninhabitable
6
How long would it take for water vapor from an ocean asteroid impact to rain back down?