What gravitational impact would moving Jupiter to the inner solar system have on the outer?

Based on my recent series of questions: here and here.

The giant known as Jupiter has moved to the inner Solar System and Earth and Mars have become it's moons (despite all the odds). The moon of the Earth will be ejected after a short stay in the Jupiter system and it will settle in the asteroid belt. My question is this: Assuming that Jupiter is in the Goldilocks zone what would the gravitational effects on the outer solar system be?

Awesome question, because A) It's a cool idea and B) We know just what will happen.

The principle here is planetary migration. This phenomenon is common in many planetary systems. During planetary migration, a planet interacts with either a protoplanetary disk or planeteimsals. There are different ways that planetary migration can occur, but the most common one for gas giants is Type II migration, where gas and dust from the disk fill in an empty band clearer by the giant planet. This causes a transfer of angular momentum, and the planet moves inward.

This happened in the early stages of the Solar System, as per the Nice model.1 Interactions with objects near where the Kuiper Belt would be changed the orbits of the outer gas giants, while other resonances (between orbits, e.g. 2:1 or 5:3) pushed Saturn, Uranus and Neptune outward.

Also see this image, from another paper (found here): 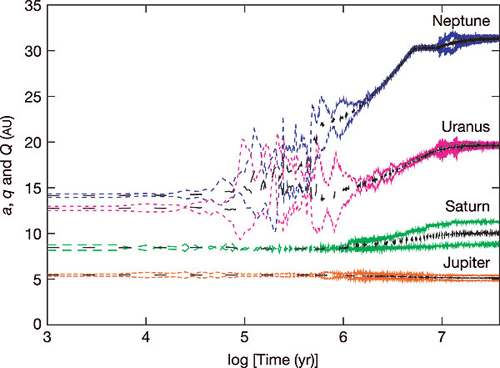 Note that Uranus and Neptune were drastically affected, while Saturn and Jupiter were not. In your case, the reverse is true.

Here's a YouTube video simulating it. Pay close attention at around 0:33.

Okay, so what happened here? Well, quite a lot of things:

We have to choose a mechanism for this to happen. Let's say that there has been some interaction between Jupiter and one of the other gas giants (most likely Saturn).2 What could have caused this? At the present day, the protoplanetary disk is effectively gone. Jupiter inhabits a stable orbit, where it has been the "vacuum cleaner" of the solar system for millions of years.

I hate to postulate some outside influence - a rogue planet streaking through the Solar System, or a hidden companion to the Sun (which doesn't exist; see also here), so I suppose we'll have to modify the conditions just a tad bit.

The first paper on the Nice model (all three are given in my footnotes) states that Jupiter and Saturn's orbits entered a 1:2 resonance, which then caused their orbits to become eccentric, thereby knocking out Uranus and Neptune. Looking at the image given above, though, they eventually settled down, while Uranus and Neptune bore the brunt of change. Let's reverse that and put Uranus and Neptune in a resonance.

So what caused that? Umm . . . again, that's tough to explain. I can only speculate here. You could imagine that two of Neptune's moons collide, but that wouldn't have much of an impact (pun intended). Pluto and Neptune will never collide (which also wouldn't affect Neptune). If you're okay with really stretching the envelope, you could claim that orbital decay manages to bring Neptune and Uranus close enough for something to happen. That typically doesn't affect planetary orbits though.

Ugh. I can't seem to justify any of this happening. Screw it; I'll discuss the effects, which is want you really want.

So if Jupiter's migration is caused by an orbital resonance between Uranus and Neptune, then we know right off the bat that those two will be semi-drastically affected. They could either be stabilized of unstabilized. Laying that math aside, you could postulate that, in some weird really-unlikely-worst-case scenario, one of them is ejected from the Solar System. I have no idea what effect that would have on the other, but it could be pretty bad.

I discussed a few things earlier that happened during planetary migration in our solar system. These could all happen here, too, especially given that Jupiter would have to cross the asteroid belt. That could be really, really bad.

More to come later, as I sort of have to go.

1The papers proposing it can be found here, here and here.
2Given that Earth's moon has already formed by now, conditions are most likely similar to today's.

Not the answer you're looking for? Browse other questions tagged science-based gravity orbital-mechanics gas-giants .

20
Creating a realistic world(s) map - planetary systems
3
What would happen to the moon if the Earth was captured by Jupiter?
5
How to enter the orbit of a gas giant?

40
Habitable moon of a gas giant: working out the sizes and distances
3
What would happen to the moon if the Earth was captured by Jupiter?
3
Maximum amount of habitable moons possible around this Jovian planet?
1
How would a solar system of solar systems work?
5
Could this work? How to? Terraformed gas-giant
37
Can we build a world in 1,000 years?
9
Habitable environment on a big moon of a gas giant lacking magnetosphere
12
Horseshoe Orbits
2
Does this F-star solar system make sense?