Could the Library of Alexandria have survived until today?

The Royal Library of Alexandria was one of the greatest library of the ancient world. However it was destroyed during the 3rd century after years of decline.

Was such a library doomed to destruction sooner or later or could it have survived, with a bit of luck, until today ?

To be clear, I am more interested in the content of the library (i.e., the papyrus scrolls) than the building in itself.

Depends on what you define as "survive".

There are buildings that survive centuries realively intact, even better if they are maintained over time. So there is a possibility of the walls and roofs "surviving".

As for the content, there are literally tens of thousands of clay tablets with cuneiform stored in hundreds of museums. A lot of them were once stored in the Library of Alexandria. Interestingly, the devastating fire that ultimately destroyed the library burned many of these tablets, hardening them and making them more likely to survive intact.

Most scripts were written on papyrus scrolls that would have decomposed under any less than perfect conditions. These conditions can only be achieved by completely sealing the papyri in an airtight container and never opening it again. Keeping content sealed is not exactly what you expect from a library, so it wouldn't have happened.

Since a papyrus scroll wouldn't stay intact forever, you would need to transcribe old scrolls onto new ones. With an estimated 40,000 to 400,000 scrolls stored in the library, you would need an army of scribes to constantly renew scrolls. Add in the fact that language and script change over time. There's the risk that a scribe simply couldn't read or understand a scroll written 300 years ago.

And then there's the content. Society, science and philosophy change over time. Transcribing a papyrus scroll is very time intense, so why would you transcribe a scroll that is hopelessly outdated if you could make your own name by writing your own book / scrolls?

All that is presuming the society at large is very stable and wealthy and in a time of peace.

Over such a long time, there are too many warlords wanting to burn down this symbol of his enemy just to make a statement. A state in financial need cannot employ hundreds of scribes to transfer squiggles and lines from one scroll to another. Natural catastrophes don't stop at the front door of a library.

To sum it up, the Royal Library of Alexandria could have survived as a building, but it's content wouldn't have.

Other answers have focused on the building of the Great library. I will focus on the contents (scrolls, etc.) and the institution (scholars, a centre of learning, etc.). I will assume that taking measures for the preservation of the contents of the library (copying of degraded scrolls etc.) are part of its normal operation. Decay of the material as a possible threat has been discussed in another answer by YElm; allowing this to happen could be a consequence of the failure of the institution as a result of lack of funding, political support, or scholars.

Threats to the continued existence of the contents of the library:

The cumulative likelihood of each of these threats materializing at some point rises with time. Specifically for Alexandria in OTL:

I understand that this is an alternate reality question, but the series of events in OTL may serve as some guidance. All in all, I would say the chances of the library surviving over 2000 years from ancient to modern times are pretty slim. Even abstracting from that concrete example, it would be very very difficult to find an example in OTL where some institution has been mostly stable over that time span at any time in history anywhere on earth. (Perhaps the papacy in Rome gets close, but note that there was quite a bit of turmoil between 400 and 700 CE that changed the face of the city, probably also the structure of the institution of the papacy completely. Possible the rule of the Pharaoh in ancient Egypt and maybe some temple structures in Egypt and the middle East may also get close. But this may have been due to lack of technological progress and overwhelming strength of city fortifications compared to siege technology with contemporary technology.)

In reality, most structures in particular ancient ones, are destroyed. Some causes are well-known: dilapidation, fires or conflict - however in actual fact almost all the cases are simply that they become replaced.

What keeps them intact or replaced is the populace - constantly rebuilding buildings. In fact, perfectly preserved ancient buildings are a rarity, an exception to the rule.

Aldo Rossi, a well-regarded scholar and architect, commented on this over time in his analysis of cities. In certain instances, you can see old remnants of structures become incorporated into modern cities - not as a part of the old structure but simply as a redevelopment into a new upgraded form.

As an example here is an old Roman arena in Lucca that has been converted over millennia into apartments: 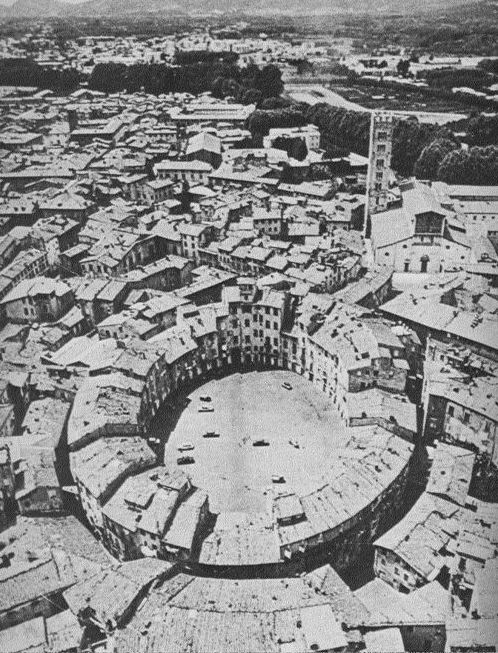 So unless the Library was significant economically or culturally, it would likely be replaced in the same manner when it was convenient. The odds are low, as it in fact it is normally forgotten buildings that ironically last.

Of course it could. It's a pretty simple problem, it just requires stability.

The Library of Alexandria was hardly unique, and had a lot of competition , even in its own day and in its own region. Most of these libraries declined along with the wealth and power of the rules/governments/societies that created them.

All you'd need to do to keep the library intact would be to alter history such that there was no decline in wealth and power. It's all about stability, really. Things like libraries get destroyed either on purpose or accidentally as a result of strife between nations. Two thousand years of history involves a LOT of authorities coming and going.

If you create an alternate history where, for whatever reason, there was a lot less warfare, where the centers of power in Egypt, Greece, and Rome never declined, or that their decline and replacement by others was more gradual and less militant, then by extension the libraries would survive also.

Not the answer you're looking for? Browse other questions tagged reality-check alternate-history ancient-history or ask your own question.

10
The Rollercoasters of Ancient Egypt
2
The Printing Press of Alexandria
8
How can a pre-modern culture survive a sustained invasion accompanied by epidemics?
16
Could Catholicism have survived as the dominant religion in England if it had allowed aristocratic polygamy?
27
How can I get a library to be seen as neutral territory?
12
Is it realistic for a town to completely disappear overnight without a major crisis and massive cultural/historical impacts?
13
I want to build a weapon targeting Interstellar distances. How viable are railguns?