Disclaimer: This question, unlike my other tree related question, was brought about by pure whimsical daydreaming. I also threw the term "evolve" around a lot, I should clarify that what I asking is would it be feasible not if it would be likely.

Question: Could it be feasible for trees in a windy environment to evolve leaves like tethered kites? It would work by instead of having many small leaves they evolve to have one large leaf like a sail. Then the trunk would grow longer and thinner like a kite string, and the roots would evolve to have a more expansive network. Thus having the leaf catch air and "fly" to a higher altitude for more sun. Would this even work or is it just nonsense?

Well, we know from observation what trees look like that are subjected to harsh high winds that blow constantly:

If trees in this otherworld evolved in a windy atmosphere, then they would probably end up bent over like these venerable Ancients.

But, let's think a little out of the pine box:

Suppose that the trees in this world evolved within a normal atmosphere: occasional storms, occasional seasonal high winds, plenty of calm airs as well. Now let's suppose that in this region, high winds and storms and fires and so forth occur usually in the summer.

One strategy is to blossom and set seeds before the summer storms and fires rage. Plants that do this will be burnt by fire and their ashes and twigs will be swept away. This will leave the seeds already in the ground a happy place to spring up again next year and start all over again.

This is not a good strategy for trees, who live for many years. So I introduce the scarwood tree. Its wood is dense and sturdy (like a bristlecone's) and its bark grows thick and can slough off in layers when fire touches it, thus protecting the bark layers and wood underneath.

But the scarwood, rather than dropping seeds in the late spring, takes advantage of the high winds of summer by sending up long thin tendrils into the windy airs above the woodlands. These filaments grow up and out of the trees' flowers.

As the winds pick up, the filaments grow, and at the end of each is a kind of wing-like leaf, much like that of a maple's samara: 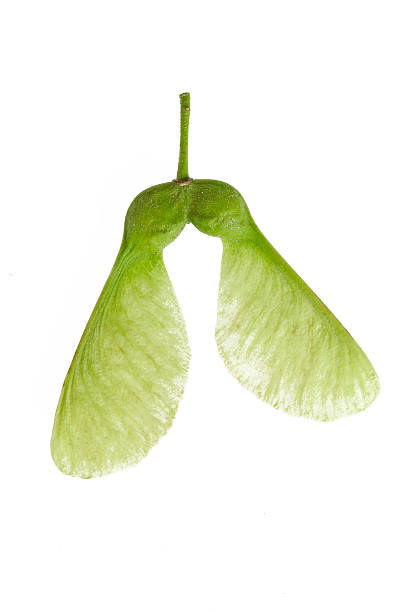 But the scarwood's seed has broad thin wings and flies like a kite high on the breeze! As the winds strengthen and the fires approach, the now matured seeds are released at the base of the filament. And they fly away on the wind to a safe distance from the fires, where eventually they'll land and sprout a new generation of scarwood.

That is to say: kite flower trees!

Such a species could plausibly live. I don't know if it could plausibly evolve naturally. It would have a trunk, containing a structure like a spooling station (I'm not endorsing this product, its just an example). As the wind picked up, the line would unspool and the kite would take off. This line could always be under some light tension so as the wind dies back down it would wind back up on the spool rather than falling down and getting knotted up. This would be useful for more than just collecting sunlight as well, you could have the tree's seeds be on the kites to be dispersed at altitude.

The biggest problem it would have evolving naturally is that the "spool" needs a wheel. This is a problem because they cannot really develop incrementally. A shape won't work at all as a wheel until it is already almost completely wheel-like. There is a reason we don't see any creatures in real life with freely-rotating body parts. Compare this with how sight evolved. Eyes started out as single cells that could detect light and shadow. Slowly, creatures evolved to have larger patches of them, and they evolved structures around them to focus light on them. You can see that they were the product of numerous, small improvements.

If these grew in a gorge or someplace where it is always windy, I could see it working.

Imagine a canyon with constant winds and little sunlight because of the canyon walls. Suddenly some seeds blow in from a small tree. A number of them grow, but tend to be stunted by the low levels of sunlight. Except for one that grew a bit lanky that constantly had its branches bent up towards the top of the canyon by the winds. This tree got more light and produced more seeds, and the weight of its seeds allowed them to fall to earth without being blown out of the canyon. Now lanky trees started to survive, with those growing taller and faster surviving best, until the trees resembled vines, latching to the ground with a great root system and rising into the sky using broad leaves that catch the wind.

And boom, kite trees. They only live in this one canyon/canyon system and will die off as the geography changes and the winds stop. Or they will adapt to have slightly bigger trunks and support themselves better, who knows. Life finds a way.

Addition: you could have a smaller version of this where the leaves grow on long string like stalks and have special shapes designed to catch wind. When the wind falls, the leaves hang down like on a weeping willow, but when the wind blows they catch the wind and fly behind and above the tree like a bunch of tiny kites.

What you're suggesting reminds me a lot of lily pads, which have long, thin stalks that allow the plant to receive sunlight from the water's surface while still allowing it to remain anchored in the submerged soil. In order for a plant like that to evolve on land, there would need to be something wrong with the atmosphere that would prevent it from getting enough sunlight at ground level, such as dense, opaque gasses that are much thinner at higher altitudes.

However, most plants instead get elevation by growing thick, tough trunks that are are able to support a large canopy of leaves to maximize their sunlight intake, but that requires a lot of time and resources to establish. So, in order to make your design more favorable than typical trees, you need to make your environment more favorable for a thin, quick-to-grow kite tree. Maybe the soil and/or rain in your world is very poor, so there aren't enough resources to support a forest of oaks, pines, etc. Or perhaps the kite trees are able to reproduce at a much faster rate and spread their seeds over a wider area -- such as with dandelions.

So, yes, it is absolutely possible for your kite trees to exist and thrive in such an environment; it just needs to benefit them in a way that no other tree can.

The problem is that when the wind falls below a certain level, the trunk won't be strong enough to hold up the tall tree with the big sail-leaves.

In a region where the wind constantly blows hard your tree might well be viable, but anywhere else it would -- as mentioned before -- fall over when the wind slows.

Alternatively to wind kites you could have plants that use electrostatic kites on calm days, similarly to how spiders use electrostatic propulsion to fly. Think of giant dandelion looking plants with string thin stalks that use electrostatic propulsion to lift the dandelion heads in calm weather. The bases could even generate an opposing electrostatic field to add to the lift. Also, strong magnetic fields or solar winds (both of which could be rather "constant" forces compared to wind) could be factors aiding in lift as well. In addition, these forces could even be food in addition to sunlight, generating electrical energy the plant could use for nutrient and energy synthesis (radiosynthesis, perhaps). It seems plausible that a plant may find an evolutionary advantage by floating past the magnetosphere of the planet (perhaps one with a small magnetosphere) and using solar wind in addition to sunlight.

Dependence on a single large leaf for photosynthesis is where the plausibility of this takes a tumble. Trees have thousands of cheaply grown leaves that can be replaced when damaged from predation or disease or animal activity, while your tree has just the one. A bad landing when the wind slows, a sudden gust that snaps the tether, disease, or predation, and the sole source of photosynthesis for the plant is compromised or lost entirely. It would then have to regrow, perhaps missing the rest of the growing season just catching up.

Another matter is the advantage of this line of evolution. Reliable wind wouldn't be it; wind doesn't block the sun. Competition blocks the sun, so getting as much height over rival trees would be the drive for greater and greater height and larger leaves. But no tree is an island: rival branches would pose an enormous danger to fragile kites, and other kite-trees in the area could entangle their lines, killing each other or just making the species less effective at gobbling up light over all as they spend so much time and resources in recovery from tangles and snagged leaves.

The problem with this idea is that trees take all the nutrients they need from the soil. In order to do so, they have mostly evolved to have roots that bind them very strongly to the ground, thus making them sessile.

You are suggesting a tree that can uproot itself and then plant itself again. It might be possible, but evolution probably didn't favor that on Earth because of the high cost of penetrating ground. Plants here only take to the wind in order to reproduce, such as seen with dandelion seeds and tumbleweeds.

Something similar to what you want evolved in water. Most species of seaweed float and don't have roots. They don't need to be hydrodynamic because water will drag them regardless of shape, and they float specifically to catch more sun.

Not the answer you're looking for? Browse other questions tagged science-based creature-design evolution flora or ask your own question.