What is a viable military strategy for a distantly disjoined country?

I am trying to piece together a world where a country has two territories. One territory is very far away from the other. Between the disjoined lands are long stretches of hostile enemy territory. Having distant territories is hardly a novel affair; the Romans, Persians and Ottomans boasted vast ones. However unlike many of such empires, the country in my world does not have a continuous slew of land. For a real world historical analog, we can look at the former state of East Pakistan: 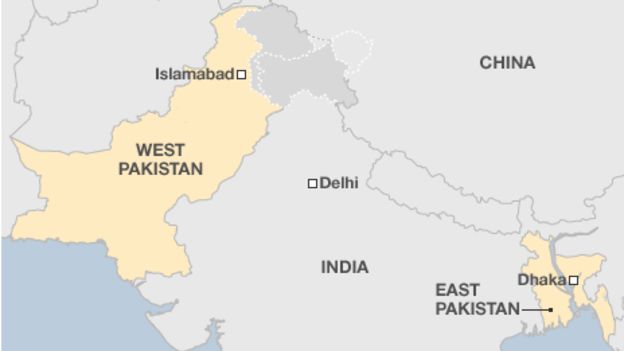 It is clear from the map that the territories would face numerous logistic and strategic complications. East Pakistan was almost 2000 miles away from West Pakistan, and it stands to reason that this geographic dimension added to the cultural and political turmoil that ultimately drove East and West Pakistan apart during the Bangladesh Liberation War.

East Pakistan is certainly a decent starting point, but is by no means the best case scenario for a distantly disjoined country. One could arguably assert that the military presence West Pakistan had in East Pakistan ultimately worked against them. Allegations of genocide along with other complications led to the demise of East Pakistan in less than 20 years. I would like my world's disjoined state to last much longer.

Question: What is a viable military strategy for a disjoined state to secure sovereignty in the long run?

Here are maps: [White = disjoined country] all other colors are hostile.

Play off blue against red. The parallel is Mongolia. 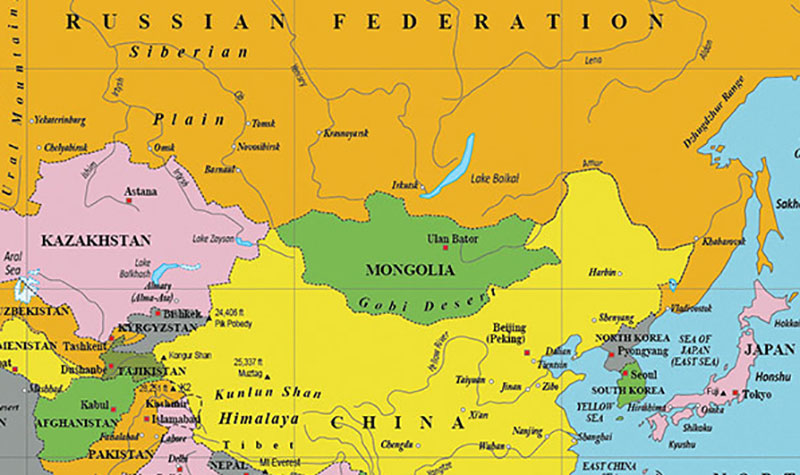 Mongolia is a landlocked buffer state between Russia and China, and before that between the USSR and China. It serves as a buffer, reducing the shared border between these two powers, curbing immigration and reducing tensions. Should one of the bordering powers make a move it would be seen as threatening to the other.

In modern days there is even more similarity to your situation: the involvement of a distant power (the US) in Mongolia bringing wealth and resources. Neither of the bordering powers mind this much as both see it facilitating the action of Mongolia as a buffer.

Although Mongolia would not act as a full buffer against China, it certainly reduces much of the border space and, as Chinese migration to eastern Russia is increasing, can reduce the uncertainty of illegal border crossing by Chinese migrants. In this sense, the U.S. pivot, and subsequent “employment” of Mongolia to contain China not only would make sense to Moscow but be welcomed by the Kremlin – if Washington will do the work that will ultimately benefit Russia, why should Russia complain? As long as there are active relations between Moscow and Ulaanbaatar, there is no tangible loss for Russia, merely a stronger border state that is increasing its security capacities and border security, while continuing to counter the large Chinese presence in the region.

White cannot ally with either blue or red. But blue and red are not allies either and it could plausibly serve their purposes to have a semiautonomous buffer between them. Its alliance with a distant power increases its utility as a buffer. This little pocket of white poses no threat and will not allow either red or blue to use its lands as a Launchpad for military action against the other.

To begin, even with rivers linking the isolated state to the sea and a powerful navy, if your tech is medieval, this does almost no good. Land based fortifications in presumably Red state will prevent any type of supply using strictly rivers. Even a simple (defended) chain across the river was used for centuries to deny adverse ship traffic.

Given your presented geographical constraints and military equality between the four states, I would say that there are three likely scenarios.

First, and most likely for short periods of time, Peace will break out. No country is in a militarily advantageous position to do much of anything (except as Demigan pointed out, maybe Blue to invade Isolated, given some other constraints).

Secondly, there will be periods of incrementalism in taking strategic territory. No one country can commit enough of its military strength against another country without some sort of tactical (incremental) or strategic (likely requiring something catastrophic to occur like widespread famine in one country) advantage. Maybe this is a military tech advancement which allows for force multiplication whereas Blue can divide its forces in such a way to invade say Orange but still maintain enough strength to defend against Red.

The likely third component of this cycle will ultimately be some sort of military/political pacts or economic drivers. You mention it has been tried, but that is the situation at the beginning of your very dynamic scenario. Open warfare such as in the second point will drive necessity towards finding another advantage to even the odds, and this often times means asking for help. Even if these aren't fully blown alliances, non-agression pacts or mutual attack strategies where land is taken in geographically dispersed regions and kept by the attacking force, can quickly eliminate or nullify one of the nations.

The above cycle will likely continue to play out, especially as technology advances unequally or catastrophic conditions create advantages for a well-placed and well-led side to exploit, allows it to.

If holding on to the Isolated territory is enough a priority, you will likely need to make some sort of pact with at least one of Red or Blue. Or make it worth their while, say economically, to not invade and allow your forces to safely pass. Hope won't prove to be much of a strategy here.

If you produce something unique to your peninsula which is needed by Red in their fight/defense against Blue, well, now you may have at least a bargaining chip for your relationship.

Since we're in Medieval, terrain based fortification will be quite effective. While you've indicated that the smaller state could not survive a prolonged confrontation, the fact that the fortifications exist is a deterrent to confrontation. Especially when there are multiple countries of roughly equal strength. This is because the military advantage in the conflict between 4 warring states will go to the one who is the last to enter into battle, as they will have the numerical advantage after others have suffered losses.

Encourage your people to have as many children as your production can support. Over time this will give you the best chance of success in the conflicts.

Not directly, but it'd be best if you tried to make the other countries think that your country has a secret alliance with another one (this should be considered as extremely likely since any two working together should be able to defeat the other two working independently). If they feel like their being baited into attacking, they probably won't.

If we discuss about war between countries over whole continent, it's more likely geo-politic strategy than pure war strategy. Let's look at the answers from Willk, ColonelPanic and Securiger (top at this moment). Both have paragraphs which related to geopolitics. Military maneuvers, army disposition, army structure and eventually war is only part of geopolitics. That's why my answer has little pure war options

When I see in the long run I render it as several decades, probably century. It's extremely hard to control distant anclave not only during the war. Taxes, governor, communications are problems. Even language and culture will differ. So why White should hold anclave?

The exchange could be not only by a treaty. White could evacuate all forces from anclave and conquer another territory which easy to defend

Sovereignty doesn't fall when first city has fallen. If anclave is just another province, then it's good idea to significantly reduce border line and abandon the anclave.

If there is some unique resoucre and/or other ultimate need (say, the capital and governor is situated in anclave) then Red and Blue would have more reasons to conquer anclave. In extreme White could be considered as colonial country where big south part is colony which could be reduced/abandoned and most of the army is situated in 'anclave'.

Losses during anclave conquest vs Benefits from it

If anclave is a mountain region which easy to defend and it has no rare resources then both Red and Blue could select another targets which easier to attack. At the same time, Red need some guarantiees that Blue doesn't attack through anclave like Germany attacked France through Belgium. That guarantiees make sure Red forgo from preventive attack just to build up defence line.

Sorry, this isn’t really a complete answer, but may lead to one - others please feel free to flesh out the historical details.

For historical examples, the most relevant would be to consider West Berlin. This lasted for 28 years, including 3 years of blockade. I suspect that key to the success of West Berlin was that the occupants strongly wanted to be identified with the West?

Also relevant is how the British empire and others sustained distant territories, though I think they would largely have had direct naval access?

White should encourage decentralization within Red. Some effective strategies are:

This will allow White to maintain a multiplicity of routes through Red for its merchants and nobles to travel back-and-forth between the parts of White.

In my eyes it could work if the border between blue and red and red and orange was made up by a river that eventually starts in the isolated territory. Since all of the neighbours are hostile towards the state and they didn't ally to crush the state, I would assume, that they are also hostile towards each other. This scenario would be quite similiar to the world I am building and I have .

The river doesn't flow through the territory of any of the neighbouring states it will be very hard for them to claim it for themselves and prevent a third party to use it, in example by building fortifications that control the river or start patroling it. This could be backed up by blue, that needs the river to actually get acces to the sea.

But the real question is, why does your state need the isolated territory? There needs to be a reason why the state is undergoing so much troubles just to hold a bit of land.

Not the answer you're looking for? Browse other questions tagged warfare military middle-ages or ask your own question.

6
Can a super-governmental military body like this work?
15
Modern military tactics and strategy effects on the past (WWII)
3
Effects on Military Training for 'Career Soldiers' (70 years of service)
22
How would a command structure and strategy for a galactic war be organized?
5
Is The Use of Mounted Infantry a Viable Tactic for a Nomadic Empire?