How much electricity could an iron core moon passing over a copper deposit on a planet generate?

Assuming the moon is the same size as ours and its core is generating a magnetic field, and the copper deposits are quite large, consisting of a tectonic plate containing huge deposits of native copper, in a fairly high percentage form?

Would this electricity make something like reverse lightning, or would the effects be negligible?

Yes. The reverse of this is seen with Io and Jupiter.

The huge magnetic field of Jupiter induces a current within its moon Io which "feeds on Io's orbital energy" - it is the movement of conductive Io through the field that gives rise to this current and consequent magnetic field.

Of the large moons--comparable to our own moon or bigger--the outer three are icy spheres, but the innermost one, Io, is heated by tides, and as a result has volcanoes and an ionosphere which is a fair conductor of electricity. Jupiter itself like Earth is a magnet, but one that is 20,000 times stronger; as a result it has a large magnetosphere and a very intense radiation belt.

A dynamo is created in a magnetic field by an electric circuit, part of which is moving relative to the rest (additional conditions must also be met). The circuit may consist entirely of fluids (as in sunspots), but solid conductors can also be involved.

The conditions for a dynamo are fulfilled in the case of Io and and >Jupiter. Both are conductors, and they move quite differently--Io orbits, Jupiter rotates. Furthermore, the plasma between them conducts electricity very well along its magnetic field lines, which act as if they were wires connecting Io and the planet (drawing). One expects a continuous current to flow in this circuit, feeding on Io's orbital energy.

If your moon had a magnetic field (and it does not matter if it is an electromagnet like Earth or some giant fixed magnet) that extended far enough to encompass conductors on its planet it could produce current within those conductors as the moon passed by. Our moon is a long way away to do something like this but the moons of Mars are comparably very close and could serve as your model - a fast-flying magnetic Phobos.

The question then - what would the induced current do? One would think it would go to ground. However lighting comes from the ground up all the time. It has to do with charge difference - atmospheric charge plays a role too. https://earthscience.stackexchange.com/questions/580/why-does-lightning-strike-from-the-ground-up If there is a charge in the sky (from wind, dust - the usual suspects) and an opposite charge induced in the ground a path would form between ground and sky. 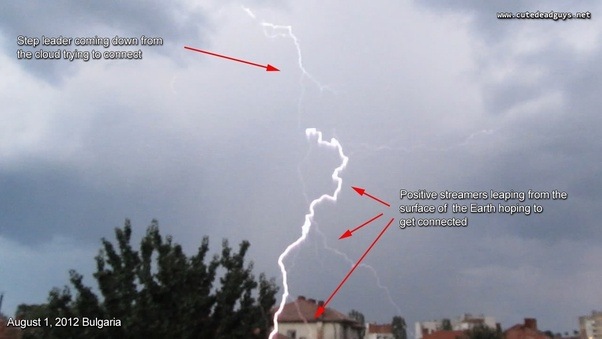 Its negligible. Your copper wouldn't be able to build up enough charge or even store enough current for us to notice.

Firstly, your moon is simply going to be too far away to significantly impact the copper.

Secondly the moon also takes roughly a month to orbit the earth, which means that it takes a month for you to go through your current range. As mentioned by @Mathaddict your going to have a frequency of ~4 x 10^-7 Hz which is nothing compared to our standard 50Hz.

Finally, your piece of metal is in contact with the earth. Literally. Any excess current it builds up is going to dissipate into the earth. Its called grounding.

Not the answer you're looking for? Browse other questions tagged reality-check geology electricity magnetism electromagnetism or ask your own question.

10
How can I generate electricity inside a cave network?
7
Is it possible to use Venus' temperature to generate electricity, and how would the electricity be transferred to Earth?
4
How useful would a electricity-over-water gun be?
11
How could an underwater civilization develop electricity?
4
Could a planet have a core of anything other than iron?
4
How could electricity stop working?
8
How Might I Design Mountains for My Tidally Locked Planet?
7
If all the iron and nickel in the inner core was transmuted into gold over two weeks
11
What is the most powerful magnetic field a planet could generate?