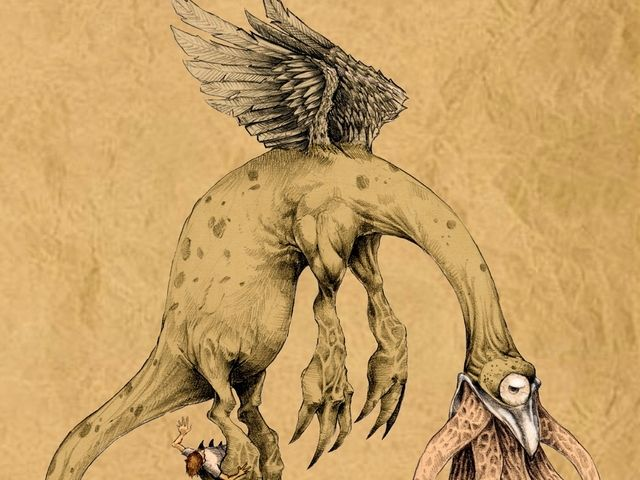 The snallygaster is a cryptid from Maryland. It is often described as resembling a half bird/half reptile like creature with large wings, a metal beak, tentacles like an octopus (sometimes depicted as emerging from its beak) and is known for snatching prey and draining them of their blood. Could something like this evolve naturally?

TL;DR: You are probably looking at a featherless therizinosaur with steering wings derived from shoulder blades, an internal bladder of lighter-than-air gas, a metallic-looking beak and a multi-appendaged, oversized tongue.

Well, I'm going to use this picture as a reference: 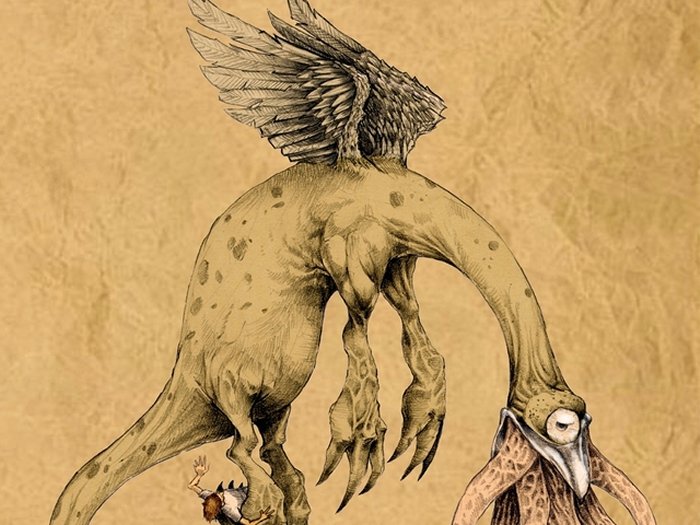 The first thing that strikes me here is that there are four limbs along with a pair of wings. This either means that it is a hexapod (Perhaps from an alternate Earth timeline where a six-finned lobe-finned fish colonized the land?), or that the wings are not developed from forelimbs.

Seen as the latter option is consistent with real-life evolutionary history, I'll go with that one. Instead, the wings can be in fact modified shoulder blades.

So, we now know that this is not a bird. Overall, its body plan is quite evocative, for me, of a therizinosaur: 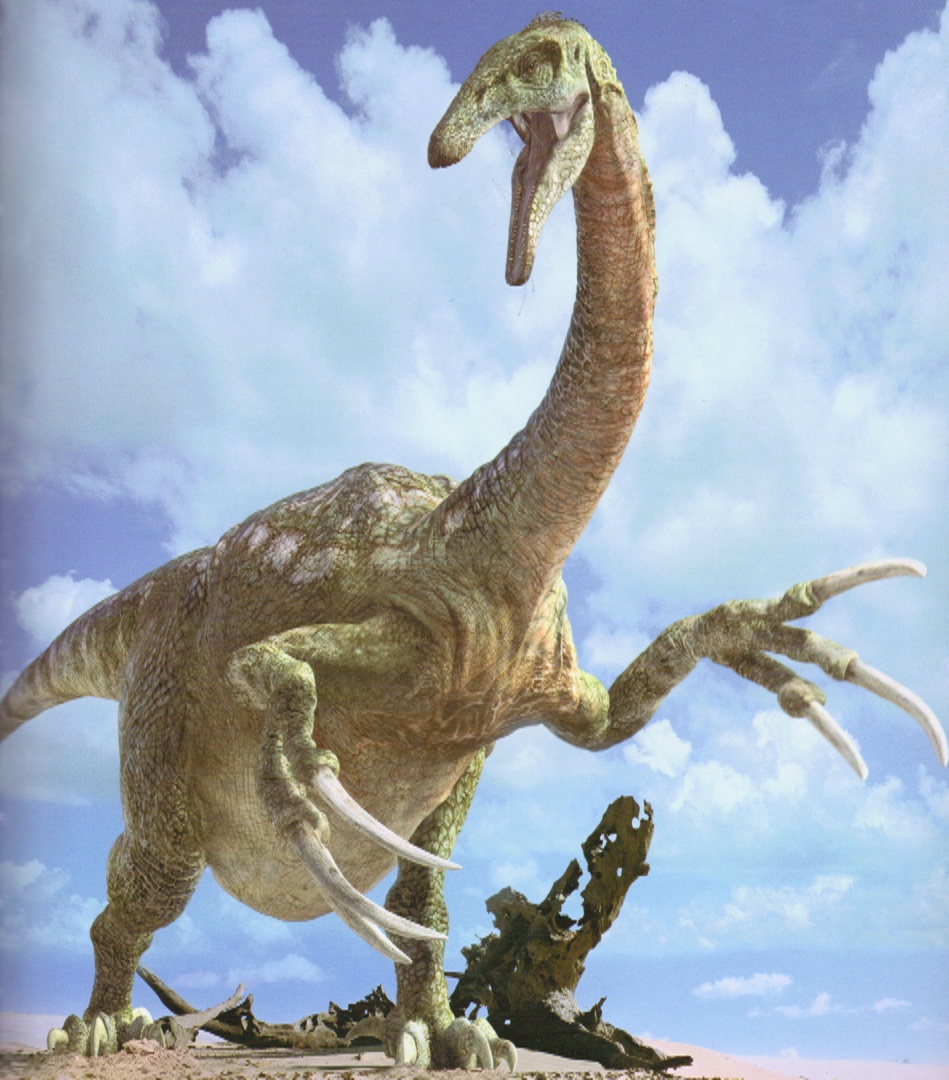 The above depiction is currently outdated, as we now know that they had feathers, but it is entirely plausible that a therizinosaur could lose its plumage due to environmental pressures (Stable temperatures? Semi-aquatic habits?). The feathers on the wings could stay though, as they are far more aerodynamic than any other biological wing on Earth. Also, therizinosaurs were extant at the time of the K-Pg impact, so they could have been potential survivors.

That being said, it is obvious that the snallygaster could not be supported in the air by these tiny shoulder-blade wings. The illustration depicts it as airborne, so I imagine that the wings could be used for steering (and display, too) if it had some other method of buoyancy.

As for what that method of buoyancy would be, perhaps it fills an internal bladder/sac with hydrogen or methane, making it lighter than air? I'm not sure how plausible this is given the apparent large size of the snallygaster, but it's something to consider, certainly.

As for the beak, some therizinosaurs had beaks, so that's okay. The metal part is tricky though, but not impossible. Technically, steel is made from iron and carbon - elements which are both found in animal bodies, but I'm not really sure if it could form some kind of sheath over the keratinous bill. There are plenty of birds with shiny, grey beaks, though, and since the snallygaster is a cryptid, accounts will inevitably be exaggerated.

Lastly, the tentacles. Since they emerge from the mouth, the most plausible option for me is that they are derived from the tongue. If the tongue was to split into multiple appendages, which would be quite feasible evolutionarily, engorge those appendages and gain limited independent control of the members, it would resemble tentacles in every way.

Why would this evolve? Well, while therizinosaurs do have grasping hands, many have long claws which make any kind of dexterous use of the forelimbs quite clumsy. As such, the tongue could have evolved its tentacle-like properties as a means of attaining a prehensile organ. The prehensile forepaws are very important to how big cats hunt, and is in part why they can tackle such massive prey more than virtually any other predator. I imagine that the tongue could start out as being one, long, serpentine appendage, and then going on to split into more members to grapple with prey better.

I believe almost anything can evolve naturally. Life on Earth is incredibly varied, and organisms come in all different forms.

It is not too difficult to conceive of all the attributes of your creature evolving as they have evolutionarily occurred in other organisms:

So the only difficult one to achieve is a truly metal beak - although keep in mind beaks in current birds are quite strong and adequate for most purposes already.

A snallygaster could have evolved from a toothed ornithuran. It would most likely eat fish. At some point, some fish would start to eat huge amounts of plant matter, which they would store in a crop. The snallygasters would evolve to consume this plant matter, by entering symbiosis with methanogenic microorganisms similar to what is found in ruminants. They may store the methane they produce in the blind-ended portions of their respiratory system. This would reduce their weight, leading them to increase in size and density, and also to increase the size in the body of the methane-storing respiratory organs. They might switch diets to become predators, and develop scaly armour over their body, to protect against prey. It may become larger, and start to hunt large prey like an eagle. The snallygasters could at some point rapidly shrink in population, causing a genetic drift effect leading to many snallygasters having Cyclopia. These snallygasters, while not as intelligent, may be able to have larger, and better at focusing eyes, as the resources and space for eyes is not split between two eyes. The snallygasters may evolve an extremely loud shriek, in order to find mates over a large area.

Not the answer you're looking for? Browse other questions tagged reality-check creature-design evolution anatomy cryptids or ask your own question.