Can planes fly on Mars?

My question is very simple, I want to know if the Martian atmosphere is too thin to hold planes up and, if it is thick enough, how high planes could reasonably go. This is considering heat management as a non-issue with the air-pressure being the only problem. Now I don't really understand how planes fly, to the best of my knowledge planes stay in the air by the wings creating a high-pressure zone below and a low-pressure zone above, just note that. Also I would like to know if planes have a proper military use on Mars.

Modified Versions of Current Craft Could do it The martian atmospheric pressure is about equivalent to 100,000 ft/AGL. We have air breathing military aircraft that have flown at 90,000 ft/AGL so its not outside the realm of possibility that we could engineer an airplane to fly in the martian atmosphere, though it would need to be going very very fast to make up for the lack of oxygen by compressing as much of the thin atmosphere into the engine intake as possible. I'm thinking a plane with a seperate oxygen supply or using fuel that is mixed with a strong oxidizer to boost it up to speed where a ram-jet would be able to kick in. It would be incredibly hard to maneuver until one got up to speed.

But Helicopters Would be Better Since helicopters generate lift based on the RPM of their rotors it would use a lot less energy to have say, an electric helicopter with rotors that are designed to scoop into as much of the thin atmosphere as possible at very high RPM. The real trick is keeping the RPM of the rotors high without the tips of the rotors breaking the sound barrier. Additionally, the engineering challenge of having rotors move at higher RPM is a lot lower than having to boost up to mach 4 just to be able to get enough compression in the intake to not need to be burning on-board oxygen. On Mars a helicopter would be a lot more efficient of a flyer than a plane.

NASA Is Already Building One

All the above is why NASA's next Mar's Rover is supposedly going to be an electrically powered helicopter drone. 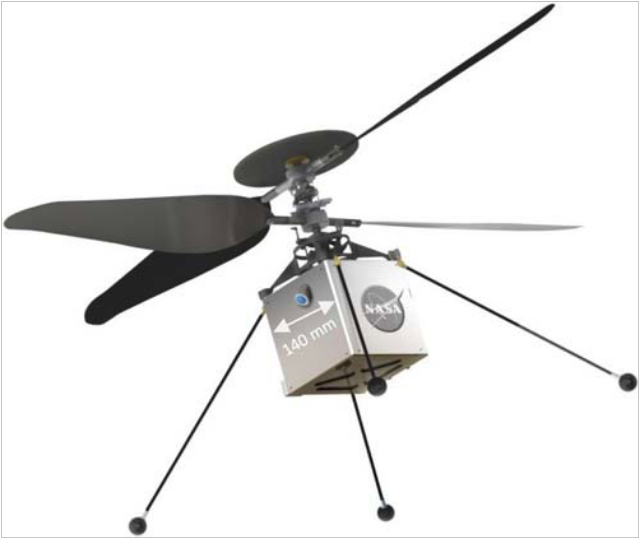 Here's some links to NASA talking about it.

Since this XKCD comic pretty much answers your first part of the question, I'll answer the second part about whether or not they have a military use.

The simple reason is that weather on Mars tends to be a lot more calm than on Earth. Those massive dust storms you might see in movies like "The Martian" don't actually have enough power to do any real damage to anything.

Due to the rocky nature of the environment, land-based vehicles might have quite a bit of trouble navigating the surface. Sure, there are rovers that can do it, but they're small and not exactly fast, and can't traverse things like vast valleys and mountains, both of which Mars has in large supply.

Planes would be able to fill this role easily. Fly to the enemy, bomb it, and fly back. And why stop at planes? Airships and Zeppelins might even make a return.

NASA has done much research on airships on Mars

Planes on mars are very difficult to use because of the low air pressure. However, airships have gotten quite a bit of attention from NASA. NASA values them because they can cover much more ground than a rover could, and a similar reason would justify their military use, even if just for reconnaissance.

Here is 2017 plan for a vacuum filled airship to float on Mars. Here are plans for a lightweight, space dropped Solar Montgolfiere baloon (pictured below). 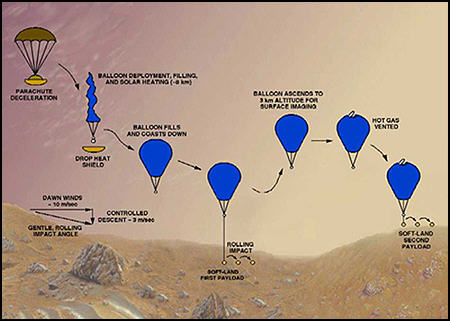 Not the answer you're looking for? Browse other questions tagged science-based technology .

10
Martian warfare: could motorcycles be used in war?
11
Design me a Mars drone

6
Great Flying Cthulhu
14
Designing a flag for Mars: drag and proportion
12
Feasibility of an 'Oxygen Radiation Zone': a non-pressurized natural formation on Mars that provides suitable atmosphere
6
How long would an array of mass drivers take to terraform Mars by transporting CO2 from Venus?
3
Could an aircraft fly or hover using only jets of compressed air?
8
What changes to planetary atmosphere, available materials or technology could make biplanes and triplanes remain dominant?
3
Flight drag and the superior limit size for hexapod dragons?