My islands (in the world I'm building) were formed from a volcanic hotspot. I want to build realistic islands, so I was wondering how tall volcanic islands are generally in relation to their area. Intuitively, there should be a rule, given that erosion of volcanic island mountains generally is accompanied by the island slowly subsiding in the sea, reducing the surface area and the height. Similarly, due to them mostly being shield volcanoes, the island's building from volcanism should have a similar area of lava correspond to the stacked up height of lava. So, is there a formula on how tall islands are based on their area? (+/- 3 percentage points should be fine)

For an example, here is Kauai, an old island, and Hawaii, a new one:

If this is impossible, could you do an estimate for a single island chain (Emperor Seamounts/Hawaii)?

I looked at the islands on the Hawaiian-Emperor Seamount Chain with surface volcanoes, and plotted their surface area vs. their maximum elevation, using data from Wikipedia. I checked that the topography of each island is indeed dominated by the central volcano or volcanoes, although this is a bit complicated on some of the larger islands, as there are multiple active cones.

I left out a number of islands, atolls, seamounts, and guyots. The islands I used in my dataset are the main volcanic islands; the few extinct islands are extremely small. Seamounts and guyots are underwater, and therefore aren't helpful. Atolls, of course, are old and too eroded to give us any helpful data. 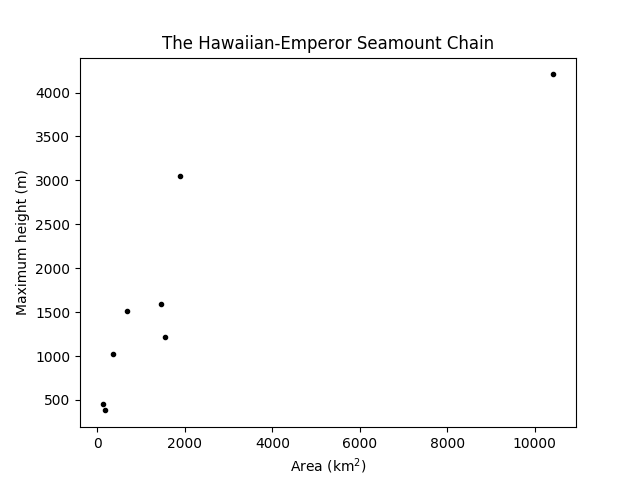 I then plotted the points logarithmically and fit a power-law model to the data, using this code by Aziz Alto. Power-laws are great in general, and are often the physicist's method of choice, so I figured it would be a decent starting point. 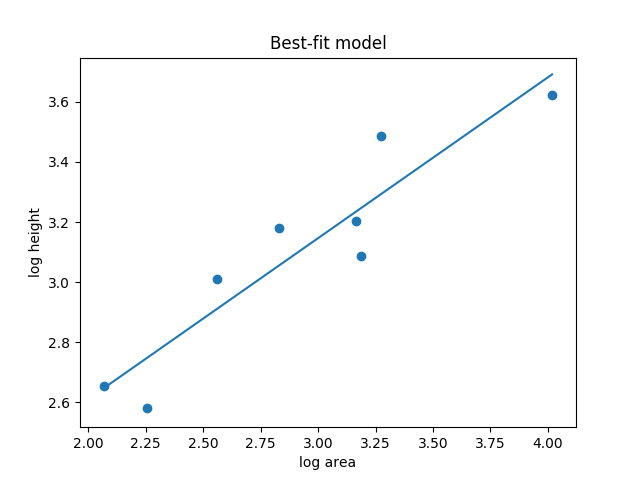 I doubt this relation has a physical meaning; I'm interpreting it as merely a statistical fit that will help you in your calculations and worldbuilding. Although the fact that the exponent is close to $1/2$ is nice, and maybe indicative of some physical law, I'm inclined to doubt it Maybe there's underlying physics; maybe there isn't. But I suppose it's a good enough solution, for your intents and purposes.

Here's the data again, with the best-fit model plotted: 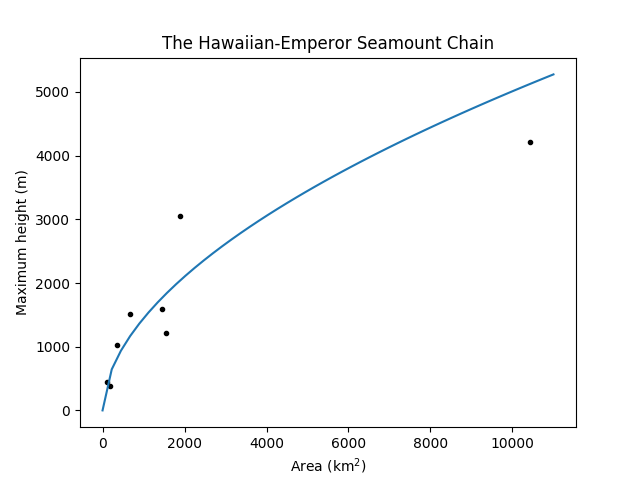 For this chain, a good approximation is $H\propto\sqrt{A}$. Since the islands are roughly circular and $A\propto r^2$, $H\propto r$, which is something of an interesting result. It does seem to agree with a model of shield volcanoes as having straight sides of constant slope - although that is still a simplistic picture.

I decided to test this model on other chains. In particular, you asked about the Canary Islands and the Azores. For the Canary Islands, I found a reasonably poor fit ($R^2=0.0375$) for a best-fit power-law model of $H\propto A^{0.13}$. The distribution of heights for the seven main islands appears to be somewhat random, which is unhelpful. A possible reason for the discrepancy could be that the Hawaiian-Emperor Seamount Chain is composed largely of shield volcanoes, and this trend may not apply to other types, like stratovolcanoes.

The Azores were interest, yielding $H\propto A^{0.28}$, with $R^2=0.368$. If we remove an outlier, Pico Island, we get $H\propto A^{0.20}$, with $R^2=0.541$. This is better than the Canary Islands, but still not as good as Hawaii. I do notice that all three of these exponents are lower than Hawaii's, which is interesting. I suspect it's partially because of the lack of a clear power-law trend, from what I've seen.

The Big Island of Hawaii does lower the power-law model a bit, but not by a huge amount (the exponent becomes $0.60$). It also lowers the proportionality constant somewhat.

So, use those 5 and 10 degree slope angles and you should be able to generate realistic heights for any volcano you want based on basal diameter.

I direct you to look at these references: https://en.wikipedia.org/wiki/Mount_Vesuvius, your better bet might be to look at this, since it was an actual island instead of Vesuvious. https://en.wikipedia.org/wiki/Krakatoa. Then there's the beautifully new island off the coast of Japan which is still growing, but I've had my eye on it since it first appeared some years ago. https://en.wikipedia.org/wiki/Nishinoshima_(Ogasawara) This one is of great interest to me particularly as judging by the placement of a former under water caldera, this one has the potential to actually be a permanent island unlike some newly formed volcanic islands. That and merging with an already existing island also contributes to it's chances of survival instead of merely falling back into the ocean as so many do. I'm neither a mathmatist nor a volcanologist so I can't give specific info. I hope this helps.

Not the answer you're looking for? Browse other questions tagged science-based geography map-making volcanoes or ask your own question.