What's the most effective clothing in a pre-industrial world of aggressive plant (and animal) life?

I'm building a highly verdant, "garden" world where fruit and vegetation grow so easily and naturally that they can be easily picked in passing by the relatively small human population. So, imagine an environment a bit like the Amazon jungle, with year-round vegetation.

As a result, humanity has established some stable, large-scale farms, while most people live in caravans of wagons that move from farm to farm, gathering wild fruit in the intervening spaces (these fruits can't be easily cultivated and taste better and are more nutritious than farmed food).

Extremely vicious animals and carnivorous plants are actively kept out of these areas, but such flora and fauna exist in more remote parts of the world, up to and including plant life that can kill (reminiscent of the vegetation in Nausicaä of the Valley of Wind). These are constantly encroaching on human areas, so people frequently have to clear away moderately dangerous animals and plant life. Some people do explore the more dangerous areas.

This is a pre-industrial society with technology equivalent to England around roughly 1200 A.D. The farms cultivate things like cotton and silkworms as well as some animals, so clothing equivalent to cotton, wool, and silk can be produced.

This means clothing will be relatively expensive and labor-intensive to produce, but the environment will encourage the use of at least protective clothing.

To my question: What clothing would you expect farm hands, traveling caravan hands, and rangers to wear? What's most practical? Assume no nudity taboo for simplicity's sake.

There is no mention of the climate of your society - however historically it plays a major role in how people dress, what they dress in, and how much cover they have.

As warm blooded creatures we need to keep a constant body temperature - and even the slightest variation would be uncomfortable. Even if the temperature is only slightly cool, such as around the 18ºC mark you should expect people to rug up.

However, in a jungle environment such as the Amazon as you mentioned in your question, the temperature hovers around 27.1ºC, and is fairly constant. This means you don't need to cover up to stay warm.

In fact, loose fitting clothes or non-at-all is probably better as the average humidity in around 88%, which means we need airflow around our skin to evaporate moisture. This is why many tribes in the Amazon never bother to completely clothe themselves.

In regards to defence, also, it may actually be detrimental to wear heavy armoured clothes in a jungle environment. Completely surrounded by leaves, twigs, branches, outcrops and rocks may enable agility to be a better defence than active engagement with an animal. You should also keep in mind due to humidity and temperature, and the fact it is a life-rich environment, infection from wounds would be a major problem, so better to run, or scale up a tree, than to stand and fight.

Now of course, status in your society often trumps comfort, but only to a degree. There is a reason head-dress and necklaces are usually the only adornments in jungle environments. 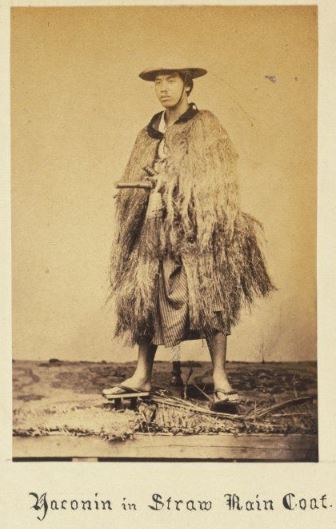 Straw capes are cheap, durable, and waterproof. They are definitely medieval tech. For purposes of discouraging predators I like how they break up the outline of the body into a haystack. Where is the meat under there? A surprise attack is liable to come away with a mouthful of hay, giving time to react. They are reasonable camouflage too.

Rice straw has water repellent properties. Raindrops striking a mat of straw will tend to flow along the fibers of the mat, rather than penetrate underneath it. For this reason, early Japanese rain gear was often made of straw, which has the added benefits of being cheap to acquire, easy to weave and fasten, and light in weight. It is, however, bulky in size, and highly flammable. In earlier eras, straw clothing had an additional advantage: it afforded a significant degree of camouflage in certain terrain, including forests and wetlands, similar to modern ghillie suits.

Prince Ashitaka has a sweet mino in Princess Mononoke. He looks like a running heap of straw. Gonza here is from the same movie with an awesome straw hat. 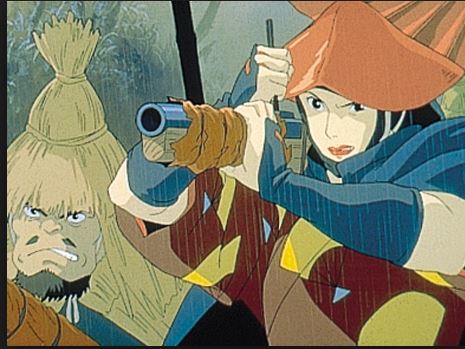 Layered burlap. Due to its coarse weave, it will be relatively inexpensive(low labor) when compared to other woven fabrics. It can also be made very thick to provide significant protection. The fact that it is plant based means that in your world, the raw material will be readily available for all. It is also very strong.

Not the answer you're looking for? Browse other questions tagged humans environment earth-like civilization clothing or ask your own question.

19
Could animal life develop on the TRAPPIST-1 planets?
0
If Earth was returned to a 'natural' state could it break down present human culture?
9
What would be the consequences of a world that has only one dominant species of non-oceanic animal life?
4
An epidemic kills all plant-life on Earth. What would happen to the fauna? Is there some realistic time-line when happens what?
10
On a frozen world, what would be the thinnest, warmest materials to make clothing from?
3
Can trees and plant life grow on rock?
6
What would the flora and fauna be like on a planet with the most competition? The most violent planet
5
How to have hollows with complex plant and animal life on a planet
4
When earth is filled to the brim with plant-life, can it cause a hyperoxic environment?