I found this thing 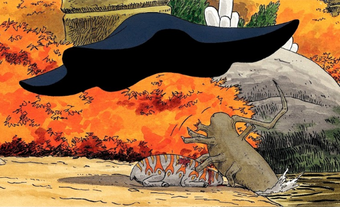 In its dormancy it folds itself and it rooted to the ground. However when it detects prey, it hovers above and engulfs its victim, wrapping it in its embrace, paralyzing the prey as it consumes it. I would like to add something like this to my world so I have a question : A pack of many smalls (less than 40cm diameter) or one big (1m)? I think smaller is better for escaping predators while eating and avoid defensive systems from preys like spikes but I don't know how they could resist to strong winds and not get thrown to the ground

Think behavior like bats of the wind. Instead of hunting at night like bats these creatures would hunt when there is no wind and staying rooted when the wind blows.

By having a sensor which would sense atmospheric pressure changes for when it's about to storm, and vibration sensors for when the wind blows nearby plants. It'll hunt when it under its ideal conditions or recklessly when hungry.

Some of these would get displaced by wind absolutely, but that would be how they spread to new territories and find new victims and perhaps even procreate.

That said I would go with medium sized, provides a challenge to larger creatures without dominating them and has advantage to the smaller ones placing it at an ideal spot in its food chain, in the middle.

Synchronizing the action of many floating specimens would hardly work, and they would need to be quick to have hope of trapping a living prey. Imagine letting some paper sheets float: can you make them land all around the same spot? Though luck, I am sure.

Moreover, if they react to the presence of the prey, the only way to have them react simultaneously would be the prey to be at equal distance from all of them. Then at best you can trigger two of them, the other would trigger later.

This said I think it's better if they are bigger than their prey. And, predating juveniles, it's likely that their defensive systems (thorns, etc.) are not fully developed.

It makes more sense to not have them fly.

You state that they hang out "rooted to the ground". How do they get into the air to attack? They would have to get up and start flapping around and anything with any sense will get out of there once the things starts getting airborne. It would be like a hawk that walked around and took to the air when it saw a chipmunk. That chipmunk would be so out of there. I assumed these creatures might live in trees and drop onto things below, which could work - but they live on the steppe where there are no trees.

If it stayed on the ground and wrapped around prey that walked on it, that is a solid ambush predator strategy on land and in the water; stargazer fish are one of my favorites but I am sure you can think of others. But you could not really call it a flying nightmare then.

If you want to have them get up and fly over then I think small is the way to go - very small and very quiet so the prey does not consider them as predators. Maybe 5mm - more like mosquitoes. If they operated as a pack, quietly attaching one at a time the prey might not notice until it started to get sleepy. Pack behavior would not be coordinated like a pack of lions but rather like a swarm of mosquitoes - all the mosquitoes in the area perceive the same thing at the same time and so all do the same thing.

If want steppe and want big and want flying then the best would be to have these glide around at altitude then drop when they see prey, like hawks do. Then the larger they are the better, because it will make it easier for them to overwhelm prey. They would not look like black trash bags either unless they only came out at night. If they are out in the day they would be light to blend against the daytime sky.

One fun potential I don’t think you’ve considered is having the whole organism actually be a colony.

Consider a single flying nightmare to be a bizarre swarm of eusocial flatworm-like creatures. Though individually small they cling together at the edges of their bodies using tiny cilia, forming a single giant sheet (possibly of multiple layers for strength. If they also flatten out their bodies for extra surface area such a colony could get very large indeed.

When a sufficiently large colony detects prey it uses this single sheet to engulf and suffocate the prey while also dousing it in acidic digestive compounds. The worms also contract, constricting the prey’s movements and further contributing to it’s demise.

If threatened by a larger creature the sheet can ‘dissolve’ into thousands of constituent parts to escape, later recombining into it’s deadly colonial form using simple pheromonal signals (much like ants forming a raft). Each individual worm can slip away un-noticed much more easily than a whole sheet.

The only real issue these guys have is the ‘flying’. It makes much more sense for such a creature to be an ambush predator, hanging in wait from a tree branch and dropping onto it’s prey like a slimy duvet of death.

But think about it: if a huge black sheet manages to get from the ground to a tree branch without visibly climbing anything (much easier to climb as a swarm of worms after a full meal) then you could be forgiven for assuming it flies.

Not the answer you're looking for? Browse other questions tagged xenobiology fauna .

8
Flying Plants: Island edition
1
Purpose of Engineered Organic Flying Whales
7
Flying Mammal Roughly The Size of A Large Dog
22
An animal that is physically separated into multiple parts
5
Evolution of flying skulls?
2
how to make realistic flying jellyfish?
2
How dangerous are the equivalent of flying piranhas to the ecosystem?