Uproot, Lift Up and Replant a City

It finally happened. The inhabitants of Metropolis, the capital of Our Nation, have finally had enough of the swampy lands, suffocating summers, freezing winters, spring floods, risk of surprise invasion by sea and whatever other nastiness the local geography had in store for them.

They have decided to move Metropolis. Since Our Nation is a glorious empire with vast, vast resources at our disposal, we will literally uproot the entire city and move it some place we like better (about 161 km away -- 100 miles away).

How do we go about moving a city of 5 Million?

How much time, how much energy would it take? Can it be done in bulk, whole blocks at a time? Can you literally float it, in the air or on a river?

This is probably the most destructive, tyrannical, and least glamorous answer you are going to see.

We can already relocate structures...it's simply a matter of building a metal framework solid enough to support the structure underneath the foundation. Jacking this framework up off the ground, and then putting wheels on it and pushing it to wherever you want to drop it off. The entire process must be done very, very slowly so as not to damage the building.

In order to relocate something like a Skyscraper (which has a very high center of gravity, generally compensated by affixing the structure to bedrock) you are going to be at a risk of it tipping over unless you can build a sufficiently massive framework to stabilize it.

From there, it is simply a matter of scale. Stronger frameworks, more/stronger jacks, more/bigger wheels. Heck, if you can build something strong enough, you might be able to carve out the bedrock that the city is built on, jack THAT up, and relocate the whole thing in one go.

But here's the catch. Anything between Point A and Point B is going to have to go. Anything that is not nice, flat ground. This means towns, cities, mountains, lakes, etc. The smaller of pieces you move the city in, the less widescale obliteration you need to unleash. Trying to take a skyscraper up a hill would end in a tipped-over skyscraper.

You're probably also going to have some repairs to make, regardless of how careful you were, because things are going to shift and move while being relocated. Hopefully not to the point of anything falling down entirely, but you'll have cracked walls, damaged floors, etc.

I'm sure someone else will come up with a more fantastic answer, like orbital lifting or somesuch...but I figured I would toss up the simple 'we already do this on a smaller scale' answer.

I once wrote a story which involved that.

There's an elevator into space in the center of the city. The city needs to be moved (built on a volcano that was inert but the strain from the elevator reactivated it, and it will erupt soon), and they decided to use the technology in place to move the city.

First, reinforce the supporting ground through building tunnels and drawing cords of the same material as the space elevator through them, making the clump of stone and earth not fall apart from the stress. Then reinforce the elevator to support the whole mass, adding extra ropes. Then pump a lot of water up beyond the Geostationary orbit, forming a counterweight of ice in space.

Through extending the network of tunnels, separate the city from the native rock. At certain point, the counterweight will pull stronger than the mass of the city. Multiple heavy ground vehicles provide a moving anchor, so that the city doesn't just float away. They move the city towards the destination, holding it with long ropes several hundred meters above the ground.

Then a stray asteroid hits the counter-balance, and the city falls, nearly flipping over, the elevator ropes snap, twisted as they were not meant to, and the city lands on one side of the mountain, houses of the other side hanging nearly upside down over the jungle below, providing arena for my story. 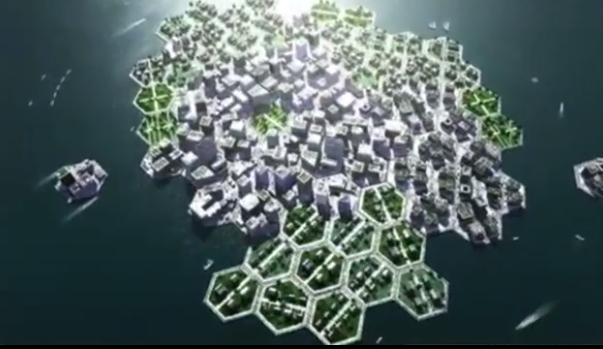 Dig under it and put in structural bracing to support the buildings and then tons of pontoons. Then let the ocean in to let the city float up, and then tow it up the coast to the new destination. You haven't described the city at all (building height, materials used etc) so this may take some super materials to make possible.

Edit This gets you out of the swamp and 100 miles away into a better climate with hopefully milder winters, without having to level mountains. Which takes care of the seasonal flooding and malaria. Since everything is pretty solidly braced at this point, if you want to get out of the water to get to higher ground you could put wheels on the city boats pull them out. And because they are raised up, it would be pretty easy to put the utilities in underneath.
Or you could find a sheltered harbor and have a floating capital.

They'd still be near the coast, so maybe surprise attacks from the sea will still be a problem, but these are people with the technology to move a city. Seems like a fleet of warships to patrol the ocean and remove any surprises before they become a problem should be a small task.

Put the whole city on wheels

Do this as follows:

Metropolis has an area of 180 km^2. If it's roughly circular, it has a diameter of about 15 km. This is the width of the path you need to clear.

Accelerating the slab to 1 m/s (a reasonable speed of 3.6 km/h) requires 5.04*10^17 joules of energy (kinetic energy being equal to mass times velocity^2). If we take 24 hours to get up to speed, this implies (5.04*10^17)/(8.64*10^5) =~ 10^12 watts of power to within an order of magnitude, or 1 thousand gigawatts. This is roughly equal to the total electricity grid output of the USA. So if Our Country is of similar size, you just have to ask the citizens to give up all electric power for a day, which I'm sure they will be happy to do for the greater glory.

Alternatively, you could use nuclear pulse propulsion to accelerate Metropolis, by building a large blast absorbing plate behind the city and setting off a number of nuclear explosions. This would leave a radioactive wasteland at the original location of Metropolis, which might be regarded as a drawback.

At 3.6 km/h it takes about 45 hours to move Metropolis. In fact it will take a little longer, allowing time for initial acceleration, and deceleration at the other end. Metropolis is presumably moving uphill; this may increase the energy requirements, but conversely you can use gravity to help with the deceleration.

For the most part, this method has the advantage of minimal disruption except when the city is actually in motion, which is only for a couple of days.

Not the answer you're looking for? Browse other questions tagged science-based cities megastructures .

10
Growing a city (literally)
7
Pros and cons of a city on water
24
Conditions for a city on a mountain
6
Building Revelation Jerusalem: A City of Gold and Gems
1
Mozart city proposal
7
City defenses against kaiju attacks?
4
City-Closing Event
5
What would the climate of a planetwide city be like?
5
Urban and suburban architecture on a perpetually stormy planet