It takes a lot of work, but it can be done. The Mongol Yam, a horse-based mail system, is probably the best example that has been done before. But after visiting the local science museum recently, I saw these.

Acoustic Mirrors, you speak in front of one, and a person at the other one, some distance off, can hear what you say. In between them, you cannot hear anything from them.

I was wondering if a system of these could be set up, to have rapid transportation of information from one point of a kingdom to another, especially when I don't have horses.

If possible, what's their max range? How would weather affect them?

Lighthouses have been in use since Antiquity.

The idea is relatively simple:

On top of that, we apply the Bull's Eye Lantern principle: the light source is encased in an opaque (reflecting) material which only lets the light out in a particular direction, somewhat focusing the beam.

And then we put a movable panel in front of the light exit, allowing the operator to modulate the output.

That's it. Make a network of such lighthouses across the countryside, teach morse code to the operators, and you have messages propagating at the speed of light (minus delays incurred at each hop).

In order for your system to work sound from one dish must hit the other but wind will likely blow that sound off course. In order to ensure you have some sound hitting the other dish you may need a dish whose length in ratio to the length of the distance across which the message is being sent is greater than the ratio of the wind speed to the speed of sound.

Doing some back of the envelope maths and using 8m/s as a good wind speed then we find that your dish length needs to be 2.3% the length of your route AT least. The longer the better if you want a strong signal in high wind. This means for a five mile route you have a dish about two hundred metres across this is hard but not impossible. Even then however a strong breeze is all it takes to render your relay system useless.

You might be able to solve this by moving your sound source or acoustic mirror, but that requires the sort of quick, reliable precision you get with lasers that would make for much more reliable communications technology.

You could put everything in a tunnel, but those sorts of tunnel systems would be incredibly hard to maintain. A more reliable system might be using acoustic mirrors as telescopes to listen in on extremely loud sounds, such as gongs, bells, organs or large firecrackers, similar to acoustic aircraft detection.

I am aware that this question asks about acoustic mirrors, but there is a far better alternative. Normal mirrors! you can make aqueduct style stone tubes that are a few centimeters wide, bury them between points, using mirrors to turn, and then flashing a light from a lantern down the tube will cause the light to be reflected off of the mirrors all the way to the other end. Use a Morse code-like system, and you have a light based telegram system.

Such a system, assuming it was feasible (which isn't) would not be practical, let me explain you why.

First, the principle behind it is to have the speaker and the listener being positioned at the focal points of an ellipse, similar to the whispering gallery. 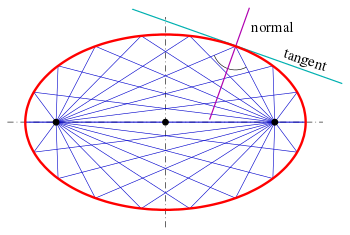 The properties of the ellipse make it that the acoustic waves emitted in one focal point will converge into the other. But this mean that, once you have built your elliptical mirrors, you are bound to a fixed distance. Not one meter more, not one meter less.

But first you need to be able to build two elliptical surfaces with narrow enough tolerances that the waves are properly focused, which is rather challenging.

You can bypass the problem by building two parabolic surfaces (you just need to be able to spin a liquid fast enough while it becomes solid), but that would be less efficient, as you would lose part of your signal. 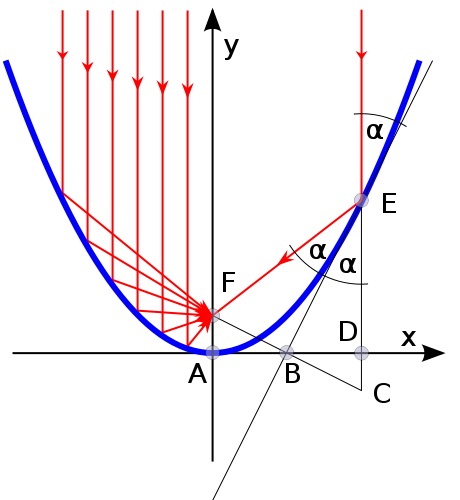 But at this point you would need an extremely precise alignment to be able to capture the acoustic waves. In practical this could be, at best, a though task, since you have to compensate for the motion of the air in between the two surfaces. Any shear in the wind flow will surely destroy the synchronization between the various paths, destroying the communication channel.

Late addendum: apparently the approach with parabolic surfaces was used in UK around 1920, to detect airplanes crossing the Channel. They could hear an airplane from 25 miles, giving 15 minutes of warning. More info here (page is in Italian). Mind that, being just a receiver, they were less annoyed by wind: they just needed the airplane to be at the suitable location.

Others already said why acoustic mirrors are hard to use. My suggestion is a system of flags, not unlike the maritime flags:

The communication system would be composed of many flag stations, each one with 4 to 6 flag sets (for communication with several stations at the same time) and an equal number of telescopes (to see other stations' flags).

There would be flags for specific meanings, for letters, numbers and symbols, for start/end character, start/end word, start/end message, and signal incoming message.

The system would be slow to transmit, from the taking out and putting on several flags at once, for each character/word; but the bigger distances traveled (several kilometers with almost no delay) would make up for it.

I think the idea is brilliant, but without using magic as a means of facilitating it, you'd be hard-pressed to truly explain it without some system of underground tubes or wires - even only if left behind by a previous civilization.

In my own story, I've borrowed from HTTYD's tv series and created messenger dragons that work like a little like messenger pigeons only a little more intelligent. They can be told to seek, much like a scent dog. Or told to go somewhere specific. I can't say they're the same level of intelligence as humans, but there are some dogs that can be trained to read or count, or differentiate colors, to a certain extent. And my mom is always telling me: "I'm sure you'll figure it out, with a little time and some patience, towards yourself if nothing else."

I certainly always expect too much of myself and get frustrated when I don't live up to my own expectations. Me thinks it is a weakness in all of us writers.

PS: Although I still think the idea is plausible, I looked at the link you provided. It was not the 'mirror' I expected it to be, I guess I was thinking of the mirror on the wall type. :-) silly me. Still a neat concept though. I will be following this conversation for future input.

As others have noted, this is not going to be a very practical system, in terms of cost or reliability.

But if you are willing to live with these issues, then maybe go for something mildly interesting such as the whistle language of the Canary Islands to either boost range (requiring less reflectors, and therefore cheaper) or reliability of the overall communications system.

A possible solution can be the African drum language 1. It was probably the fastest means of communication before the invention of telegraph.

Not the answer you're looking for? Browse other questions tagged technology medieval communication audio or ask your own question.