Can a medieval castle be made today? [closed]

Not sure if it fit well this website, history.SE, or if it's off-topic, but I have a simple question:

Can we build a medieval castle, with the same methods as they used at that time, in 21 century? Do we have enough knowledge, or are some knowledge lost? is it even legal?

Not only you can, but it is currently done: Guédelon 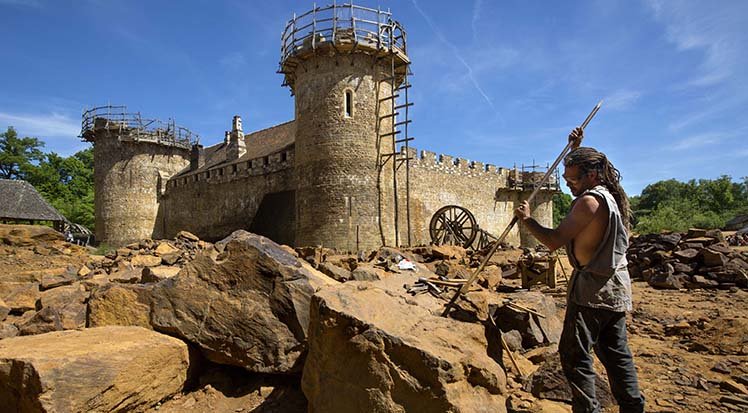 Guédelon Castle is the perfect example to prove you can do it. It's both an experimental archaeology project, and a touristic place.

The goal is to build a 13th-century medieval castle, using only medieval technique. even ressources are made with medieval technology, with wood coming from the forest and stone coming from a quarry. Some of the knowledge is lost, but that's the goal of experimental technology: try to find the lost thing by doing it with the same constraints they had. The project started in 1997, and will probably end circa 2030.

Currently, seigniorial dweling and chapel is ended, while the walls are almost ended. Aside the castle, there is also a village with a wattermill, a smithy, and lot of other building for several crafters such as potters, ropemaker, carpenter... All of them work with medieval technique, at the begining with only theorical knowledge, and now with practical ones, as they experiment a lot.

This is a 30 year project, and by itself, proven to be possible. However, it is possible thanks to Michel Guyot, who bough several castles in order to restore them. Due to scientific, historical craft interest, lots of people work here for free. Also, lots of earnings come from both tourist and regional/governmental funds. Therefore, if you want to make a castle only for yourself, as a private project, it will be much more costly.

We are actually building a medieval castle with medieval technology:

Guédelon Castle is a newly built castle construction project located in Treigny, France. The object of the project is to build a castle using only the techniques and materials used in the Middle Ages. When completed in the 2020s, it should be an authentic recreation of a 13th-century medieval castle. (Wikipedia) 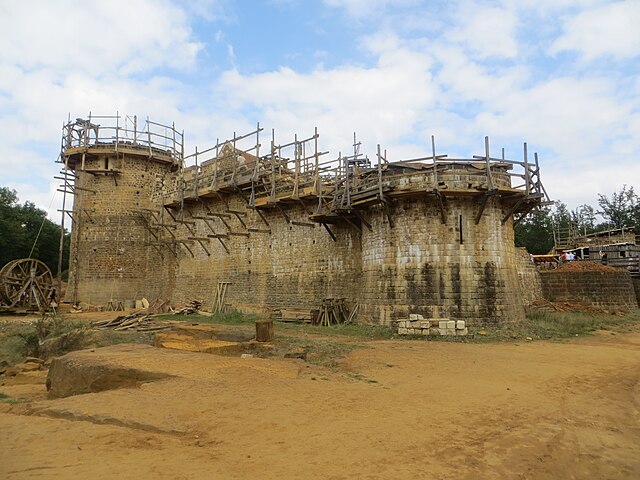 This is a typical project of experimental archaeology:

In order to fully investigate the technology required in the past, the project is using only period construction techniques, tools, and costumes. Materials, including wood and stone, are all obtained locally. Jacques Moulin, chief architect for the project, designed the castle according to the architectural model developed during the 12th and 13th centuries by Philip II of France. (Wikipedia)

The project aims to test the historians' and engineers' understanding of medieval construction techniques. When completed the castle will serve as a great tourist attraction; since actual medieval castles are historical monuments, tourist access is limited: in this neo-medieval castle there will be much more freedom of movement.

Yes you can, but it would be expensive and may not meet modern building codes.

yes, we can, there are some minor details that are likely to have been lost, more so for wooden castles since the wood of course decomposes much faster than stone but for the most part researchers do know medieval building techniques.
There is even a modern day recreation project in France called Guedelon that is only using medieval techniques.

Not the answer you're looking for? Browse other questions tagged medieval construction modern-age or ask your own question.

16
Medieval low-energy houses
8
How would medieval combat differ if its arms and armour were refashioned today?
56
Would a castle built at the top of a mesa have unusual weaknesses?
0
Knowledge of human anatomy - how effective (torture) is it in a medieval setting?
44
Is it possible to create a Gas Mask using only Medieval Technology?
10
How early can transparent glass windows be easily available?
5
How thick a stone castle wall needs to be to withstand a modern tank?
14
Medieval flying castle propulsion
60
Modern warfare theory in a medieval setting