What would the proposed advanced civilization be like in the Young Dryas? (12,000 years ago)

It has been proposed that an advanced civilization existed 11-12,000 years ago and was wiped out by a comet strike which hit glacial ice and caused a massive flood. Remnants of this civilization are allegedly responsible for pyramid building technology around the world and the myths of Atlantis.

What would such a civilization be like? Moreover, how advanced could it have been, given:

Maybe some other stuff as I think of it.

NOTE: In following the proposed theory (or theories) a comet strike hit the North American Ice Pack and caused it to melt fairly quickly. This caused sea levels to rise by about 400 ft. So even if such a civilization wasn't located in North America, the sea level rise would affect any civilization that was located near an ocean (which is not an unlikely assumption). I think most of these basic notions (sea level rise, end of ice age, etc.) are accepted by mainstream researchers at this point.

The only option for an advanced civilization to have existed in that era is for it to be isolated.

If any non-isolated civilization would have reached bronze age some 11-12 thousand years ago, its artifacts and technologies would have spread well beyond its borders. For every advanced ancient civilization that we know, we can trace its influence in its neighbors. The knowledge of pottery and agriculture, for example, must have had spread widely.

Thus, this hypothetical civilization must have either live on an island that have since disappeared, or maintained secure borders, without much of a trade with outside tribes. Additionally, if this civilization had advanced architecture, it would have been very likely found already - unless the area was flooded and covered with silt. Given that sea levels had risen some 80 meters since that time, we still may find a number of surprises in shallow seas.

Mohenjo Daro, 2500 BC, was a well planned city with plumbing and flush toilets.

I think the unique thing about our current civilization is pretty much down to our energy exploitations, particularly electricity, in all its uses and all it enables; but also oil refinement and gasoline (both of which are also highly dependent on electricity), even natural gas.

Besides that, homo sapiens sapiens; what we are, with our intellectual and memory capacity and language, has been around for at least 40,000 years, and perhaps 150,000 years. Any civilization we have had that did NOT include those energy sources, including the architecture of the Romans, the civilization of the early 1800s, including high mathematics and astronomy, and the physics of Newton, including the Democracy of the French and American revolutions, would be possible. The Vikings had steel as good as our modern steel in 800 AD. They only used it for weapons, as far as we could tell, but there is no reason they couldn't have used it for machines, powered by human or animal labor. The Romans built the Colosseum using sticks and ropes (and pulleys and ingenious wooden machines), the same for their Aqueducts, still mostly standing. All over the world pyramids and vast structures were built. The Mayans understood astronomy better than modern man did until the 1900's; they pinpointed the center of our galaxy and correctly computed to the day the cycle of days between the sun/earth crossing over that center.

For the purposes of fiction, I would not underestimate the ability of a pre-flood (13,000 years ago) civilization to conduct accurate science, build precision machinery powered by human or animal muscle, and to cut and shape stone or wood to their specifications. I would leave out electricity and refined petroleum (but not refined animal fat), or the use of natural gas.

I would not leave out two major power sources in use for centuries before those sources; wind and water. Dams to store water and exploit rivers and dam drainage with water wheels has been around for thousands of years. Wind mills have been around for centuries, with many configurations. Ways to store energy and release it slowly have, too, which is exactly what we do with something like a cuckoo-clock: Converting potential energy by gravity to controlled circular motion does not require any modern energy source to accomplish; the same thing can be done with a windmill pumping tons of water to a high place and then letting it fall to a lower space; or raising a boulder to a height for a controlled fall that pulls on a gear.

I wouldn't hold back much; such a civilization need not be very primitive at all, it could have large farms, buildings, advanced politics and extensive public works, planned cities of stone buildings like Rome, fully fresh water provided door to door with extensive sanitation, schools for the young, huge farms, commerce and trade between cities.

They may not have the ability to survive the flood. It would still have made sense, then as now, to locate your city on the ocean shore for both transportation and their sea food industry, and they may be covered in water today. There are mysterious stone structures under water that suggest that is true.

I would avoid "primitive" characterizations, I would describe a pre-Industrial Revolution civilization; before about 1800 (when Volta first understood enough to build a voltaic pile (battery)). Edison was born in 1847, the first internal combustion engine was 1872, the first electric light in 1879.

In order for this to be plausible, you would have to make some careful hand waves as to the location of your hypothetical civilization(s). The glaciers and areas nearby would be fairly obvious as places to avoid, since they would be extremely cold and devoid of much that would be considered usable for most premodern civilizations. Like Amadeus, I think any civilization which had made to to extracting petroleum, or using electrical energy on a large scale would have left clear evidence of its existence.

However, they would have needed to be near ports or rivers for trade and transportation (like most ancient civilizations), and many rivers would obviously have been fed from lakes of glacial meltwater. Much of the modern Great Lakes in North America were effectively one large lake fed by the glaciers and trapped behind walls of glacial ice, for example (See this list of ancient lakes for other examples). In the scenario you describe, the sudden heat pulse and extra meltwaters would effectively breach the ice dams holding back the waters (which is what actually happened), creating catastrophic floods which in some places stripped away massive amounts of surface cover and created channeled scablands 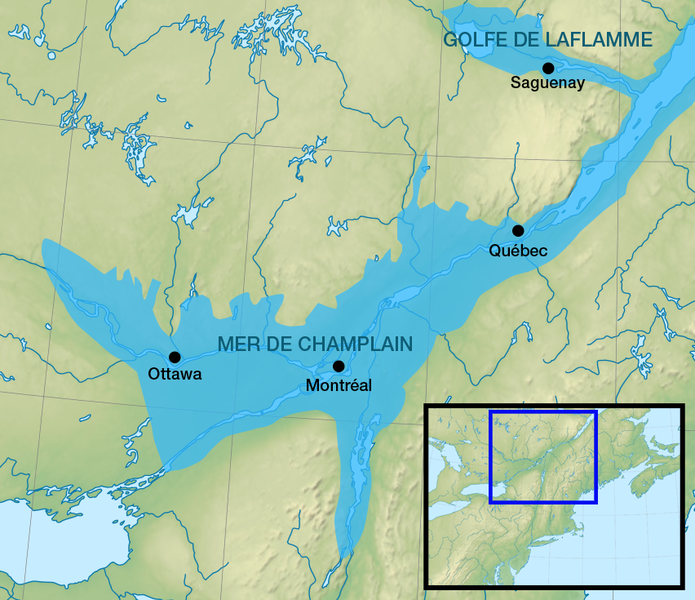 The Champlain Sea. Uncorking this stopped the "Atlantic conveyer" and radically affected the global climate

Any human civilizations or artifacts would simply have been swept away, and even fields, walls, large scale architecture like aqueducts and indeed anything less than the Great pyramids would have been scoured away.

One place to put your civilization would be to locate it on top of a geothermal hotspot (some modern examples are Iceland or Yosemite or Hawaii) that was surrounded by glaciers that didn't encroach due to the geothermal heat of the area.

If they used mostly stone and wood, the advance of glaciers and collisions of stone things during the flood would cause them to not look human made.

The members of the advanced civilization would have seen this coming, left with their moveable goods - including metals and glass good - entering onto a Noah-like ark (and carrying a couple of every land animal that lived in their little geothermal niche would be more plausible than doing so for the world as a whole), and then cached them somewhere that there were not found by anyone until the dawn of the story, except for a handful of artifacts sold in trade (explaining, for example, the Antikythera mechanism).

But, perhaps when the members of the ancient civilization encountered other humans, their lack of exposure to disease in their isolated circumstances caused 90%+ of them to die as happened when Europeans reached the New World and in many other cases of first contact with "uncontacted persons" by outsiders. The rest could have been killed by hostile people or found that they didn't have the capacity to reclaim the low tech necessary to survive in the post-impact world without the systems and geothermal energy that their advanced civilization had relied upon. So, despite surviving the impact and the flood, diseases later wiped out the members of the ancient civilization and caused their knowledge to be lost to the world.

Moreover, many of the goods that they traded would have been traded to people living in coastal cities that were inundated at the time of the impact/flood, and would not have been accessible in the intervening times.

Err, dude. All Out-of-African humans have Neanderthal and Denisovan (and perhaps H. Ergaster or other yet unknown species) DNA in them.

Unless this civilization arose in an island in splendid isolation for thousands of years, this would be quite difficult to imagine.

Also, we find plenty of cultural artifacts (flint tools) from the far-away paleolithic (think 1 or 2 millions years ago.)

So it is almost unimaginable to think a relatively advanced civilization would disappear without leaving any trace in such a short time (12K years.)

The only way to make this story feasible (no racial mixing and no evidence left behind), methinks, it's to place this civilization in complete isolation in, say, Beringia or the Sahul land bridge.

These land bridges have been submerged by over 100m of water. That takes care of "no artifacts left behind."

You'd still have to work out how such a civilization remained endogamous (that typically only works with small communities), and how they disappeared (being an advanced civilization.)

Not the answer you're looking for? Browse other questions tagged technology civilization .