Would a glass sword be plausible and useful?

Though glass knife existed and are still used in modern electron microscopy, glass is known for its brittleness and a sword need to be able to parry an attack. But the idea of a transparent glass sword is very appealing aesthetically to me.

So if plausible, in what ways would a glass sword be useful in an alternate 19th century setting where gun ownership began to rise? Can it be reinforced with other materials? Is it possible to be a weapon of assassination or is it only possible to be a ceremonial weapon?

In comparing fracture toughness, we see that Aluminum is perhaps 20x as tough as glass, while steel more like 50x as tough.

There are very tough glasses out there, but they will never be as tough as metals. Here is one company that advertises a mostly transparent glass/ceramic product. They don't advertise the fracture toughness of the material (because it is low) and instead concentrate on hardness, bending strength, and stiffness (which are comparable to steel). The best their ceramic products do is 7 MPam$^{1/2}$, which is about 1/3 of Aluminum and 1/7 of steel.

What does this mean? Well for stabbing a squishy meat-bag of a human, they will do just fine and be quite fatal. But if the person is wearing some sort of armor underneath their clothing, these hardened glass knives are as likely to punch through the armor as steel (because they are just as hard and stiff) but seven times more likely to break while trying to punch through.

So I guess the answer is...maybe?

It would presumably be less practical than the Aztec Macuahuitl, unless those reinforcements are amazingly effective.

What you want from your glass sword is aesthetics; it doesn't seem essential that it be technically a form of glass. What I propose is actually a crystal.

Sapphire is the pure crystalline form of (otherwise very common) aluminium oxide. It is extremely hard -- much harder than steel, and nearly as hard as diamond -- and quite tough. It isn't as tough as steel, but similar to cast iron, and very much tougher than glass. It is also much more resistant to high temperatures than steel, so at white heat it is actually tougher than steel. And it is -- or can be made -- water clear, far more transparent than ordinary window glass. It is about half the density of steel: light, but still much denser than glass, plastics, or light alloys, so perhaps making for a sword that it fairly lightweight, but has some heft for powerful blows. Alternatively, the lower density could be "spent" on making the blade thicker and wider, for greater strength.

Although this technology was developed well after your period, the basic tool required -- the hydrogen blowtorch -- did exist in the nineteenth century, and it is quite plausible that in an alternative timeline, synthetic sapphire may have been discovered far earlier.

Why would someone want a sapphire sword? One or more of the following reasons might apply:

Let's use obsidian for our starting point. Obsidian has been and still is used for knives. These knives are poorly shaped, and in modern times only used in low impact high detail settings. It is unsuitable for making a sword or pretty knife.

Then there's regular pane glass. These shards can be very sharp, but tend only to exist in large but fragile broken shapes. you could create a shaped blade by etching the glass and breaking it out, but it would be very useless and look bad. You could also mold it into the shape of a weapon, but it would risk breaking and hurting yourself and could only be ceremonial. (Depending on the material glass can be a number of colors, but all tend to have the same properties as the most common silicon variety.)

Next we have tempered glass. Oh beautiful tempered glass. Take the mold from the regular glass and make sure there's a wide flat blade with a sharp tip and a sturdy handle. Temper it into safety glass of the highest kind, or at least a moderate temper. the idea is that a wide flat blade can be easily snapped, rupturing the temper and causing the blade to become a bunch of glass shards inside of any assassination target. Good luck saving them. Plus, the handle will crumble away, and provided you wrapped it in a cloth or wore a glove to protect your hand, there will be no physical evidence to trace back to you except a bunch of small bits of glass. If you forget to protect your hand you may get some small cuts.

In Brandon Sanderson's Mistborn series glass daggers were a weapon of choice for certain fighters. The reason was simple: some people could manipulate any metals, thus any metal armour was impractical. Metal weapons were out too for the same reason, so all you were left with were either wooden weapons, or something brittle (glass, bone, etc). Since wood alone isn't that good for cutting, you used glass. And since your opponents typically had no armour, glass was practical even for open confrontations, not merely assassinations.

In other words, make metal unsuitable for combat for some reason, and you will find glass weapons useful.

Of course, those still were daggers, not swords, as you wouldn't want to parry with them.

You said you are interested in it for aesthetics. Therefore, I'm going to go with an answer that explains why glass weapons exist without them necessarily being the most practical weapon. I think the glass sword would be:

The weapon of choice for a gentleman's duel to the death.

Gentlemen have to have a good way to have a duel to the death after all, and when it comes to such things the ideal weapon is a weapon the requires real skill, and not necessarily because it is practical. I'm imagining that in your world a short glass sword (glass dagger/rapier?) has become the weapon of choice to permanently settle matters of honor, and all such fights are fights to the death. The duel itself has evolved to account for the ease with which a glass dagger can break. Some thoughts off the top of my head:

I'm not even a fan of violence but I almost want to watch such a match myself :) Glass swords: the weapon of choice for a gentleman when the court system is not available to give you the "justice" you deserve.

If bullet proof glass exists, then I think there is at least some kinds of glass that can be used as a traditional weapon. Remember that even when using swords, wielders try to avoid clashing weapons. So if the glass is bullet proof, and is only impacting soft flesh as per the 19th century soldier types where heavy armor was not common, then I don't see a problem with using glass weapons.

The technology and manufacturing process might not exist in this time period however.

Mayhaps a "Prince Rupert's Drop type construction so the sword shatters instantaneously into 'dust' when stressed at the appropriate location but, until then, is "reasonably strong". 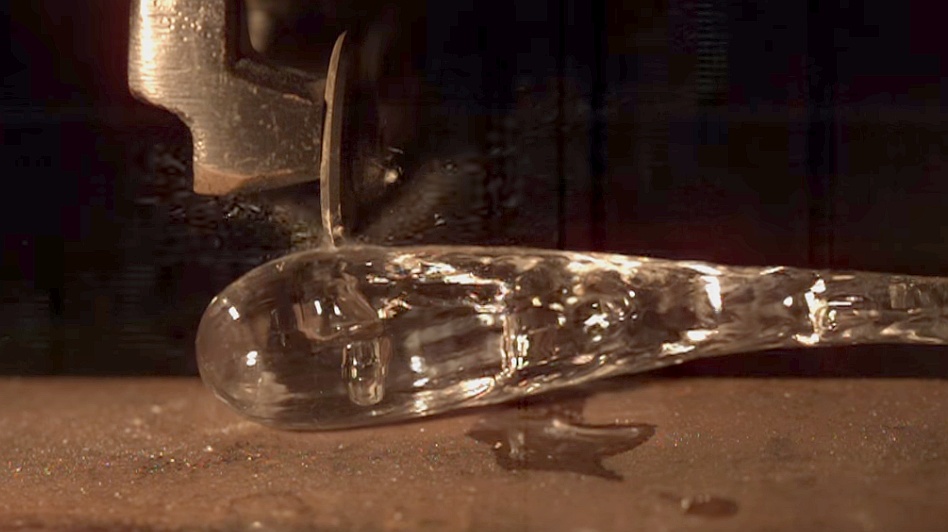 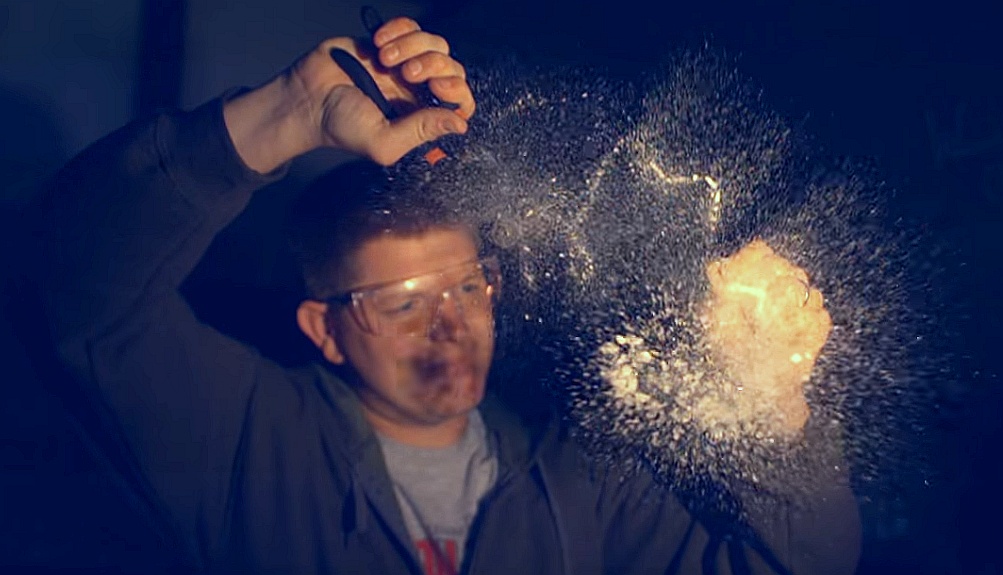 The question was pertaining to swords, but hinted also interest as an assassin´s weapon: As an assassin´s weapon of choice it would do wonders! My history teacher told us about the venician glass daggers. But i could only find references in fiction: for example "The Glassblower of Murano". Maybe an italian speeker can help out =).

The idea of glass stilletos is so interesting because they are expensive to make -> sending a message, take great skill to use -> brittleness, and make the victim suffer,a lot. Since hitting anything remotely hard, breaks the weapon and it is almost impossible to remove the tiny shards completely, also the . Think about a certain Superhero with a magnet in his chest, but the magnet being useless.

Pure glass through and through wouldn't work in the traditional way we use blades, as while its sharpness is very much comparable, the flexibility is nowhere near what steel's is. However! If you slightly change the way you think of swords, the Macuahuitl is a club that has been embedded with obsidian shards and used like a wakizashi (pull edge across skin, not poke or hack). It's not going to survive an actual swordfight without further alteration, but as a close-combat weapon, it would produce deep lacerations if slid over skin or armor.

Glass isnt as brittle as people think. For example I regularily walk passed a door with a glass panel with a 40kg rhodesian ridgeback that throws his full force against it and scratches the glass, but as of yet the glass hasnt broken or scratched.

Using a graph from this PDF, 12th "slide": https://www.google.nl/url?sa=t&source=web&rct=j&url=https://glassproperties.com/references/MechPropHandouts.pdf&ved=2ahUKEwjFjIXi7PHcAhUrM-wKHUnyCFYQFjAAegQICBAB&usg=AOvVaw0b7mMzd29Xp1D6r6uIo7fp

You can see that tempered glass has a yield strenght of 500 while hotrolled steel is 580. That should be close enough for a few glass weapons unless someone has a better idea. Ofcourse if you stretch the definition you could go for anything you can see through and then you can go for very interesting materials.

As far as how useful a glass sword would be, Larry Niven answered the question in regards to a dagger in the short story "What Good is a Glass Dagger", originally published in The Magazine of Fantasy and Science Fiction, September 1972.

Not the answer you're looking for? Browse other questions tagged reality-check weapons assassination or ask your own question.

14
Would a carbonfiber sword/katana be useful?
19
Would a telescoping sword be plausible?
21
Under the right temperature conditions, would a gallium sword be possible/useful?
9
Weapon Design: Nitinol Fire Sword?
14
Glass arrow heads
3
Would a Glass “Rupert Drop” Weapon be Plausible?
3
Dragons are supposed to be glass cannons, what biologically possible weapon would be the most useful for them?