Is there a plausible way to build a pipette with medieval technology?

I'd like for a character in a vaguely medieval fantasy to be able to dispense drops of a ink reliably from a pipette, but I'm not sure whether this is a plausible - the tech level is pre-1500, but it seems that pipettes weren't invented until the 19th century.

I only need to be able to dispense drops; nothing more accurate than that (and so I don't mind which type of pipette is used), but the ink (which is water-based and not heavily acidic or alkaline) is precious and so the pipette needs not to leak or otherwise lose its contents accidentally.

There was actually a natural 'pipette' in regular use during the medieval age: the quill pen. The scientist could take a feather normally used as a quill, cut off the feather, then clip the end of the tip. I would think this becomes almost the ideal pipette with even the graduated narrowing at the exit.

The most basic type of a pipette is an empty tube with a small opening on one end (where the content is expelled from) and a smaller than thumb sized hole on the other end.

You dip the tube into a liquid and cover the upper hole with your finger or thumb. You now have an amount of liquid trapped in the tube. Release your finger very carefully and you allow air to flow into the tube, expelling the same volume of liquid. For better precision, you could make the upper hole very small. 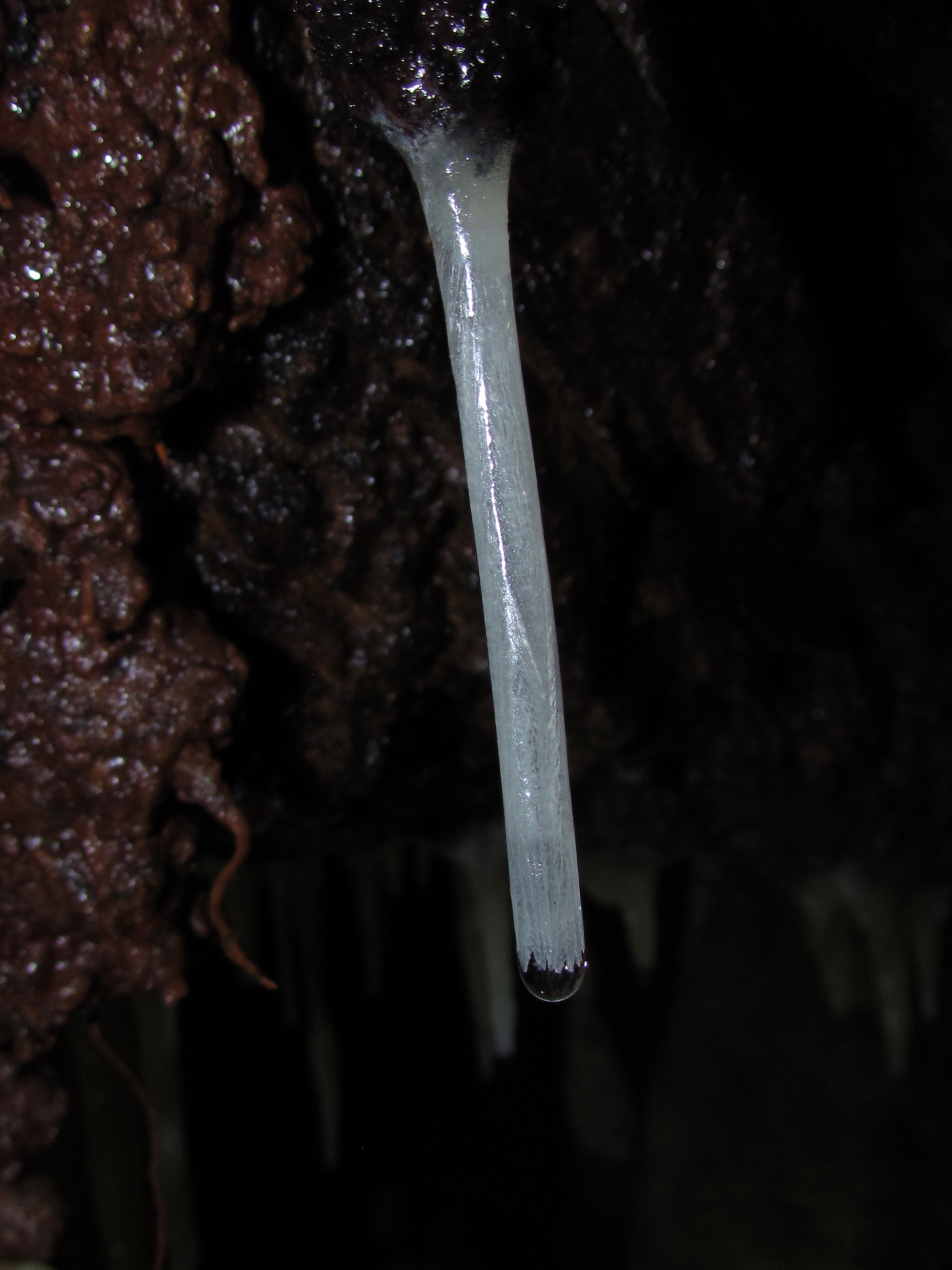 I think the goose quill is probably the most practical approach in answers so far. Practical, shmractical, I say! What about a stone pipette? Soda straw stalactites grow naturally in caves. They are hollow in the middle. They are crystalline marvels, and can be found in different colors and even fluorescent! 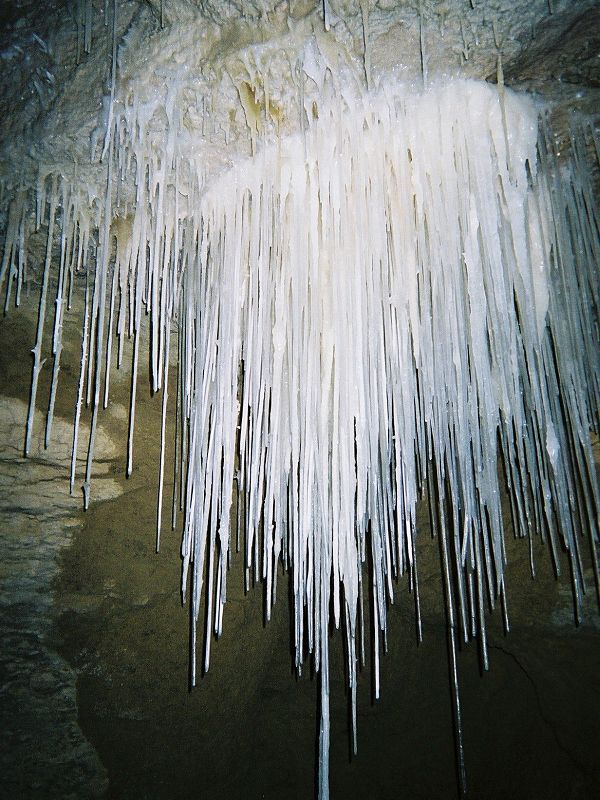 I think good décor for an alchemist lab would be an entire formation of these soda straw stalactites, suspended from the ceiling. The alchemist could break one off when needed.

There really is not much to add from the Wikipedia article...

An early historical mention of what appears to be a reservoir pen dates back to the 10th century. According to Al-Qadi al-Nu'man (d. 974) in his Kitab al-Majalis wa 'l-musayarat, the Fatimid caliph Al-Mu'izz li-Din Allah demanded a pen that would not stain his hands or clothes, and was provided with a pen that held ink in a reservoir, allowing it to be held upside-down without leaking.

There is compelling evidence that a working fountain pen was constructed and used during the Renaissance by artist and inventor Leonardo da Vinci. Leonardo's journals contain drawings with cross-sections of what appears to be a reservoir pen that works by both gravity and capillary action. Historians also took note of the fact that the handwriting in the inventor's surviving journals is of a consistent contrast throughout, rather than the characteristic fading pattern typical of a quill pen caused by expending and re-dipping. While no physical item survives, several working models were reconstructed in 2011 by artist Amerigo Bombara that have since been put on display in museums dedicated to Leonardo.

"But I want a real pipette"

And this video shows how to make a pipette from a glass tube. It really is not much harder than just heating a glass tube in the middle and pulling it apart at the correct rate.

So even if pipettes were not invented until the 1800s in real life, this is more likely because chemistry did not require pipettes until then, than any technological limitations. If your character requires them in the 15th century, then-existing technology was more than enough to make a glass pipette.

A Pasteur pipette should not be difficult to make.

Either with a glass tube, replacing the plastic/rubber part with bladder/stomach of some small animals, or with a straw & bladder assembly, going along the same line.

A smarter solution would be to use the shell of an emptied egg. It has two opposite hole, controlling the opening of the upper one you can decide when you want to release drops from the bottom one (doesn't work wit acid or hot liquids)

What is a pipette?

Others have mentioned that a glass tube and sticking your thumb on the end is very easy, i agree. but i'll add a little extra for a conventional pipette

A long narrow glass tube with rubber bulb at the end, which when air is expelled by pinching the rubber end, and when the glass tip is placed in liquid, and the pressure on the rubber is released. then suction drags the liquid into the glass tube and smaller pressure can release a drop of liquid at a time.

Glass blowing was common in medium to large towns and cities across Medieval Europe, and they would be capable of making a small internal diameter tube glass rod, it may have fairly thick walls of glass but its very doable.

The most likely the way it would be done would be to place a tapered steel rod into a blob of molten glass and then shape the glass around the rod, then as the glass cooled, carefully extract the rod while the glass was hard enough not to deform but molten enough to not stop the rod being removed. it being a tapered rod would make this process slightly easier.

and while rubber in the send of the bulb was not really known, rubber was, so its plausible that it could be done, it could be made out of leather, water skins were common place in medieval times, and they were capable of making leather have sufficient rigidity that it would return to its original shape after releasing it, the only thing i would say is that a leather bulb would not snap back to shape instantly like rubber would, it would re-expand out,so it would not be as quick to draw the liquid. but dispensing it would still be the same, might have to be slightly more cautious, and the leather would probably have to run most of the length of the tube to ensure airtightness.

Yep, definitely plausible, but it would likely be a very expensive item for its time.

I'd use a combination of a tiny thin blown glass tube, a reed, or bird quill, candle wax and either an obviously deceased small animal bladder or oil clothe coated round of fabric,say silk. I'd use thread and wax to keep the 'bulb'connected to the tube of the pipette, and to prevent accidental leakage I'd probably use a wee hot wax pearl to 'plug it up'after every use.

Pipettes have been around since before the 19th century, as the most basic pipette is a simple tube that is filled by inserting it into a liquid, and then covering the top of the straw, relying on air pressure to keep the liquids inside the pipette.

Mouth pipetting was common until the 1970s. Yes, really. Sucking chemicals through a specialized straw was common practice in scientific labs throughout the industrialized world until after man walked on the moon.

All you need is a large enough glass straw with a bulb that has been marked above the bulb. Glass has been around since antiquity. Its not the materials that are lacking in the 1500s.

Not the answer you're looking for? Browse other questions tagged reality-check technology medieval .