Could an animal species fire solid projectiles as a defense? [duplicate]

Projectile weaponry is not unheard of in the animal kingdom - cobra venom, venomous spider silk, velvet-worm slime, scalding water from bombardier beetles, archerfish spitting water, penguins expelling feces and petrel vomit are a few examples that I think of. However, these are all liquid projectiles, and I'm wondering about solid ones. Those are also seen in animals, but are usually limited to either fecal matter or objects from the environment.

Some cnidarians also have nematocysts/cnidocysts, which is probably the closest real-life thing to what I'm getting at.

My question is: could an animal, or animal-like alien, generate a solid projectile (Solely for the purpose of being fired) inside its body and then expel it with speed and force as a means of offense and defense?

If you have any queries, or wish to notify me of an error, please say so in the comments.

Easy projectile - gastroliths. Many animals swallow small stones to aid in digestion. Maybe some sort of bodily function that generates stones thanks to a high calcium diet (or another mineral).

As for the mechanism, as others have said, muscles probably won't cut it. An interesting solution is found in the British planthopper, an insect that has gear teeth on the tops of its legs. They can wind into place, and allow the insect to jump some good distances with great coordination. Some adaptations could allow for similar structures that could process and launch these generated stones.

If continually bothered, the crested porcupine will stamp its feet, whirr the quills, and charge the disturber back end first trying to stab the enemy with the thicker, shorter quills. These attacks are known to have killed lions, leopards, hyenas, and even humans.

Give it a longer tail, and some muscles to detach quills at command. 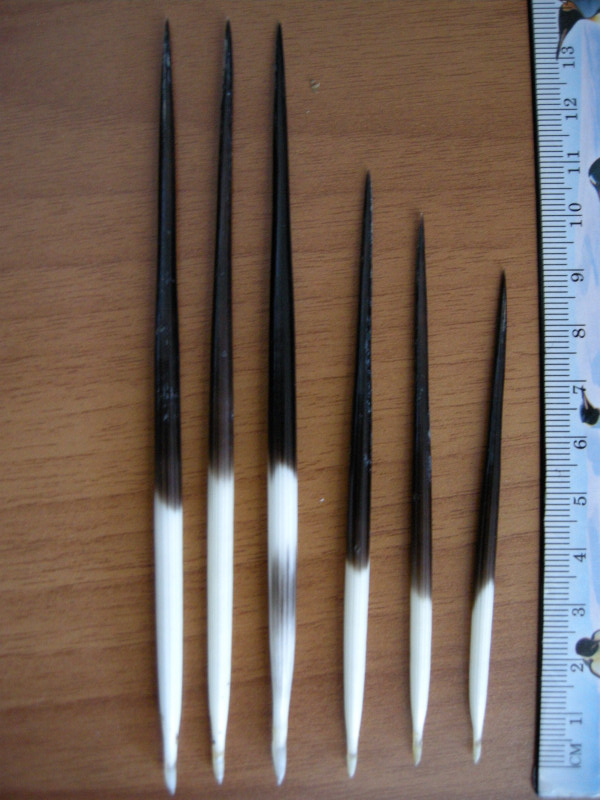 When the animal wants to launched the quills, it just has to swing the tail and activate the muscles with the right timing. The quills will fly like projectiles.

Those quills are known to be extremely painful to extract, due to the conformation of their surface.

Urticating hairs are grown by tarantulas, and can reach a couple millimeters in length. They may be barbed, and have the potential to pierce the skin and cause serious problems for attackers. Allergic reactions have occurred in humans, and require immediate treatment The tarantula launches the hairs by rubbing some of its legs together, which releases a bundle of hairs; this increases the odds that at least one hair will hit the target.

This page has diagrams of several different hair types (copyrighted). Here's a photo of some on a Grammostola rosea tarantula, showing a "bald" patch where the hairs are grown (image in spoiler tags for arachnophobes!): 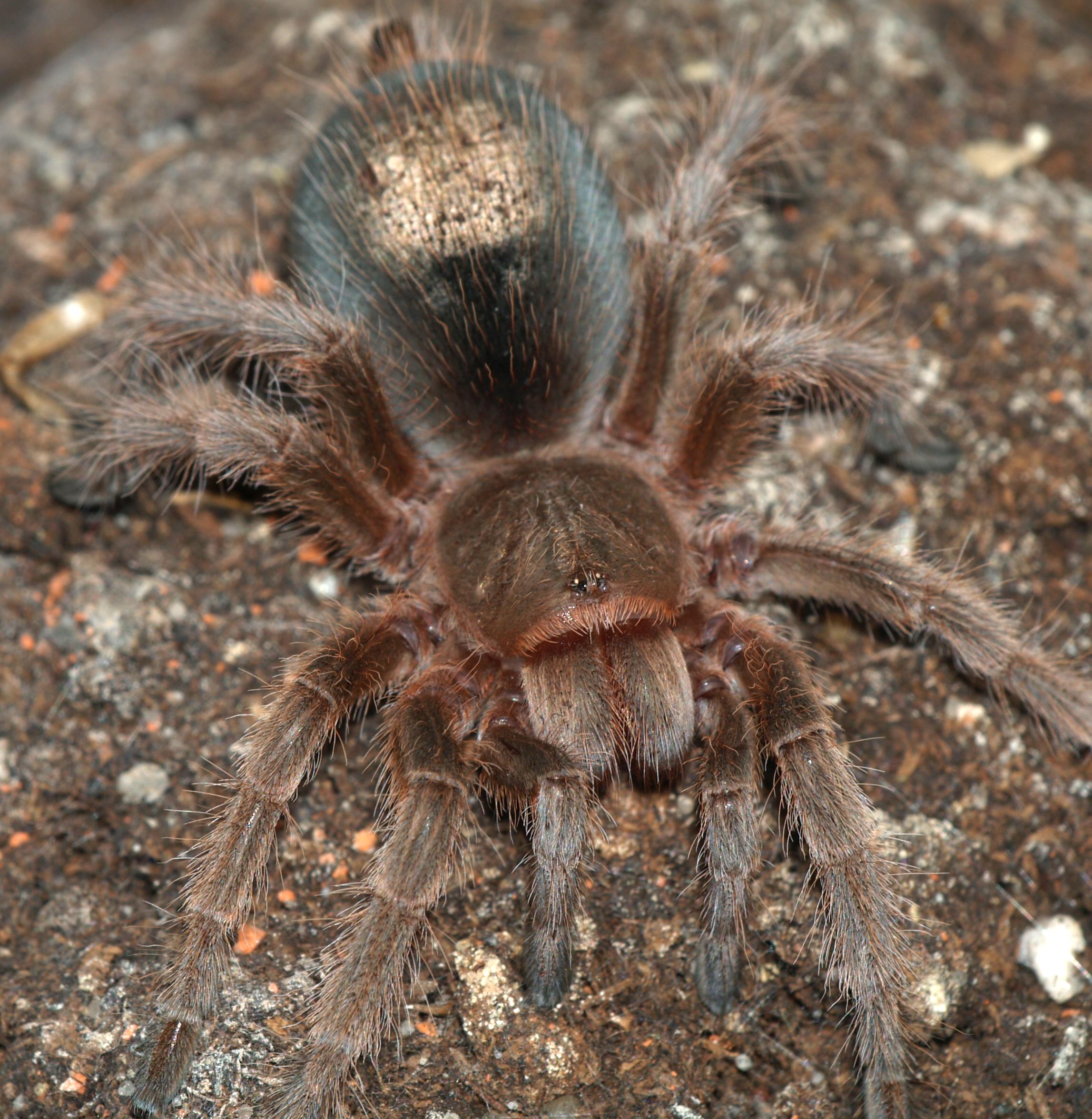 Humans have been attacked in this manner, causing eye damage. Here's a video of what the ejection looks like, in real time.

The nettles of jellyfish are quite like projectiles being shot into the body of any animal touching it. But they are projectiles on a tiny scale.

Other animals use spikes and quills as defence mechanism. The quills of porcupine and sea urchins are even designed to stick in the flesh of attackers, so they are already detachable.

What is missing is a mechanism to launch them in the direction of an attacker. Muscles are probably not fast enouch for that purpose, so you need a lock mechanism that is under constant strain and can be released explosively. Think of it like a bow and arrow: you put constant tension on the string while aiming the arrow, only to release all the force at once by releasing your fingers. Although you excerted all this force with your own muscles, your arm cannot release this force fast enough to throw the arrow.

In an animal you could attach tiny tendons to the quills that are connected to tiny muscles. Aggrevation causes the animal to tense up, straining the tendons. If the tension gets too much, the tendons rip, catapulting the quill straight from the skin.

The disadvantage (and probably the reason why nature prefers liquid projectiles) is that quills, muscles and tendons take much time and energy to regrow. Reproducing a liquid requires much less time and resources, thereby offering higher chances of survival for the animal.

Pellets could be an option, mostly birds just cough them up as necessary and discard them but they could be spat at a predator/prey/intruder.

Another option that I find personally disturbing, because of the creatures that use it on Earth, is hairs/skin grown spikes. If you are arachnophobic don't follow this link. Tarantulas have specialised hair like growths that they kick off their exoskeletons at predators, or anything else that intrudes on their territory, these are deliberately sharp and barbed so they stick in and irritate the skin, they also tend to get infected where they stay embedded, not sure if that's by design but there are ways to make it so it is.

I can present you thoughts, but not a clear answer:

Not animals, and not for offense, but there are plants with projectile seeds, e.g.

Here's an evolutionary approach. Originally an egg-laying species could expel eggs as a way of distracting and escaping predators who would then feast on the egg.

Over millennia this egg-expulsion could become faster and more powerful. The egg would be projected into the predator's face thus temporarily blinding it.

Ultimately the shell would become thicker and thicker until solid eggs were produced and 'fired' at high velocity that would render the predator unconscious or injured.

This is the closest real-life example I know of.

With venomous snakes, their teeth fold back into the mouth, and if they break they grow new ones. It could be that the creature has a similar mechanism, but that the "fangs" launch instead of just folding out to bite. If the projectile is in the mouth, it may be easier for the creature to aim?

Not the answer you're looking for? Browse other questions tagged reality-check biology creature-design fauna natural-defenses or ask your own question.