Dragons, or wyverns, are of course creatures that fly, that are fierce and can participate in dogfights against other dragons. I wouldn't be surprised if in a fantasy world humans domesticated dragons to use as early "airplanes".

So in a scenario I have in mind dragons have been used by few western countries as "airplanes" in their army. They have a special scarf that determined what country it fought for (for instance a blue, white and red scarf would mostly be French, add a yellow color and you will have the one of the Russian Empire, black and white would point at the Prussians and black, white and red the German Empire etc.).

But then the 20th century comes... and WW1... and guess what we have during WW1? The first main usage of airplanes in war.

However in WW1, airplanes were a tad simpler, being a bunch of fiber, sticks, bars and equipment carefully assembled to create a suitable flying machine. Sometimes I heard that the pilot even should pull out his own gun and shoot at the other airplanes. Also WW1 era airplanes are slow (compared to modern aircraft).

Which begs me the question:

Can dragons at least survive if they were chased and caught in a dogfight by a WW1 mono/bi/triplane? Would that be even fair in the first place?

Taking on a dragon one to one with a WWI era fighter is not going to go well for the pilot, but WWI pilots quickly adapted to the conditions of air warfare at the time and become far more dangerous.

WWI is where most of the techniques used in modern air warfare came into effect. Flying with a wingman to maintain all around situational awareness and protect your flanks came early, then formation flying (the Germans became particularly good at this, von Richthofen led a "Staffel" known as the "Flying Circus" into battle, and won most of his victories as a squadron commander, not a lone wolf)

Other technical developments like two seaters with machine guns mounted in the rear seat as well as over the engine deck were quickly developed, and the French even had fighters carrying rockets into battle. 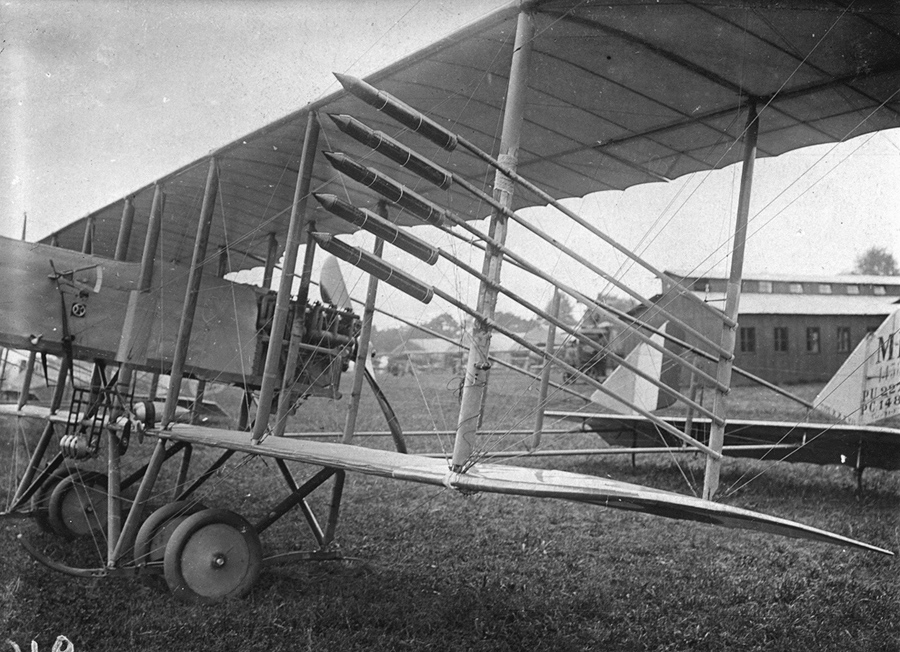 Flying out of the sun, and flying "nape of the earth" were also techniques pioneered in WWI.

In summary, against dangerous air platforms like dragons, WWI era fighters would rapidly develop techniques to negate any advantages dragons have, and more rapidly develop weapons, high powered engines and other technological advances needed to level the playing field. 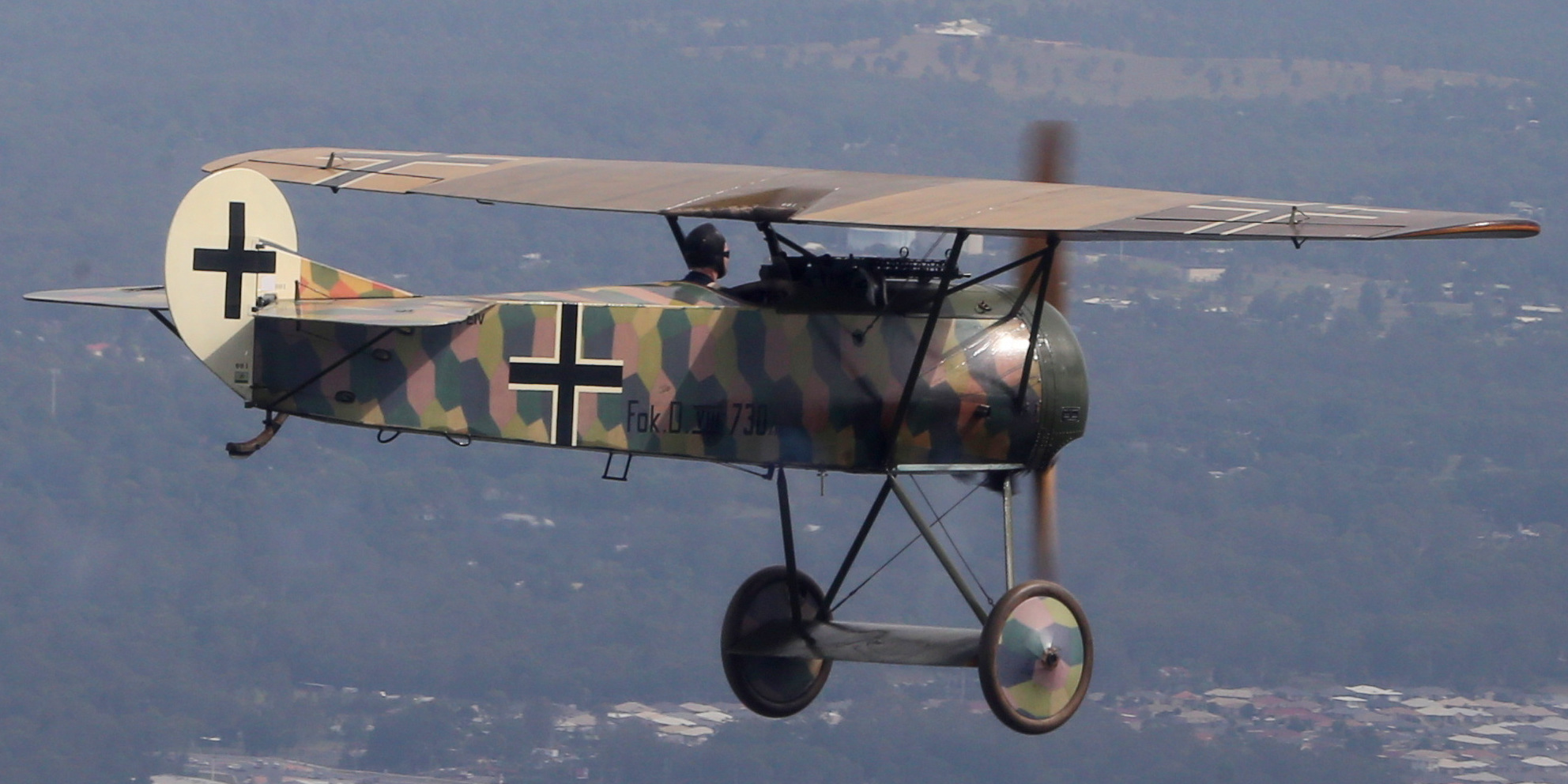 Replica Fokker D VIII. This was the most advanced fighter of WWI, and if the environment had demanded something like this, it might have been developed much more quickly, coming into action in 1916 rather than late 1918

If biplanes were created in our dragon-free world and somehow then came in contact with dragons, it is the biplanes which would be slaughtered. Natural animals (and dragons) evolve in a competitive environment with each generation better at surviving than its parents. A barely flying contraption of balsa and silk with a single fixed distance weapon, no claws and a primate pilot which didn't evolve for aerial combat wouldn't have a chance. The dragons would simply attack from any direction except directly ahead where the fixed gun is.

But in your world, biplanes wouldn't have been created for dragon free skies.
If they were created at all, they would be more armed, armored and dragon-ready than their more-peaceful real world counterparts. The features of that more aggressive, predatory biplane need to be imagineered prior to a more concrete discussion of dragon vs biplane combat.

Dragons will likely fall out of military use quickly

An average dragon can probably take one or two early planes easily. But, planes have a few decisive advantages:

As any RPG player will tell you, there are multiple traits that are required to achieve superiority in a combat situation. For the purposes of this question, we'll focus on two; agility and attack strength.

(This answer does indeed constrain itself to technology available at the start of WWI, as that was my take on the context of the question. I concede that technology advanced rapidly and would do so against dragons as well, but I'm also taking that as out of scope for my answer.)

WWI fighter planes were not fast, I grant you. But they had one singular advantage over modern aerial combat platforms; agility. Because they were light, they could almost spin in the air and still remain aloft. This meant that any weapons they had on board were more capable of hitting a target. But, as you rightly point out, here we come to their weakness.

Their weapon systems were almost laughable. Synchronising machine guns to the propellers so they didn't shoot themselves down wasn't something they had mastered at the time, meaning that weapons weren't forward facing per se and they had significant issues with getting any serious firepower up there with them. In point of fact, it wasn't just pistols they fired at each other; there are some rumours that they carried grenades and even molotov cocktails in an attempt to bring each other down.

But, what about our dragons? Well, they have some agility in the air, but probably not the same as the planes. What they do bring to the party is firepower. Their flame breath, if they can hit a plane, would wipe it out completely.

So; you have one combatant that is agile, can stay out of the way of attacks, but has low attack points of its own. Another has massive attack points, but is a large target for an agile pilot. Who wins?

Ultimately, the winner is the one with the best strategy. This is one of those cases where having a plan that maximises your own strengths and your enemy's weaknesses is more effective than just focusing on your tech.

Wars really are won by generals and leaders; A good strategist who intimately knows the enemy and therefore knows how to exploit their weaknesses is going to win every time. In this case, the mismatch cannot be decided by terrain as both oceans and skies have no terrain to speak of (I'm ignoring ocean floors here obviously) so strategy is the only difference.

In short, there is no clear winner in terms of platform in this matchup; you have to decide which side has the better strategy for yourself.

You may want to check out the Temeraire series by Naomi Novik. It's set in the time of Napoleon, where dragons are sentient, and used in warfare. The larger dragons carry entire crews. They can take damage from guns, pistols, and even canons (up to a point, obviously, they aren't invincible).

It's certainly imaginable that large dragons, with thick natural armour can give WW-I airplanes a run for their money. WW-II planes becomes harder, dragons would not have the speed, but they have a much better agility and should be able to drop their speed; even come to a hoover. They can out maneuvering planes.

It's hard to imagine dragons having a chance against modern airplanes who can go faster than sound, and have the ability to use guided missiles as weapons.

Lots of good points but missing a key point, I think. The Dragons won't be reliant on just their claws, firebreath, speed & agility. They will have human riders, crews ...spotters, archers/shooters, grenadiers, bombardiers. In a world that had dragons that were domesticated/trained /allied with humans ...the arms race would have involved breeding of dragons over course of centuries. Many variants would be bred & they would exist in large numbers as continual warfare over the centuries necessitated. There would be specialised dragon breeds for Heavy Bomber, 'Gunship', Trooper (Paras/Marines) variants, Medium fighter-bomber hybrids, Light Fighters, Super Light dragons for Scouts, Couriers, Spotters. etc.

In this world it is hard to see the first planes ever getting a foothold as they would be small, flimsy, unarmoured, in small numbers at first. A lot said about how guns would outclass dragons' firebreath while forgetting that in evolution of dragon vs dragon aerial combat, ground attack & ship vs dragon warfare, all possible weapons would've been lofted over the years using the Dragon as the platform. From early archers, spearthrowers, rock droppers to later mounted heavy bolt throwers, rock slingers, primitive molotovs/bombs etc. Dragons would have different levels of natural armour augmented by human-tooled armour as well. I think the planes would get laughed at, smashed down then forgotten. Airships & later passenger/cargo planes too probably wouldn't arise as someone would've figured out how to train/co-ordinate a team of two, four, six dragons or just use one-super-massive to hoist passenger carriages & cargo pods/capsules. Dragon & Carriage would be as normal as horse & carriage. Once again that would've arisen out of practice of war as Army/Navy realised usefulness of dragons to carry troops, supplies, heavy weapons to the battlezone. Dragons would've revolutionised Naval war as Ships used dragons to scout, screen, long range attack & provide air cover/defence from attack from the air.

So to answer the question ...no it wouldn't be fair ...to the little planes & their pilots/co-pilots. Outnumbered, outgunned going against a well-developed dragon-based military tactics/strategy & doctrine with the large infrastructure supporting dragons.

Not the answer you're looking for? Browse other questions tagged warfare dragons aircraft .