I'm building a colony that is an unintended eclectic museum of simultaneous, anachronistic stages of industry: Industrial, Machine Age, and Atomic+ (onward into more esoteric, advanced technologies that are strictly regulated for the sake of social experimentation).

Prior to the construction of a pipeline, road, or rail networks and other transportation, I intend for zeppelins to be used to travel between coastal desalination plants and back to the main city. In addition to delivering drinking water, they would dump some of their water while passing over designated farmland to irrigate the crops, and if needed, also transport and dispense necessary fertilizers, insecticide, etc.

I guess some would also stop at isolated plantations/farms to gather produce and deliver packages or necessary supplies for farmers and agricultural laborers.

This is only intended as a temporary solution until proper transportation and irrigation infrastructure is built...so I can explain the existence of a retrofit fleet of zeppelins being weaponized later...

Edit: Alright, probably unmodified, antiquated zeppelin designs are a miserable idea. Perhaps just magnetoships that use bags of lighter-than-air gasses to stabilize them, and appear aesthetically like antiquated zeppelins? Ach...But then what are all the problems with magnetoships that I don't know about? Or rather: What's a good freight vehicle that can float in the sky like a zeppelin?

And now I'm intending a scenario or circumstance in which there is an obstacle that prevents the simultaneous development of infrastructure alongside the construction of the coastal desalination plants:

"We need water. We need more of it than what's falling out of the sky. It's over there. There's something nasty/loathsome between here and there. So we went over it." It can maybe be a lake/river and its respective filtration/purification plant, since people keep yelling at me that desalination is a dumb idea.

Untamed wilderness...Voracious indigenous organisms...Obstinate xeno-druid roadblocks...What would stop a bunch of salty blue-collar humans in high-vis vests and hard hats? A lot of things I'm sure, but enough that it just makes sense to fly over it in the meantime...instead of say, call in someone to fight it (due to anticipated, constant harassment or guerrilla tactics).

Ugh, but now I've forgotten about the farms I wanted to irrigate with fly-by's...

Edit: Consensus is that fly-by irrigation is impractical, but could I perhaps just have water stored as freight and offloaded at designated stops (plantations/farms) via a simple tower of pipes sticking up in the air, probably connected to a water tower or something? A stable docking procedure is probably required.

Your planet might not have the same atmospheric conditions as Earth, or you may have some magical elements available to fill a zeppelin's lift envelope; you don't specify. But assuming Earth-like conditions and Earth-like zeppelins, irrigation by zeppelin is very impractical.

The famous (for burning) Hindenburg had the largest envelope volume of any airship. It generated about 216,000 kg of lift (I know, the units are wacky) and had a mass of ~206,000 kg. So, it could only carry about 5 tons of payload, including passengers and what have you. By comparison, a Boeing 777 can lift over 50 tons, depending on the model.

Fertilizer is heavy; water is even heavier. A corn field in Illinois might use 150 lb of nitrogen fertilizer per acre for a season. A farmer's bulletin recommends a similar amount of potassium (137 lb) and phosphorous (134) addition. These fields also average 191 million gallons per day for 601,000 acres of irrigated crops. That is just over a ton of water per acre, per day.

You're going to need a lot of zeppelins, at modern farming fertilizer and irrigation usage rates.

The only way I see a Zeppelin working is if it's extremely hard to get to the colony on foot and you have enough resources to warrant the building of the colony and open up new paths.

For example, let's say you have two Cities on opposite sides of a huge mountain range. There are paths between each city, but they have to go around the mountain range (and assuming the straight line distance through the mountain range will still take more than a day via your main form of transportation). The paths are so long that zeppelins are viable in transporting cargo over the mountains (They transport less, but get there quicker and more reliably(?)).

Now both cities could invest in building a path between the two of them through the mountain range. Assuming there was an almost ideal settlement area in the mountains, then your scenario might work. The cities start mining from each of there sides. They use the zeppelins to move supplies, materials and manpower into the mountain range to start construction work before the main crew gets there. Assuming a suitable location about half a days away, they start the construction of a city, using zeppelins to supply materials and manpower while proper transportation lines are being constructed. 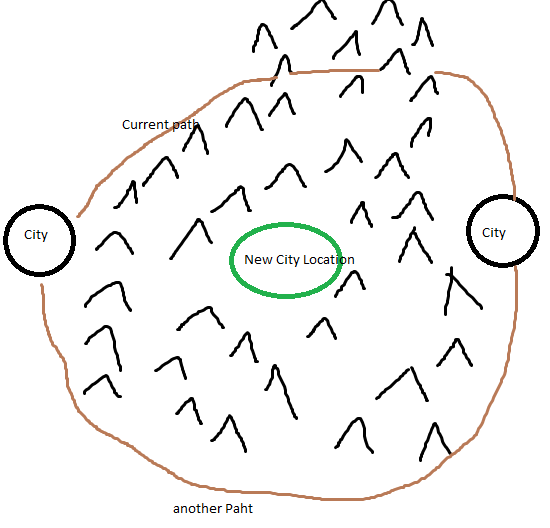 In addition to the issues of lift and payload capacity, Zeppelins and other LTA craft are essentially giant sails, and have great difficulty in flying in high winds or heavy weather conditions. This led to the crashes of many airships.

From a practical point of view, the act of using an airship as an irrigation system would involve some pretty difficult flying, since you want to place the water "on target". The airship is moving slowly over the field, but the pilot needs to account for shifting winds, changing weight (the airship will become lighter as the water is delivered, and want to rise, while the pilot will want to remain relatively low to the ground).

Utilization will also be horrible. Turning about at the end of the field will take a long time, then trying to line up and fly the next section of the field will also take a very long time. You will spend an inordinate amount of time trying to water just one field. Even watering the field with a cropduster would make more sense in terms of time allocated.

Air delivery of water can take place, but using fixed wing aircraft like "water bombers", or helicopters to deliver water via bucket lift. If there were no other real alternative, the would be a very expensive way to irrigate a field.

Practically, Zeppelins are a pain. Even the ones filled with helium have all crashed in bad (and by "bad", I mean "high winds") weather.

Not the answer you're looking for? Browse other questions tagged colonization agriculture or ask your own question.