How to avoid cursing myself with my black magic? [closed]

Let's focus on a curse named "I rot your life." For this curse I need human leather of a tormented soul, magic ink and very bad vibes. I already have the materials. Each rune only works once and becomes harmless after its use.

For this magic to work the victim needs to see the rune at very close range. Sadly the curse affects anyone who looks at it and is very complex to draw, so I can't close my eyes while working on it.

How can I use my black magic while minimizing the chance of cursing myself by accident?

What you want is a Pantograph. This is a device used to scale images up and down. It also lets you work in one space while the real rune is in another. 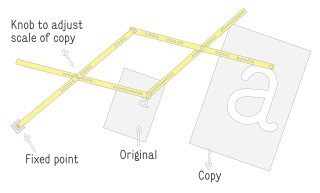 You mention that the rune takes all sorts of exotic materials, so if your original is just a piece of paper, it should not trigger the effect. Meanwhile, the copy is your exotic rune material, and you keep it under a cloth or in a box so that you can't see it by accident.

Write a rune that writes curses

Carve your design on a single wooden block. Cover it in ink, or create a portable ink pad, and you will be able to print designs without even having to look at the design on the wooden block or the tortured leather itself.

If you wish you can break your rune down into seperate blocks and apply them in sequence; this way accidently looking at any one of the blocks carved design won't leave you cursed.

Block printing has also been extensively used for decorative purposes such as fabrics, leathers and wallpaper.

If the same rune on different surfaces causes different effects, then simply cover the surface that you don't want to look at with something thin, easy to cut, and that doesn't cause deleterious effects when you inscribe this rune on it.

For example, cover the leather with paper, then carve the rune. You will be looking at a rune carved in paper, which will not cause a curse. Then, close your eyes and remove the paper. The next person who looks at it will get cursed.

You mention both carving and ink, and this could work both ways. If you want to ink the rune onto your surface, place the ink between two pieces of paper, and cut through them, imprinting the ink only along the cut edges.

Another answer suggested using a telepresence rig with a camera and a remote controlled robot arm to avoid looking directly at the rune. That answer is probably deleted since it was advertising for one particular brand of telepresence rigs.

A more medieval-appropriate version of the same is using a mirror. (I automatically think "medieval" when I hear "magic". This may or may not be relevant to you)

Put a screen between yourself and the writing surface, and a mirror so you can see what you are doing.

This has two advantages: First, you will be only looking indirectly at the rune, which might be relevant to effect. Second, you are seeing a mirror image of the rune which is likely to have a different effect, if any.

Of course, writing while looking in a mirror will require a lot of practice, but you can do that practice on non-magical materials.

Signed runes don't harm the person who signed them

Magic-users who craft runes will typically include their own personal seal into the design. This has the effect of protecting the creator from their creation, both during the crafting process and after. The creator can't trigger the effect on themselves, so seeing the rune during its creation isn't a problem.

Signed runes have the added benefit of preventing anyone else trying to copy your runes without understanding how they work. At best they might make a working rune, but if they tried to use it against the original's creator, they'd find it quite ineffective.

Another magic-user creating a rune with the same effect must come up with their own version which includes their own seal. The resulting rune will be different in a few details, even if the overall design is similar.

Unsigned runes would exist, too. They could be used against their creators, and copied far more easily than signed runes. Apprentices would first learn from their master's simpler, unsigned rune designs, before learning the underlying principles and thus how to make more complex and powerful effects.

Perhaps cover parts of the rune while you are carving other parts. Make a leather cover and carve a two-by-two inch hole in it and move it around while you carve the actual rune. You'll only ever see a bit of the rune at a time, which I assume would not be deleterious, as you aren't viewing the entire rune.

Do it in the dark.

You can practice all you like beforehand using regular leather or the wrong components, until you get it down.

Then, find yourself a dark room, draw the rune, and then slip it into a cover until you need to use it.

This method also has some story potential: how does the wizard know they drew it correctly? Or perhaps someone turns on the lights and curses the wizard forever, either accidentally or on purpose.

6
How to avoid magic from affecting society's technology?
43
Handling magical rune script copyright
9
Figuring out the math for the Sphere of Meteoric Conversion
3
How can two different creation stories be of two completely different religions yet be so similar
12
Figuring out the Cosmic Compass (Updated)
8
Magic and Language Problem