How would I relay information on a screen to echo-location utilizing sentients?

Since they don't use sight to relay information to their brains, how would information on a computer screen be displayed in a meaningful manner? Would this hinder the advance of my civilization?

Assume that my creatures have two arms, eight fingers per hand, and otherwise are physically very similar to us.

No Screens At All. They would use sound devices that create echolocation signals that they can then interpret and work with.

Since these are native to this species, there's no reason that they'd even consider screens to start with. Instead they'd just adapt and expand speaker technology once they developed it - even if they were behind us in other areas, their sound tech would probably be extraordinarily advanced compared to ours (audiophiles rejoice).

So rather than a display, or a screen that changes shape so they can detect movement, they'd just have speakers that send out signals that they interpret as information/displays. Basically they'd cut out the middle-man - instead of devices that reflect sound, they'd just generate the sound directly.

If you wanted a direct correlation, I would suggest instead of pixels, your computer screen would have a matrix of little needles that get pushed out or pulled in in order to create a 3-d representation of whatever information is being relayed. This system would probably not be able to match the resolution of modern monitors, and its usefulness would be directly proportional to the accuracy of your aliens' echolocation abilities, and it would probably be very hard to build/maintain/repair, but I think it could work.

For something a little different, I'd suggest looking into computers for the blind; I'm sure there are many solutions that people have already thought up for visually-impaired sentient beings.

EDIT: Another solution would be to fool the echolocator's senses. Much like how a pixel is just a red light, a blue light, and a green light placed next to each other to give the illusion of all colors, your echolocators' 'screens' could be special stereos that play sounds that 'look' like images. Basically, they return sound from different directions at different rates, just as you would hear when sound bounced off of real-world obstacles and came back to you (in this case, the obstacles would be virtual, like virtual images on a screen). This might take some training to do, and ambient noises would throw the whole thing off, but if you're used to this technology from birth you could probably just throw on a pair of noise-cancelling headphones and go to work.

In short, you couldn't use a 'screen' since they don't have the ability to perceive colors, and so the information displayed on a computer screen would be completely useless to them. You need to invent a different kind of display.

Depending on the granularity of their echolocation, what sort of display they need is very different.

If they have standard Earth-animal echolocation and use a 'ping' in order to echolocate, then they will have very basic echolocative acuity that can tell how far and in what direction something is from them. In this case, you need a completely different way of communicating information from a machine. You could use sound to 'tell' what is happening, or possible a tactile display (information rendered by altering the texture and shape of something they are touching).

If they emit a drawn out burst of sound, then they may have a finer degree of acuity in what the 'see' with echolocation (think Daredevil-like 'sound vision') If that's the case, then the texture/shape design I mentioned for something they are touching could be expanded for their echolocation to view.

That said, the amount of information that could be transmitted that way would be vastly inferior to the information acquired by sight.

So, yes...I feel this would impair their society's ability to build computers. In fact, it would impair a lot of things for the society. A sightless race would have no real way of comprehending outer space as any echolocating signals they sent 'up' would simply vanish.

EDIT: Here is another option if you still want something 'visual'. Use a dense array of speakers that are timed to project sound to the viewer in such a way that their echolocation perceives the sound as being something physical...basically allowing for sound-based holograms. Again, you are limited by the granularity of their echolocation, but it's an idea.

If I were them, I would do it like this: 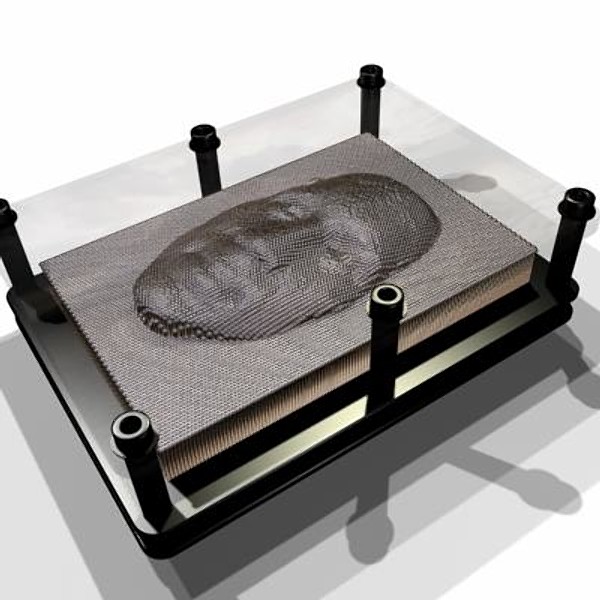 Of course you would need to remove the front face plate, stop the pin backs to prevent them from pushing through and put tiny actuators behind each pin. Not easy, but actually, still not as hard as making a working television screen/tube.

Not the answer you're looking for? Browse other questions tagged technology civilization computers or ask your own question.

10
How could a blind alien race interpret video broadcast into space?

16
How would technological progress occur in a society that outlawed computerized technology?
74
How would an aquatic race develop computers?
11
How fast could a civilization advance if given access to information from future?
17
How viable would an analog computing revolution be?
2
What is the place of human civilization between warring alien civilizations?
18
The Information Desk provides all sorts of Information; how did it work?
6
Most effective melee weapons for arboreal combat? (pre-gunpowder technology)
3
In a 'Zootopia' situation who's in power, the Elephant or the Mouse?