In the National Geographic mini-series Extraterrestrial or Alien Worlds, they featured a hypothetical gas giant moon called the Blue Moon. The Blue Moon orbits a binary star, has a very dense atmosphere with lots of carbon dioxide and oxygen, and a slightly lower gravity than Earth. 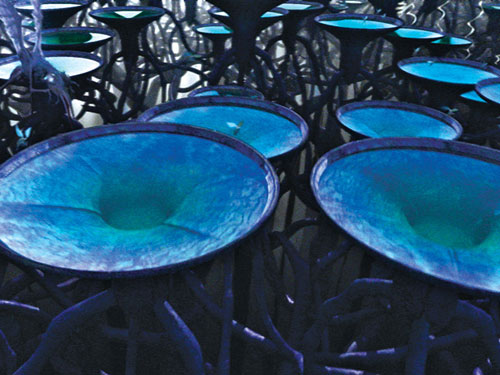 Instead of drawing up water from the ground and having to pump it upwards, the pagoda trees collect rainwater in "sky-ponds", and are interconnected so that they do not collapse. Because they can just let gravity do its job, they can grow very high, up to 1 kilometre in fact.

My question is: Could trees that collect water like this grow to be 1 kilometre tall? Are there any other inaccuracies or implausibilities with these plants, perhaps in relation to the atmospheric conditions given?

Bromeliads are a group of plants which gather water in much the same way as these pagoda trees. You can see the central tank with water in this image. 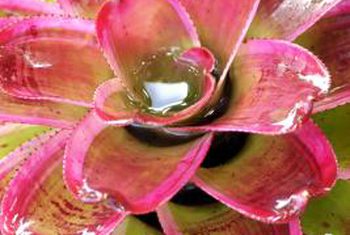 Some bromeliads have also developed an adaptation known as the tank habit, which involves them forming a tightly bound structure with their leaves that helps to capture water and nutrients in the absence of a well-developed root system.

Bromeliads need to do this because their use their roots to hang on and that is about it. I could imagine on a rocky substrate where there was no possibility of finding water, the ancestors of pagoda trees would spread out laterally and catch water like a bromeliad. Just as for photosynthesizers a small height advantage means shading your neighbor / eating his lunch, so too a slight height advantage would mean catching water before it landed on your shorter neighbor. There ensues a race to the sky, as with rainforest trees.

Why would the trees interlace and "cooperate"? Maybe it is happenstance. Or maybe huge patches of these pagoda trees are actually a single organism - a huge multitrunk organism like Pando the giant clonal aspen tree(s?). In the latter circumstance one might see a small no-man's land between individual clones because unrelated trees cannot interconnect.

Super high trees in low gravity / dense atmosphere world - why not? A cool thing would be if the trees used floats like giant kelp. Buoyant structures full of some lighter gas would be neat. Maybe these trees sequester atmospheric argon and use it for their floats.

No mention is made of energetics; I will assume that to be outside the scope of the question.

I see in the image there is some vaguely cthluloid critter perched on the edge of one of the trees. That tree top must be made of stern stuff to not tip at all with that thing on it.

Bromeliad tanks are full of life. The bromeliads must have some adaptation to discourage mosses and other freeloaders that want that water, but frogs and crabs and all sorts of things hang out in the fresh water. So too the pagoda trees.

Life is very varied, and if anything teaches us about life on Earth it is that anything is possible, but this is different to being probable.

My question would be: How would such plants evolve? What did they evolve from?

Presumably the events that have occurred on the Blue Moon is the same events of that of Earth - a spark of single celled life, invention of photosynthesis (and thus plants), a great Oxygenation event and perhaps sexual reproduction to push evolution to its current state through sexual selection, and a symbiotic balance of perhaps animals and other carbon dioxide producing mechanisms to create an environment of stability in which advanced species like this could evolve.

It is true that capillary action from the ground limits the height of trees, access to water top down would reduce this impediment. A kilometre is a long way though, one would expect stability to be a major issue (especially for the first) - I would not expect this likely unless gravity and wind is a lot less.

Also, not sure of the utility of the elevated lily ponds evolutionarily, besides that of obstructing your neighbours access to light to give you the best advantage possible. However if this was the case, others would grow taller to compete with you, I would expect the plants therefore to be jostling and quite varied in heights, eventually reaching an uneven, but dynamic, loose equilibrium (much like the Congo in Africa).

Evolutionarily, there would be a varied and divergent series of other species either along the way or in parallel, these would also compete for light too. Like the Congo, it would result in a morass of different colliding species, for which this would be only one.

It depends how tree like these trees actually are but potentially yeah that could work. Trees on Earth have a vertical growth limit which is pretty much the maximum height of the biggest trees currently around, the giant sequoia, 130m. Beyond that water costs more energy to raise than what the plant gets from the leaves/needles that the water supports, but it's not a limit based on structural strength. Structurally, at least in theory, there is no growth limit; so with top-down water sourcing it could work for large structures that are biochemically identical to Earth's trees if they were big enough. It'll work even better with something a bit less Earthly, a tree that uses silica as a tissue stiffener could have far greater compressive strength making the 1000m mark easier to reach.

From watching the movie (through Youtube), I wondered the same thing: The pagoda tree is extremely high, and the winds are strong due to the dense atmosphere and long day/night cycle. I see all the pictures depicting entangled branches. This may be a strategy to deal with the strong winds. The branches do not diverge from a main trunk, but split and re-join forming a space frame instead. It may be possible the whole structure is not a single tree, or a single trunk, but a colony of interconnected trees. (A single trunk holding this against the wind will be useless)

A second point to consider, is capillary action: All trees on Earth, from grass to the giant sequoias of California rely on capillary action to draw the water from the roots up to the leaves. This may work up to a certain height, and an upper limit for capillary action does exist. I couldn't find that number but I suppose the pagoda tree did exceed it. Beyond that limit, the tree has to adapt an epiphytic growth habit: The leaves will catch water and nutrients just like the bromeliads depicted in the picture above. It is amazing, but ordinary plants may also catch water through the leaves. Do a simple experiment and put a wilted branch inside a bag and seal it. In a few hours you will notice that the leaves have been restored to their original condition. Foliage feeding, is another technique to mist water with dissolved fertilizers on the leaves, and plants seem to benefit from that as well, so most plants may draw water and nutrients from their leaves to some extent. Epiphytes have taken this to a higher level.

Not the answer you're looking for? Browse other questions tagged biology xenobiology flora bio-mechanics or ask your own question.

4
Growing blue trees
12
What would be the psychological differences between a human and an intelligent detrivore?
26
How to kill trees?
16
Are plastic plants plausible?
11
Plausibility Check: Territorial Trees?
30
How would trees communicate?
27
Would glacier 'trees' be plausible?