I have a humanoid species that developed a third eye in their forehead and was wondering what could be the reason they evolved this way or what advantages it would bring?

The third eye can have different properties than the other two. Many reptiles and amphibians possess a parietal eye which is unable to detect anything more than general light level, but is never "closed" and helps regulate the animal's circadian rhythm.

Maybe a third eye could be extra-sensitive to motion. If the creature is asleep but is approached by a predator the third eye can alert them.

Or maybe it could detect a different wavelength of light, like the pit viper's infrared vision (which requires separate organs from their regular eyes, due to infrared's long wavelength).

Here are my thoughts...

One major disadvantage I can think of is that the eye takes up space in their head. The center of your forehead (if I'm not mistaken) has your pituitary glands right behind it. Also, the prefrontal cortex (the rest of your forehead) has been correlated to moral reasoning. So, without a significant change in the layout of the person's brain, the extra circuitry to handle this eye, and the eye itself, will do one of two things. It would either put pressure on that part of the brain, making them very tall, or mean the removal of that part of the brain, making them very short and ill mannered.

Eyes come in many forms throughout the animal kingdom, and two eyes are for losers.

See those bumps in the circle? These are called ocelli: 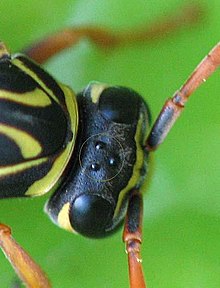 Almost all animals have eyes of some sort, and ocelli are among the simplest. In addition to their pair of large compound eyes, many insects (particularly flying ones) have dorsal ocelli on the top of their head.

Each dorsal ocellus contains a layer of photoreceptor cells on the inside and a curved cornea, or lens. However, they cannot form an image, they can only "measure light". If the refractive capabilities of the lens were improved, it could potentially detect form.

Why would this evolve? Perhaps the animals with both eyes and ocelli had some kind of voracious aerial predator, which they needed to detect. Savannah grazers have a long face so they can feed and watch for danger simultaneously, so this animal could have a similar requirement. It needed to eat something on the ground that it had to watch (prey?), but it also needed to watch for predators.

Now we have a creature with two eyes on the side/front and 1 on the top. Later, the creature becomes an apex predator itself, and gets stereoscopic vision. It is now a primate-like creature, inhabiting the understory of a vast jungle. And, just like Earth primates, it has a very prominent brow ridge. However, it hunts creatures from the upper layers of the jungle, and must constantly be watching above. Since the ridge prohibits looking up much, the third eye is used for watching the canopy. Without any flying predators, it needn't be on the scalp, and it migrates to the forehead so it can lock onto prey as well as look up.

Finally, this primate-like creature takes to walking on the ground with an upright back, and there's your three-eyed humanoid.

These people are born astronomers.

The planet revolves around a red dwarf. The star occasionally goes into flares. Some of them are barely noticeable, some are powerful enough to sterilize the planet's surface with deep UV light. Most of the planet's plant life is confined to deep caverns and oceans, which smooth the daily temperature variation. The few land animals either burrow during the day, or have lifespans of several months (the average time it takes for a diurnal animal to be caught by a flare). The seasons are also very harsh, with the annual temperature variation reaching 120 C.

The only sentient creatures are diurnal humanoid hunter-gatherers, traveling between caves in the day to avoid predators. They cover long distances by foot in small groups, and have to continuosly track their position on the flat surface with little to no visible features.

They can outsmart their star thanks to their additional eye. It is larger, much less sensitive but sees sharper than their main eyes. It is used to look directly at the sun and observe its activity. These creatures predict the devastating solar flares days in advance, and build a shelter when it's time. Their secret is their rich oral tradition, which embeds a detailed guide to identifying and interpreting the features of the star into their mythology.

The use of three eyes also enables them to pinpoint the positions of stars with extreme precision, allowing to predict seasons and know when to keep gathering and when to return to the cave to wait out the deadly cold or heat. Their natural mastery of celestial navigation aids them in remembering and quickly finding known shelters.

Perhaps hunting. Having a third eye during evolutionary periods would allow for pinpointing a targets distance and location more accurately.

Perhaps it was an aquatic world at one point during evolution where having that third eye helped hunt fish with simple or no weapons.

Perhaps it's a mutation because of some catastrophe during evolution.

Perhaps it was intelligent interference from aliens.

Perhaps 3 eyed creatures are also common and it was a trait from the earliest of mammals.