What would be evolutionary reasons for a humanoid species to develop multiple arms?

I have a species that is humanoid but has two sets of arms and I was wondering what reasons there could be for why they evolved that way?

The evolutionary reason is that your humanoids evolved from an early ancestor that had a body plan with six major appendages from the central trunk (not including the head). No other reason is needed.

This is a Sarcopterygian, or lobe-finned fish: 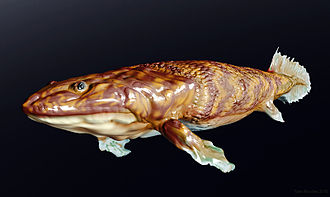 As you can see, it has four fins aside from the tail. In the Devonian period, one lobe-finned fish started to go on land a bit, and eventually produced the first tetrapods.

The word tetrapod means "four feet", which is the characteristic shared by all tetrapods (Except for snakes, caecilians, legless lizards and cetaceans). They all have four feet because the lobe-finned fish that colonized the land had four fins. But say if, in your world, there was a creature that looked like a Sarcopterygian, but had six fins, and it colonized the land, the six fins would develop into six limbs.

Much later on in the world's evolutionary history, one hexapod achieves orthostasis, walking on two legs, with the back upright and the other four off the ground.

You start with mammals that have four limbs, and then you evolve a humanoid with six limbs.

I'd suggest it might start with a founder effect. A small group of survivors carries the gene as a recessive, say. A quarter of the second generation have the trait, but since there are so few of them, it accidentally turns out to be half or more. And then by unlucky accident all of the individuals that have normal arms die.

At first it would be entirely a disadvantage. People have a second smaller set of arms with a second shoulder girdle complete with scapula on top of the regular arms. They get in the way, but not as much as they would if they were below the regular arms, or inside them, or somehow mixed with them.

The group of humanoids starts out with low genetic variation because they are descended from a few founders. The population expands fast and collects more variation, and starts to select for improved architecture for that second shoulder girdle etc. People come up with ways to use the new limbs, and that makes functional limbs more valuable. And it goes from there.

It's easier to get small, nonfunctional extra arms than functional ones. So I propose it might happen in steps. First they get stuck with something by random chance, and then they get selection for improved function.

I'd say more arms means more punches, methods of making tools, and all the things that are only able to do by arm. Since people are more proficient of using their arms than any other source of energy, it may be that humans will grow an extra, or several arms.

Then there is another reason why not. REmember the peacock's feathers, well, they're there just so that they mate. Any peacock without colorful feathers will not be able to give that DNA to it's offspring, same thing will happen to people. If people don't want to marry someone with four arms, no matter how good that person is at typing he will not pass the four arm DNA to other humans.

2
What environment would support an electric alien species?
5
What adaptations would an aquatic humanoid species need to develop sonar?
2
Evolutionary reasons for humanoid species to develop third eye
18
Would there be any major disadvantages for a species to have six legs instead of four?
7
Plausible reasons for multiple hot seasons in one solar year
4
How and Why Would a Species Evolve This Hand Structure
10
How would dozens of humanoid species affect early migrations?
2
How make look feminine and masculine (non mammalian) animal humanoids?