Other than tentacles and jointed digits, what methods of holding items are there that provide similar dexterity?

I'm trying to envision a creature that is highly dexterous, and adept at using tools, but every time I try to think of a possible grasping appendage, the only two I come up with are either tentacle like appendages (cephalopods) or jointed digits (humans).

I want to create a sentient life form with neither tentacles or digits, but the closest thing I could think of is an inflatable appendage that can envelop objects, and I don't think that would be good for tool usage.

Geckos can stick to surfaces because their bulbous toes are covered in hundreds of tiny microscopic hairs called setae. Each seta splits off into hundreds of even smaller bristles called spatulae. Scientists already knew that the tufts of tiny hairs get so close to the contours in walls and ceilings that the van der Waals force kicks in. This type of physical bond happens when electrons from the gecko hair molecules and electrons from the wall molecules interact with each other and create an electromagnetic attraction.

Now researchers have discovered how a balance of forces acting on the gecko and the angle of its toe hairs contribute to the creature's sticking success. The system makes it possible for geckos to stick and unstick their feet so quickly that they can scurry across surfaces at 20 body lengths per second.

Let's say your aliens are arachnids, and the spidery-like points of your legs have small, sticky hairs that have evolved over time to provide you with "fine hair control." You can roll a coin around the tip of your leg and even flip it into the air with the hair control. Your human friends watch in amazement as you manipulate delicate tools and parts with ease.

After which you can climb the wall to get to breakfast on the 2nd floor. 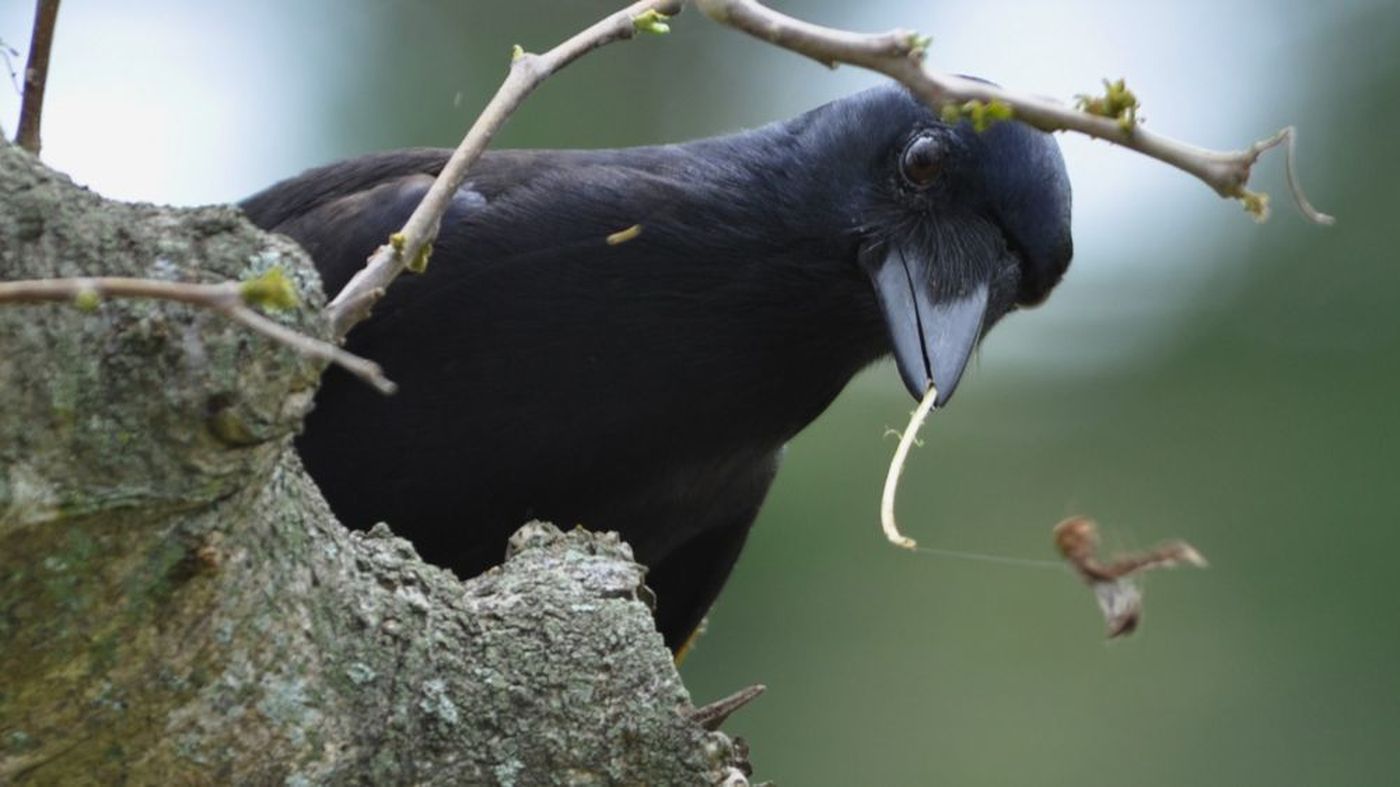 By using tomography scans, Hiroshi Matsui and his team were able to compare the shape and structure of the NC crow’s bill with that of its close relatives. Their conclusion, which they report in the March issue of Scientific Reports, is that this shape makes the handling and manufacturing of tools easier. Looking at photos of the birds in action, it feels intuitive that the more exaggerated curve of a raven or American crow bill would have a hard time achieving the dexterity that NC crows need to use their stick and hook tools.

If birds don't do it for you, you could create a creature in which each pincher-like claw functioned the same way as a crow's beak. Some existing creatures have many claws. 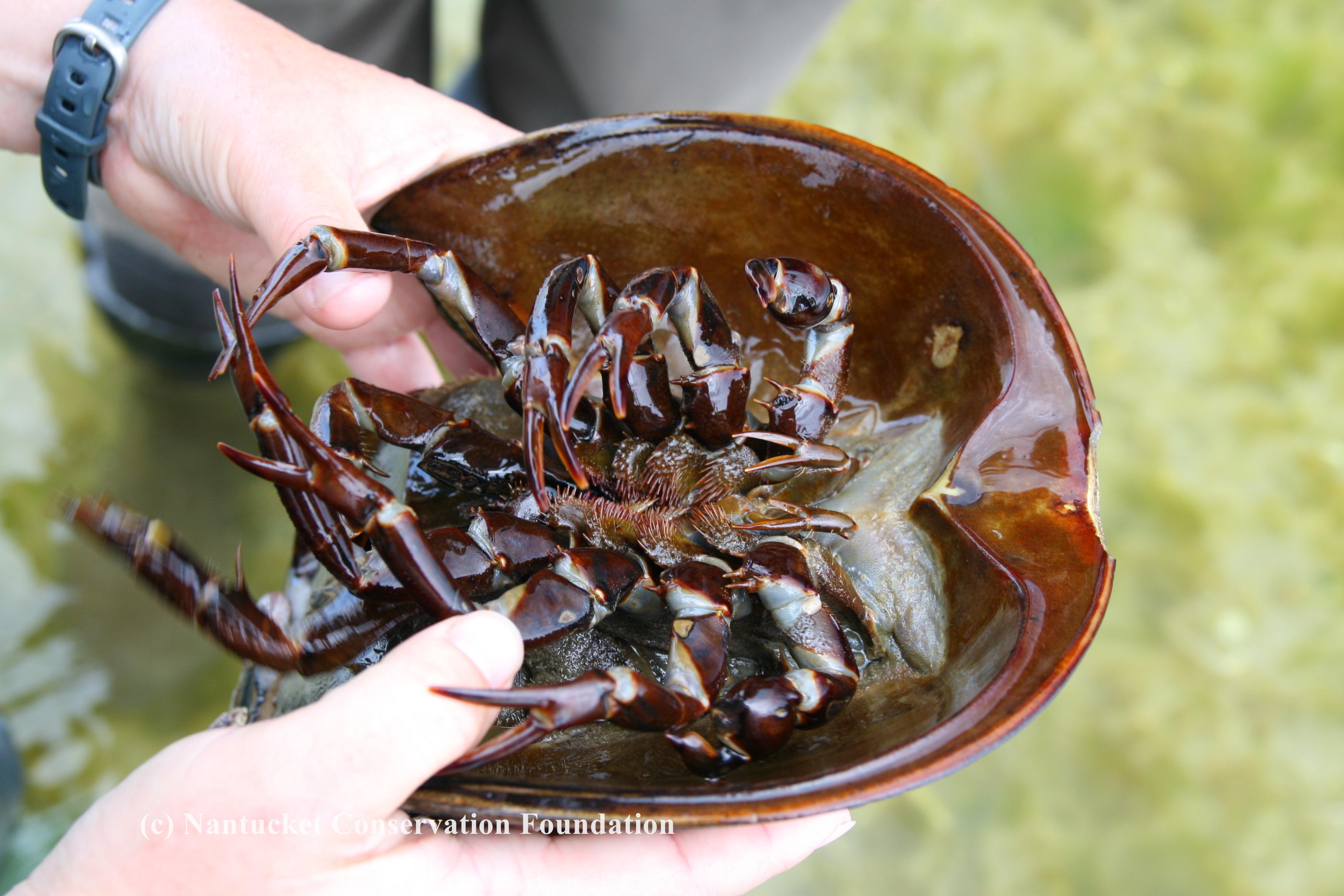 Tongue has no bones but is pretty dextrous, elephants trunk is even better since it can grasp objects.

So your creatures could have muscular appendages like those with apposing surfaces for fine grip.

Larry Niven came up with something. The pearson's puppeteers use their mouths and knobby muscular lips. they can get extra strength from hte jaws or fine manipulation from the knobs, which are purely muscular. Here is just one of many sketches of how they work for Barlowe's Guide to Extraterrestrials. 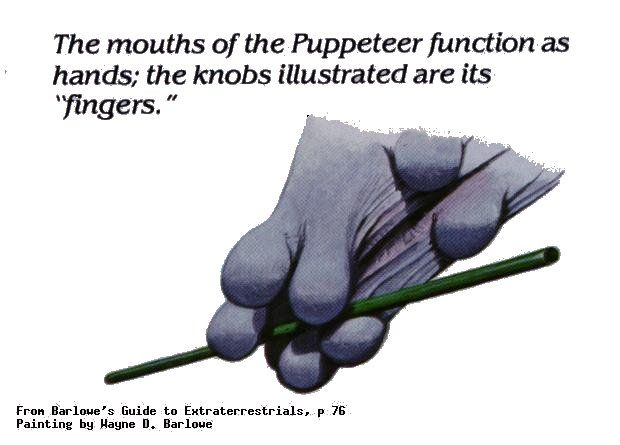 Magnetolike: The ability to create strong magnetic fields in order to suspend ferromagnetic and paramagnetic materials.

Acoustic: Using varieties of sound waves to levitate objects (use tools with higher amounts of precision)

Symbiotic creatures: A symbiotic nervous relationship with another organism that has grasping power (head crabs from halflife)

Tails: I don't even need to tell you about monkeys and their fifth hand.

An inflatable appendage is actually a bit more practical than you might think- the University of Chicago came up with something similar a few years ago as a 'universal gripper'. In essence it's a sandbag and a vacuum with the principle of operation being the flexible outer allows the particulate matter inside to flow around the object being picked up. It then sucks all the air out of the system while pushing down, pulling the particles rigidly together. It gives you a compliant grip on anything the membrane/particulates can flow into.

A similar mechanism could be evolved pretty easily- a membrane full of ingested sand that the being inhales against to pull it together.

There's a video of it in action below: https://www.youtube.com/watch?v=0d4f8fEysf8

Although highly unlikely, perhaps your creatures can develop tractor beams controlled by an eye-like laser organ. This would make them telekinetic and depending on the size of the beam, this can far exceed the dexterity level provided by biomechanical manipulators like tentacles or jointed digits.

You can start by knowing that biological lasers are already possible.

This is how they worked from laboratories. 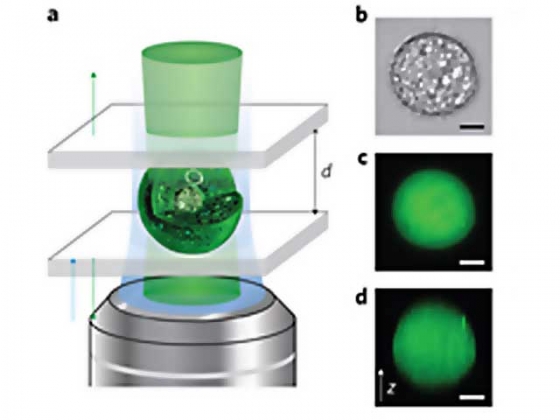 Figure a: Reflective mirrors are arranged facing each other, sandwiching a cell between them. The cell acts as the gain medium, transferring some of its energy to the light shone on it from below. The two mirrors imprison light waves that are incoherent with the cell-amplified light, allowing only the coherent amplified light to get out of the mirror prison.

Figure b: Microscopic image of the cell.

Figure c & d: Image of the coherent light emitted by the cell.

There are a lot of uses for lasers other than tractor beams, but hopefully your creatures do not evolve to figure them out. If your creatures somehow learned how to freeze objects by adiabatic laser cooling or simply burn them with sheer ionizing radiation, then I don't know how much more dexterous they can get.

How about air or water jets? I think of a nose with many independently orientable openings, that can finely manipulate air streams.

For such a life form tool use would probably look very different from us. Rather than a knife, they might use a stream of sand for cutting. For more human like tools holding them might be more akin to juggling them between air streams.

This sort of alien could have evolved to handle very hot or poisonous objects, that it can't touch directly.

I'm not sure if this would count under Willik's answer, but I am sitting next to my Labrador here and she is perfectly capable of moving things with her jaws. She has a bright mind, but really it's that feature - fine motor skills - that she lacks to manipulate things carefully.

Picture an animal with four separate rows of teeth - four "jaws." In it's natural environment, it straps itself to prey and must use fine motor skills to avoid something dangerous in the animals (quills, fangs, etcetera). Once it's muscles have the animal in control, it locks down with it's jaws and consumes it whole.

The animal I just described is almost real, like a boa constrictor, which is a snake. I've seen handlers with those guys a bunch when I was younger. But surely a snake with a full brain could learn to use its jaws for more than consumption - although I shudder at the thought.

An animal with a number of teeth like that would need a mammal brain, but that would be about learning, which is more crucial than appendage, and not what you asked.

Your hypothetical creature can fill a compartment of its body (like a mouth or pocket) or just cover the object with a thick goop which is laced with muscular fibres. With concentration, the creature can manipulate the fibres to pull and push various parts of the goop in meaningful ways.

More can be achieved if the gel can be made sticky selectively to grip objects inside it.

I'm imagining an evolution of something similar to the dendrites of a sea-cucumber, shifting from being a mass of tendrils to a milky haze in the water wrapped in mucous.

Also compare and contrast Sea-Stars/Starfish and their strategy for eating oysters, they pry open the shell a crack and then force their own stomach physically out of their mouth into the oyster's shell to consume it from the inside out.

Have multiple single-segment arms that each can fling a net at the object to be manipulated. When the object is caught by multiple nets, it will be possible to tilt or pull the object in various directions.

In the Niven / Pournelle classic Footfall, they speculate regarding an alien species that is extremely reminiscent of Earth's elephants. This hypothetical species uses its trunk as a "hand".

48
Are there any real world examples of where a desert and a swamp meet each other?
7
Is it plausible that there could be an alien species that has the capacity to mate with and share genetic material with many other alien species?
13
What minerals that are more durable than calcium would be suitable for bones?
11
What metals other than calcium can be used to create alien bones that won't also engender a human-toxic environment?
6
Feasibility of a species based on Yog Sothoth (HP Lovecraft lore)
1
Feasibility of a species based on Nyarlethotep (of HP Lovecraft lore)
1
What modifications are needed to have plants that can grow and survive in a world of sugar and sweetness?
0
outside of cold working method, is there other methods to forge metal that constantly below sub zero temperature?