Gravity being weaponized for its time altering properties

Physics isn't my strong suit, but I'm trying to understand if something could be theoretically possible in some highly advanced future:

Would it be possible for an advanced civilization to invent a weapon that uses gravity to freeze a person, a vehicle or spaceships in a time bubble? My understanding of physics is that, the more gravity you exist in, the slower time goes for you, relative to anything outside of this gravity pull.

In theory, if you could wrap a person, place or thing in a gravity well, you could almost freeze their existence relative to you. From your point of view, they would appear to be frozen in time, and from their point of view, if they could see outside the well, everything would be going at a super fast rate. This would enable the gravity well creator to do a variety of malicious things to the trapped victim.

Is that how a weapon like this could work? Am I missing something?

To be able to weaponize gravitation it would be necessary to bend the curvature of spacetime in a localized region. Instead the region where the spacetime curvature has been massively increased there would be a massive increase in time dilation. Time dilation will mean inside that localized region time will be slower compared to the time outside it.

Will the enemies of the person trapped in the time dilation bubble be able to do lots of nasty things to their victim? Yes they can, but it might be difficult to do much that is useful or effective. The victim is trapped at the bottom of an immensely deep and powerful gravitational potential well. Sending anything down into it cause it to arrive at a velocity close to lightspeed. That's good for destroying someone, but not very good for tweaking their body in some naughty ways.

The amount of time dilation necessary to trap someone inside a slow time bubble will be the equivalent of the time dilation of being very, very close to a massive black hole. This is the catch: the amount of energy needed to do that will be astronomically stupendous. Probably, about the mass-energy equivalent of that massive black hole. Possibly, this might be conceptually bypassed if the curvature of spacetime can be increased as if mass was present, but the increase in curvature can be done with incredibly small amounts of energy (relatively speaking).

In conclusion, weaponizing gravitation would need to be accomplished with a form of physics unknown to current science. This can be assumed to involve techniques for increasing the curvature of spacetime and not adding remarkably huge of mass to the location of the time dilation bubble. To anyone inside the time dilation bubble will see time passing slowly outside the bubble and people outside the bubble will time passing slowly inside it. Sadly, its practicality as a weapon isn't very practical. Not unless you want to do something extremely nasty and deadly.

Gravity is a terribly weak force. The amount of mass it takes to deliver some damage with gravity is several order of magnitudes higher than the amount needed to deliver damage by just adding some kinetic energy to it.

I mean, a few grams bullet can already kill a man, while the entire ISS, with its several tons mass, cannot even contain itself into its Hill sphere.

Additional inconvenient, if you are going to encapsulate your enemy in black hole gravity well, you (and all you want to protect) have to be sure you are far away enough, unless your enemy is so nice you want to spend the eternity around them.

So, a weaponized gravity would be really unpractical.

To properly understand this question you must first look at what time-space dilation really is. It is the effect of seeing the image of the thing slow down because of the effects of gravity on light. To create a system where the shooter sees a more or less "frozen" image of the victim, you need to put them in a gravity well with an acceleration just under the speed of light. (If you match it exactly, then your light can not travel out and you don't see them at all.) So if you do this the outside observer will theoretically see a frozen image of the target while the target is actually being crushed and killed at relativistic speeds; so, the target will not be alive to observe anything happening outside of the gravity well. You are not so much seeing a person frozen in time as you are the optical illusion of it.

Then there is the critical caveat which is why said "theoretically"... Gravity has a very long reach for its strength. If you are close enough to fire a black hole weapon at someone and observe them, then you are also close enough to go flying into the black hole yourself. This means that you will match the inward acceleration of gravity allowing you to experience the light hitting your eyes at more-or-less normal speeds. If your brain was capable of processing what you saw in the next fraction of a microsecond, you would see your victim implode while you go flying into that infinitely collapsing area of space, but because the molecules in your body are at different vectors to that point of gravity, your body will also be collapsing killing you before you actually reach the point of your victim. 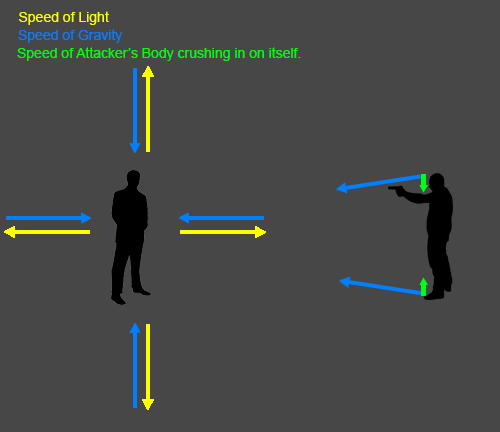 Not the answer you're looking for? Browse other questions tagged weapons gravity time-manipulation or ask your own question.

4
Planet-enshrouding weapons grid
37
What kind of realistic ranged weapons would be effective in spaceship combat?
3
What weapon would be used by a civilization living 10 000m underwater?
14
Junkyard planet trash distribution?
4
I have made a design for creating artificial gravity on low gravity worlds for my world, does it work?
5
How to weaponize gravitational waves
0
Time Dilation and Multistage Terraforming/Colonization